The Friends of Pukekura Park have been actively recording and mapping significant plants in Pukekura Park, New Plymouth for two decades. There are now some valuable citizen science resources to share.

Introduction to 'The Significant Plants of Pukekura Park',[edit | edit source]

There are innumerable significant plants in Pukekura Park and Brooklands. 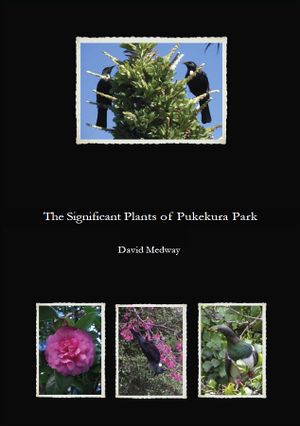 Our mission was not to document all of them. It was to document significant plants of 500 species and varieties.

All of the park’s notable trees as recorded by Smith and Fuller (2007), with the exception of several of their kauri, are included in this catalogue. Twenty-two trees in Pukekura Park were included in the New Zealand Notable Trees Trust New Zealand Tree Register (www.notabletrees.org.nz) as at 1/1/2013. They are specimens recorded as: Rhopalostylis baueri, Platanus occidentalis, Camellia japonica ‘Pukekura’, Camellia japonica cultivar, Phoenix reclinata, Castanea sativa ‘Paragon’, Camellia sinensis, Vitex lucens (2), Fagus sylvatica var. purpurea, Fagus sylvatica ‘Riversii’, Corynocarpus laevigatus, Dysoxylum spectabile, Aesculus x carnea ‘Briottii’, Pinus radiata (3), Cupressus macrocarpa, Pinus torreyana, Araucaria heterophylla (2), and Ficus macrophylla. Two of these specimens, a Pinus radiata and a Cupressus macrocarpa, are considered to be notable specimens of international interest. Four of them are no longer extant. The others are also included in this catalogue.

Only five trees in the park are included, under DP 26–30, among the notable trees in Appendix 13 to the New Plymouth District Council 2005 Operative District Plan. They are recorded as one Ginkgo biloba, two Araucaria heterophylla, a Quercus ilex and a Fagus sylvatica var. purpurea. The last is no longer extant.

The late David Medway was a lawyer and a noted ornithologist with a lifelong interest in birds and their sources of food. He realised that he lacked knowledge of plants and trees which birds frequented so he set about studying them and soon became obsessed with their true identification. During 2007, when the Friends of Pukekura Park were commissioned by the New Plymouth District Council to undertake research to identify three hundred significant plants within Pukekura Park, David keenly took up the challenge with his knowledge and ability to research the subject. The number of plants grew to a great many more over the intervening years. Early records had often not been referred to in managing the park. Plants had been removed or relocated without reference to their historical values. The Friends had had a long-running objective to record the history and botanical significance of plants in the park and had been accumulating information through several other projects, such as the Kete and GIS projects.

David was on a treasure hunt, he spent innumerable hours collating information and tracing early sources for extra knowledge of a subject which had not normally been easy to research. He undertook a monumental task, incorporating the rich history with correct nomenclature and classifications, in this labour of love which took eight years to complete and which became an obsession as he discovered more details.

This publication represents the completion of his work. It has been collated and finished with the help of Elise Smith, Jasmine Lister and others since his sudden death in 2013. It has been adapted for use by modern technology, but it is fitting that it has been printed in hard copy form as he would have desired.