Tinca tinca is a fish large (maximum length 70 cm) native to Europe. They are a cyprinid fish, belonging to the same family as goldfish, rudd, and koi carp. They were first introduced to New Zealand in 1867 as a sports fish. Although most fishing for tench occurs in the Auckland area, tench are also present in some lakes and ponds in Northland, Tauranga and Wellington. They are also present in the South Island near Oamaru and have been found recently in Nelson, Marlborough and Canterbury during recent surveys by the Department of Conservation. A golden variety of tench, which is bright yellow-orange, is thought to be present in some small lakes and ponds near Auckland. This variety of tench was illegally imported in about 1980.

Tench is a deep-bodied muscular fish generally an olive green colour although this varies from dark to light. Smaller fish are brown to a brassy tan colour. There is a single small barbell at each corner of the mouth. The fins tend to be thick and fleshy and the body is covered in small scales. Their eyes are a distinct brick red, and this is their most distinctive characteristic. Tench have no teeth but have a relatively large mouth, and probably feed using suction to ingest their prey (most aquatic invertebrates). Adults are usually 30-40 cm in length. Fish over 2 kg in weight are not uncommon, and in some instances, 4-kg fish have been caught.

Tench generally live in still or slow-flowing waters and are carnivorous, feeding mainly on crustaceans, molluscs and insect larvae. Males have longer and fatter pelvic fins than females. Spawning occurs in spring and summer and, like all the Cyprinidae, tench are prolific breeders; a large female may produce hundreds of thousands of small eggs. In the winter time, tench hibernate in the mud at the bottom of deep pools.

It is thought that tench are unlikely to pose a direct threat to other fish species in lakes and this is likely to include New Zealand’s native fish. However, tench have been implicated in environmental changes including reduced invertebrate densities, reduced macrophytes (aquatic plants), and/or reduced water clarity in shallow lakes and ponds. 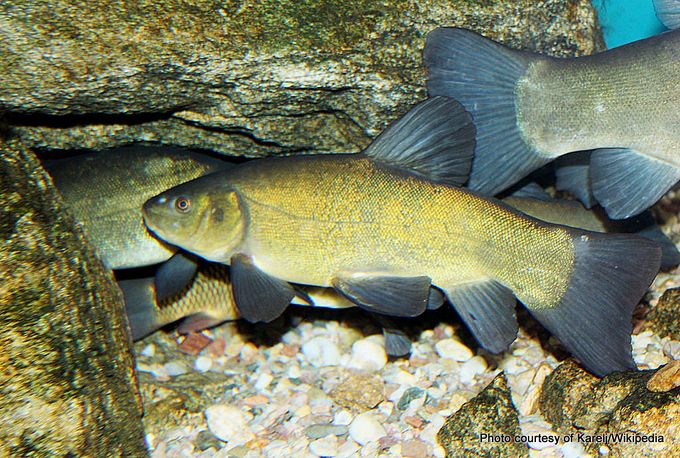