The Yellow Admiral (Vanessa itea) is a butterfly native to Australia, New Zealand, Lord Howe and Norfolk Islands. The Maori name is kahukowhai, which means "yellow cloak". It is a medium-sized butterfly, with a variable wingspan of 48 to 55mm in New Zealand. The upper side of the forewings are dark brown to black toward the outer edges, with three small white patches and a wide, bright yellow bar, and dull red nearer the body. The rear wings are dull red with a black border and a row of black circles with light blue centres near the edge. The underwings are very different - the rear wing is various shades of brown with cryptic, irregular markings; the underside of the forewing has a blue 'eye' on a black background that is highlighted by a yellow area above and below. There is no colouration or wing marking differences between sexes.
Yellow Admirals are relatively common throughout their range wherever their food plants occur. They appear from October to March. They prefer open country, wastelands and gardens where stinging nettles, Urtica incisa and Urtica urens are present. It is found at up to 1000m above sea level. It is a strong, fast flier, and is thought to survive wind-blown travel from Australia to New Zealand, across the Tasman Sea.

Mating which occurs late afternoons or early evenings is preceded by a period of active chasing by the male. Ovipositing usually follows after 24 hours. Its eggs are light green, vertically ribbed and barrels shaped and are less than 1mm in diameter. They are usually laid singly, sometimes in pairs, onto the nettle leaves that the larva will eat. They hatch after 8-9 days.
The caterpillars vary from black to grey, yellow-green or brown, with lighter coloured lines and spots running laterally along its back. They are covered in several rows of spiny protrusions. They have six true legs and ten prolegs. They prefer to eat the nettles, Urtica incisa, Urtica urens. They feed at night; during the day they hide in a curled leaves that they have tied together with silk for protection from predators. They grow to about >36mm long before pupating. The larval stage is about 6-7 weeks.
The irregular-shaped pupa is about 15-20mm long and is of grey or brownish in colour. They have sharp bumps and has two white/silver spots on each side. Sometimes the pupa can have gold patches, and occasionally the complete pupa is a metallic gold. Metamorphosis takes about 12-14 days till the butterfly emerges.

The caterpillar predators are the praying mantis, wasps, soldier bug, and spiders. The pupae are sometimes infected by the parasitic wasps, Echthromorpha intricatoria (White-spotted Ichneumon wasp) and Pteromalus puparum which was introduced in 1932 in an attempt to control the spread of the cabbage white butterfly.

The flight period of the adult covers all the warmer months of the year and so varies with location. Individuals may live for several months. The adults feed on nectar from available flowers and ripe fruit and sometimes sap seepage from trees. Normally the last of the season’s brood survive as larvae until the next season, but in some areas, it survives as a dormant adult over winter. 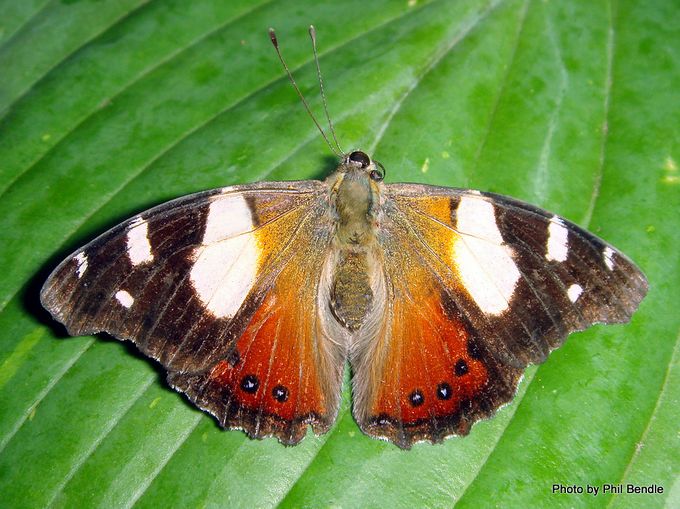 Sitting with its wings together. 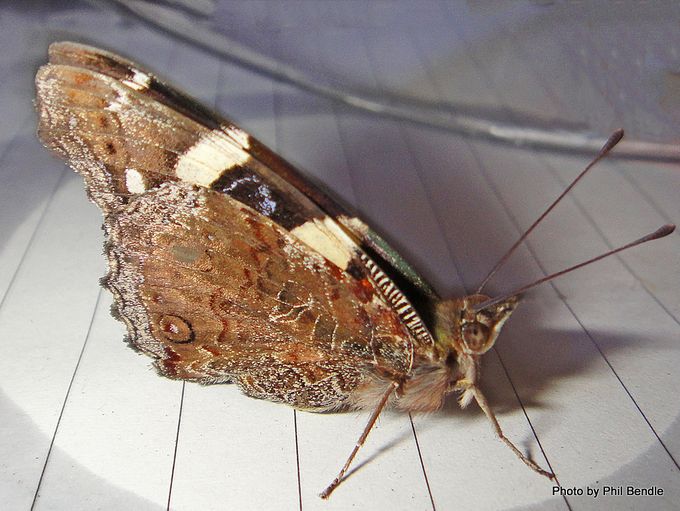 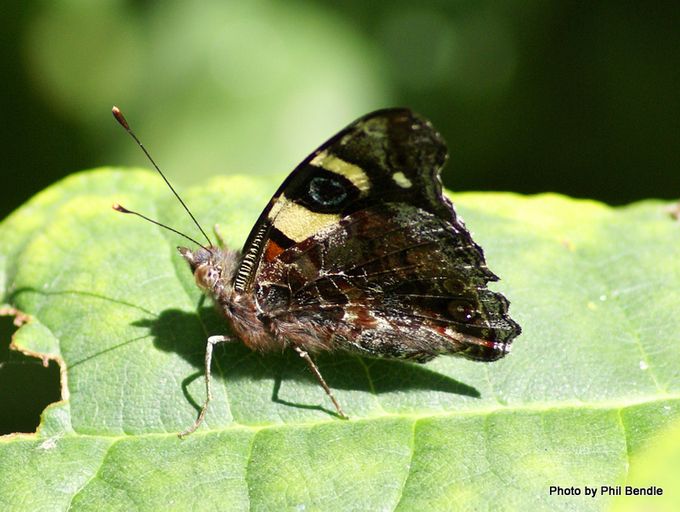 The underside of Yellow Admiral 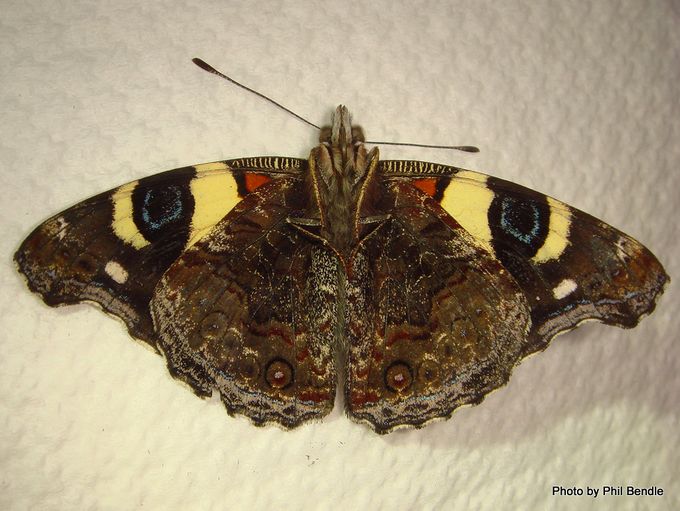 The butterfly's compound eyes and its proboscis (galea).used for feeding on nectar. 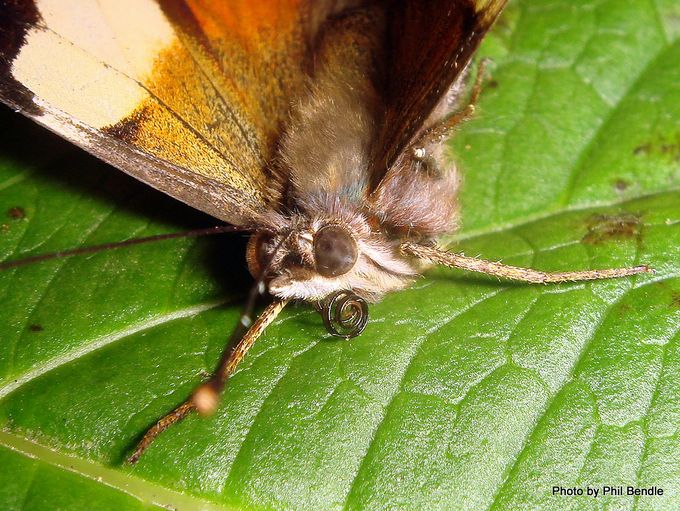 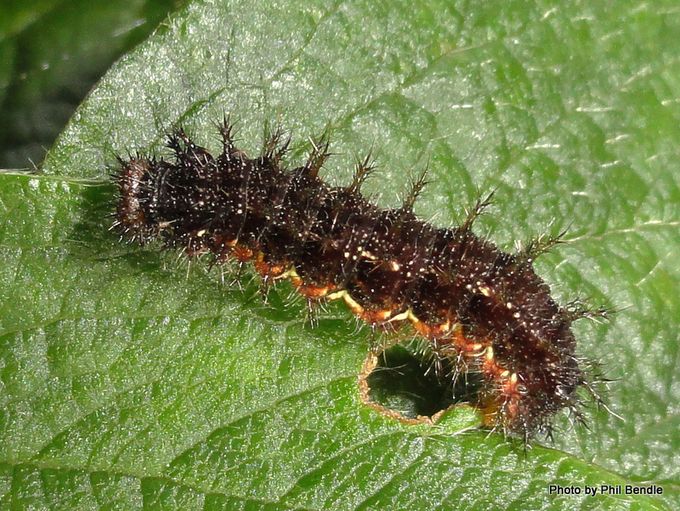 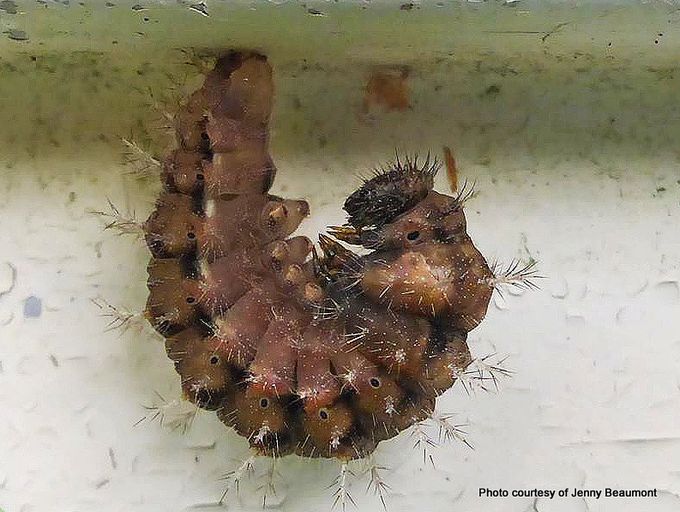 As the larva stretches, a split appears on its back and gradually extends as the old skin peels revealing a green chrysalis underneath. Where once there was a row of bristles tubercles now stand. It will now pupate for 2-3 weeks. 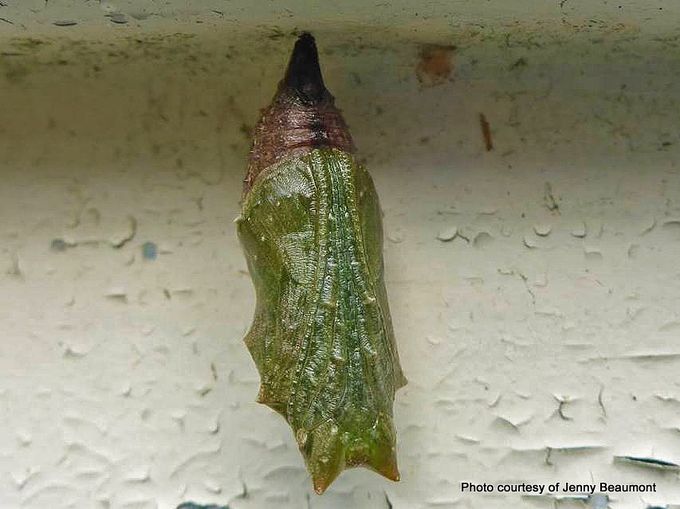 The caterpillar’s redundant tissues are now consumed by its own digestive juices, leaving only a few crucial cells called histoblasts which have lain dormant, until now. These histoblasts obey hormonal instructions and begin to mutate, creating many different tissues and organs the future butterfly will need. First to arise is the ectoderm, which develops into the skin, brain, mouthparts, the lens and retina of the eye and the nervous system. Cells in the endoderm form the digestive and respiratory tracts, while the mesoderm cells provide the butterflies musculature, excretory and circulatory systems. When the butterfly is ready the pupa splits and the emerging wet, wrinkled adult hangs upside down while haemolymph is slowly pumped into its wings. 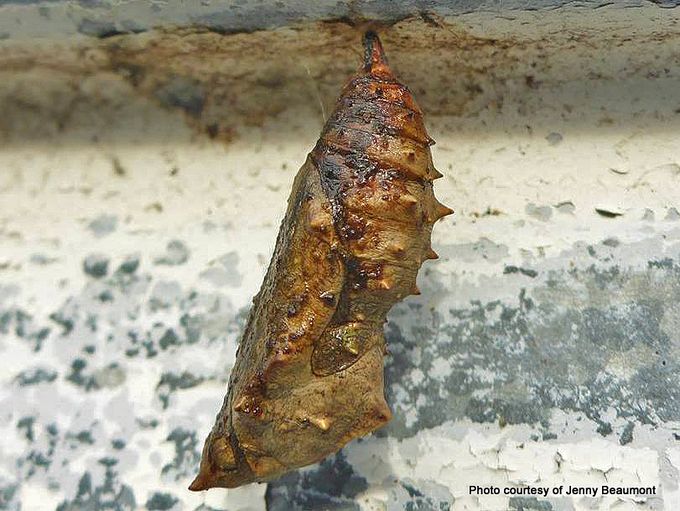