Acacia mearnsii is a non-thorny, fast-growing, extremely invasive leguminous tree native to large parts of south-eastern Australia and Tasmania. It is now classed as an environmental weed in China, Japan, Taiwan, India, Israel, southern Europe, southern Africa, Madagascar, New Zealand, south-western USA and some oceanic islands with warm climates. It has been nominated as among 100 of the "World's Worst" invaders by the IUCN Invasive Species Specialist Group.
Acacia mearnsii was introduced into New Zealand in the late 19 early 20th centries for use in the tanning industry because its bark, sap and leaves contained large amounts of tannins (they are astringent, a polyphenolic biomolecule that binds to and precipitates proteins and various other organic compounds including amino acids and alkaloids). It was also introduced an ornamental tree but it has now escaped and now inhabits waste places, scrubland, pastures and riverbanks. It is common north of Hamilton but can be found throughout the North Island. On the South Island, it is found in Nelson, Marlborough and on Banks Peninsula.

Acaciamearnsii is around or shapeless evergreen shrub that can grow into a large tree up to 20 m in height. It has no thorns and its branchlets are shallowly ridged. All parts are finely hairy. The trunk’s bark is smooth, grey, with age it becomes black and fissured, and it can split to give a resinous gum.
The tree has dark dull olive-green leaflets that are twice-compound (bipinnate), and each part of the compound leaf (leaflet) is extremely small (less than 4 mm long) and covered in fine hairs. These leaflets are densely packed together. Raised glands occur at and between the junctions of pinnae pairs.
In New Zealand Acacia mearnsii flowers during July, August, September. The inflorescences consist of many fragrant, pale creamy yellow globose (spherical) heads arranged in racemes.
The seed pods can be straight or twisted. They are a dark brown when ripe, and are up to 10cm long with 3 to 12 joints between the seeds. Seeds are produced in large numbers and they have been known to germinate after 90 years. They are spread by wind, gravity, water movement, contaminate soil, rodents and birds. 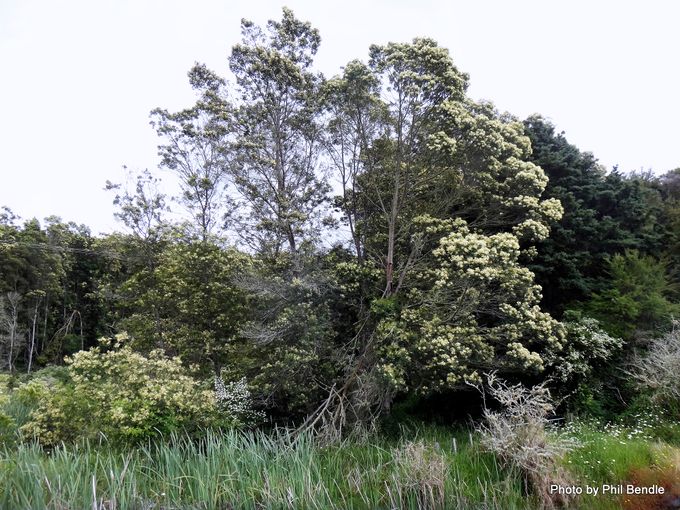 A large stand of wild  Acacia mearnsii. The white-flowered shrubs in the foreground is Privett 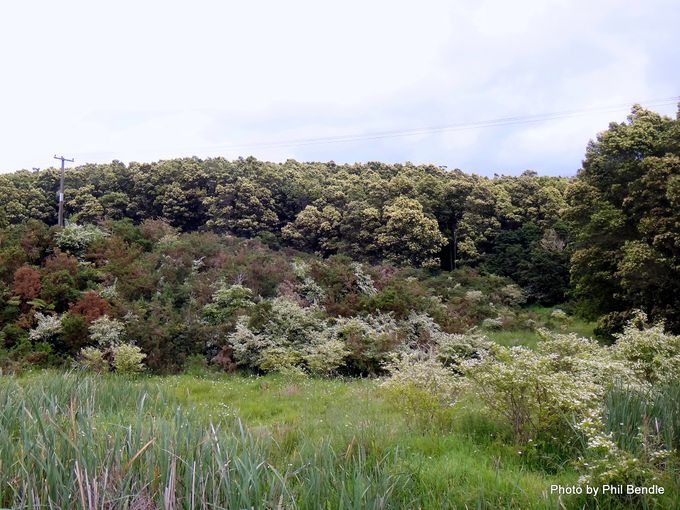 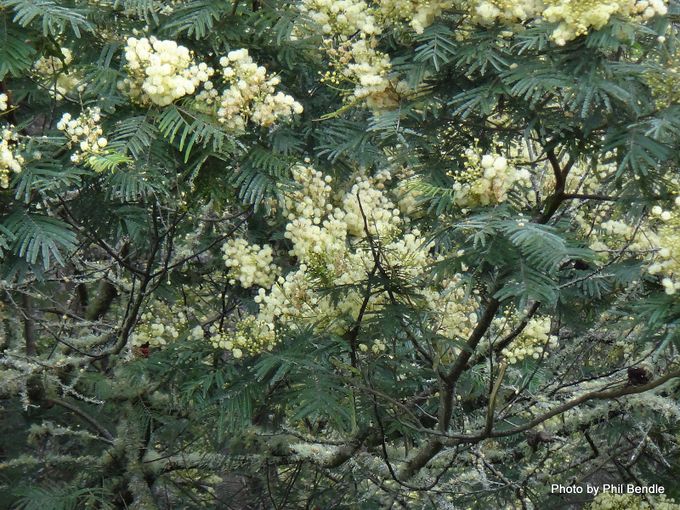 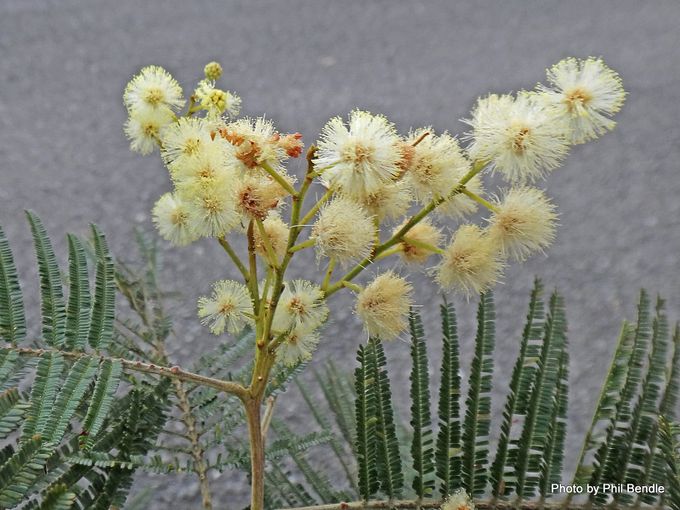 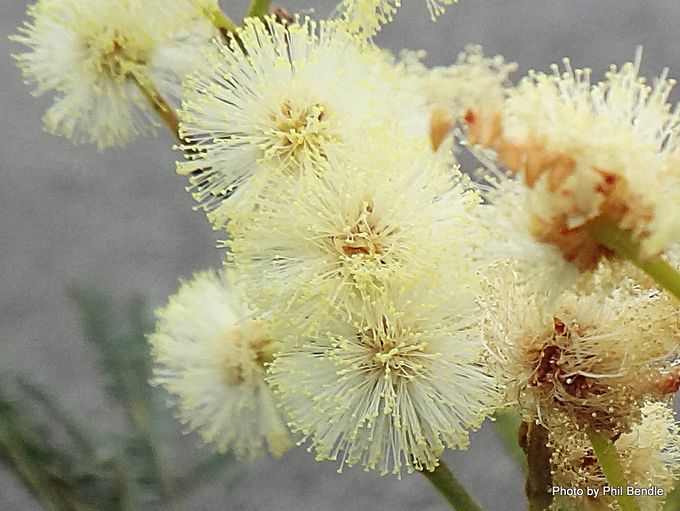 The upper surface of the leaves. 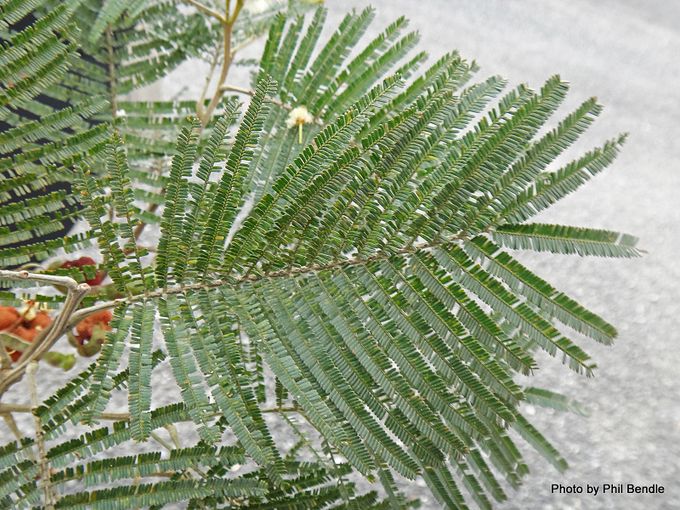 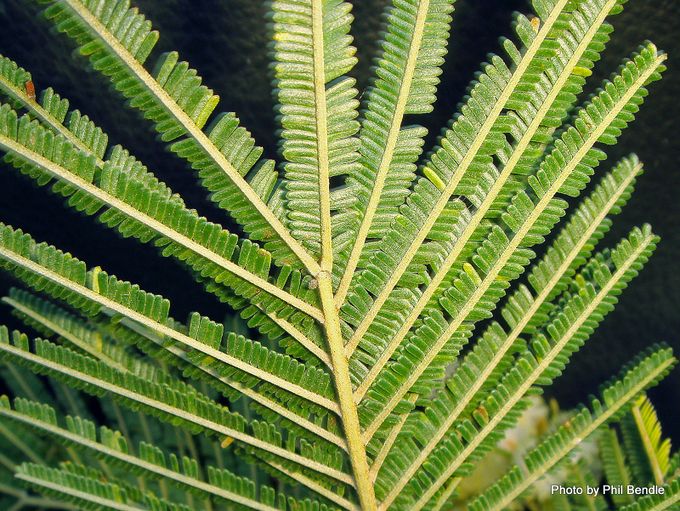 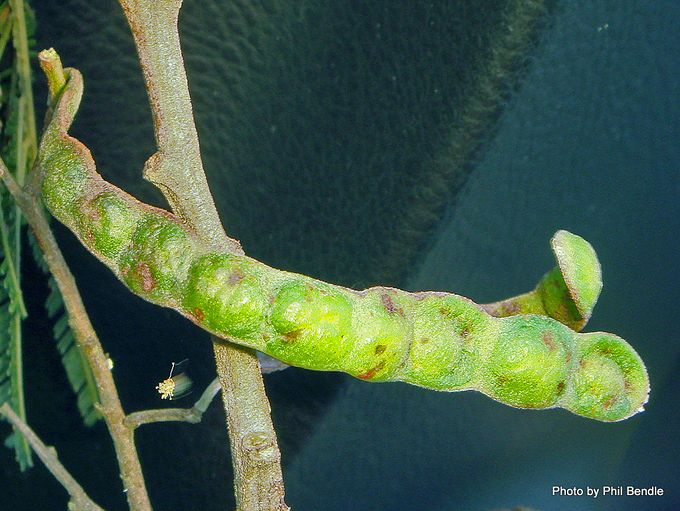 There is a gall-forming midge Dasineura rubiformis that has been identified now in New Zealand. Dasineura rubiformis affects the reproductive ability of Acacia mearnsii by forming galls on the flowers and preventing the formation of fruit, but otherwise, it has no effect on the growth of the tree.

The more common gall seen is Uromycladium notabile a rust fungi in the Class: Urediniomycetes (Photos below) 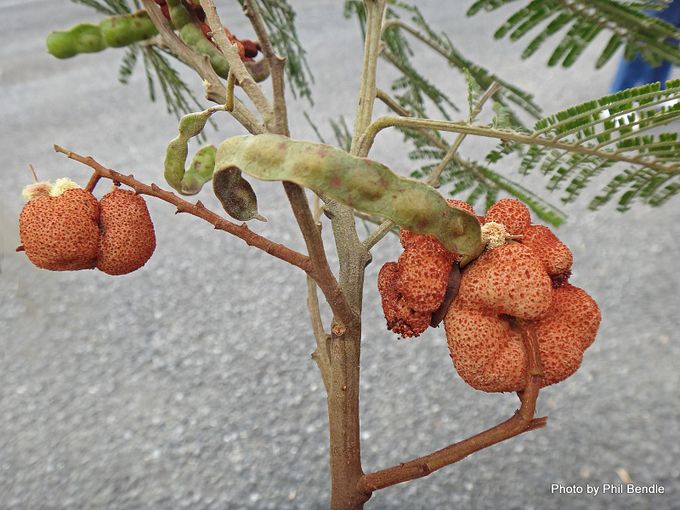 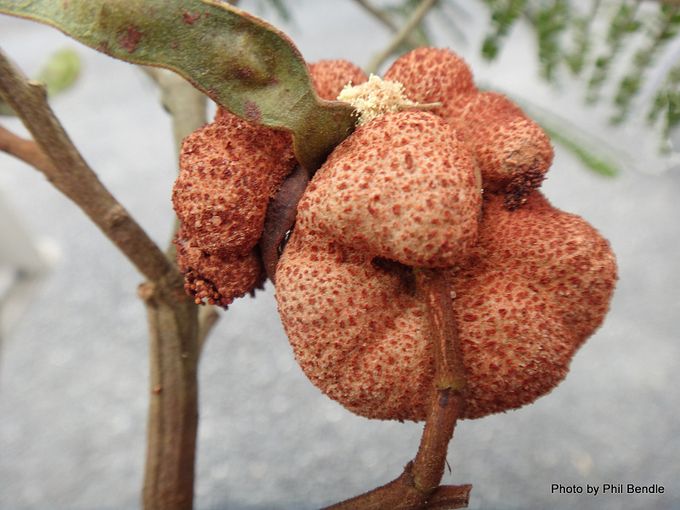 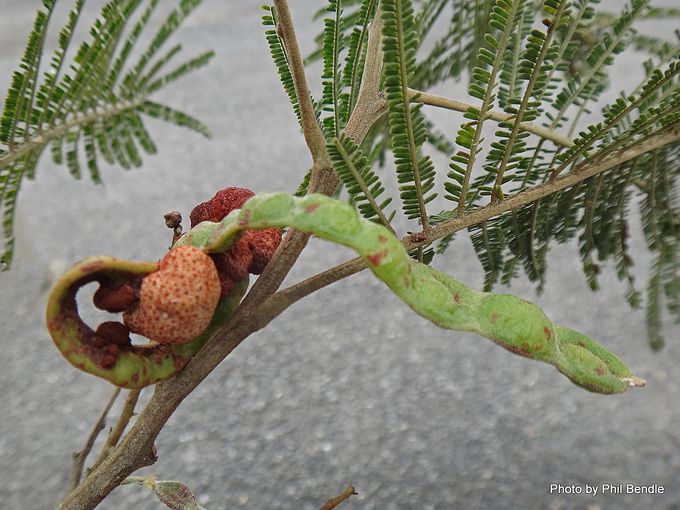