Achroia grisella is a small moth of the snout moth family of Pyralidae. Achroia grisella resides in most of the world milder climates including New Zealand. Galleria mellonella (Greater Wax Moth) which is also found in New Zealand is a close relative. Both these wax moths are pests of apiculture.
Their lifespan is about 7 months, from egg to adult. They are holometabolous, which is they go through four stages in their life cycle – egg, larva, pupa and adult.
The adult moths are >15 mm in length and have a wingspan of 11-14mm. Their wings which are a grey/brown/bronze colour are folded at a shallow angle over the top of the body. The head is yellow. The adult moth’s mouthparts are atrophied, so they do not feed. They fly mainly at night, during daylight they rest in dark places.

The female moth lays up to 300 eggs in cracks between bee hive parts or in groups on the upper side of cells. The hatch larvae cause most of the damage to honeycomb. The larvae are the only ones that eat. Their diet typically consists of honey, beeswax, stored pollen, bee shell casings, and in some cases bee brood. Tunnelling through honeycombs will not only provide food but also protect the larvae from the defending worker bees. They will also burrow into the hives softwood frames.
When the larvae reach full size it spins a cocoon (about 12 mm long) made from material excavated from the surface on which the larva pupates. Depending upon temperature wax moth pupae may hatch rapidly or take up to two months to change to the adult stage.
The Lesser Wax Moth larvae are unable to compete with Greater Wax Moth larvae as the latter will eat them.
When the colony is going through a period of stress, such as after the loss of its queen bee or under starvation conditions, these moths may completely take over the hives honeycombs.

Achroia grisella larvae are widely bred as food for pets such as lizards, birds or fish.

Below is a formula recommended for a wax moth trap.
Mix 1 cup of sugar, 1 cup of vinegar, a couple of banana skins chopped up and put in a two-litre milk bottle with a 50mm hole cut out of the front. Top up with water and hang it close to the hive. The banana skins and sugar will ferment attracting both wax moth and wasps which will drown in the mixture.

The moth with wing folded over the body. Its yellow head is visible. 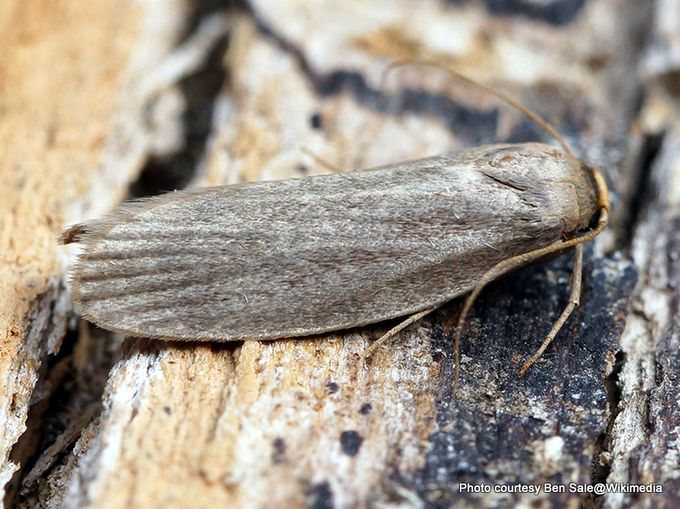 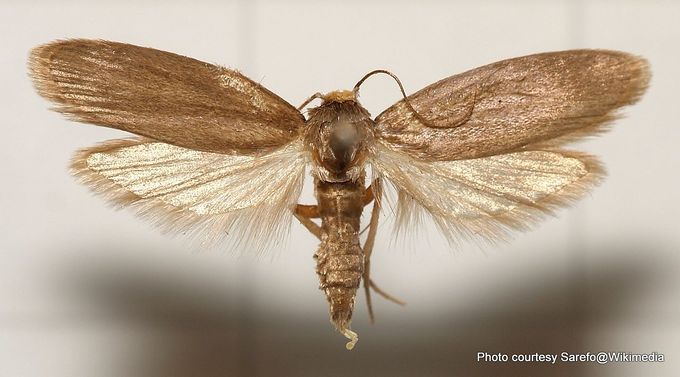 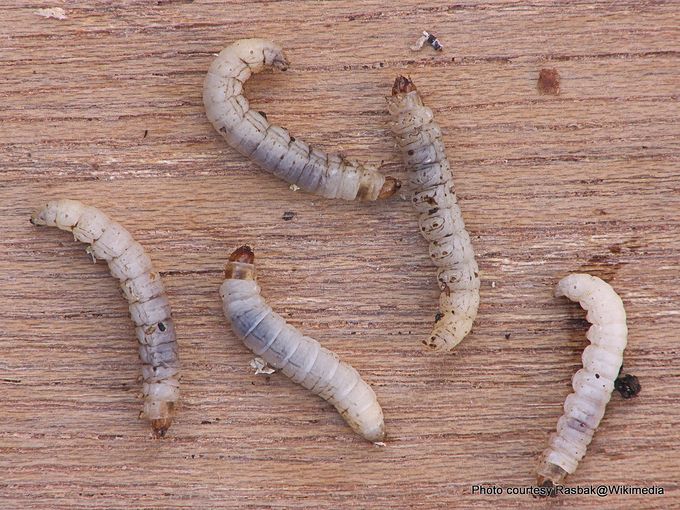