The Puriri moth is the largest moth in New Zealand and is found only in the North Island. They can be seen September to March. The newly hatched (neonate) caterpillars live on fungi. Larger caterpillars make a refuge tunnel in the trunk and branches of a wide variety of trees and shrubs. Host plants include native, naturalised, and cultivated species.  It gets it name because one of the main host trees is the Puriri tree (Vitex lucens).
The caterpillars damage the tree by making radial and vertical burrows in live wood, in which the body of the caterpillar rests. At the entrance to the burrow, they graze on the cambium, forming a diamond-shaped feeding scar. They cover the scar and burrow with a tough web that is coloured like the bark of the tree. Pupation occurs in the tunnel. After the moth has left the pupa, the hole may grow over or remain open. Heavy infestations can weaken the tree, especially those with thin trunks.
Caterpillars can also infest non-host trees, such as cherry (Prunus) and Eucalyptus.
The adult moths are active at night and do not feed as they have no mouths and live for about 48 hours.

Puriri Grubs
The puriri moth (or "ghost moth") invades the living puriri trees and riddling them with burrows.
A fertilised female moth lays up to 2000 eggs on the forest floor. After about 14 days caterpillars hatch and live on the underside of fungal fruiting bodies. This stage lasts for 2 to 3 months. At the end of this phase, the caterpillars climb and bore through the bark into the wood of the trunk or a branch of a tree. Host plants include native, naturalised, and cultivated species. It gets it name because one of the main host trees is the Puriri tree (Vitex lucens).The caterpillars form a distinctive seven-shaped tunnel. The top of the ‘seven’ follows the radius of the trunk/branch and slopes upwards. The longer part of the burrow descends vertically and is where the caterpillar rests. The opening of the burrow and the area used for feeding are not usually visible, as they are covered with a silk covering that mimics the bark.The tree phase caterpillars graze on live callus tissue that develops around the opening of the burrow. A mature caterpillar can grow to about 100 mm long and 15 mm in diameter. Caterpillars during this phase can live up to eight months or as long as five years.
When the caterpillar has reached full size it pupates. Pupation occurs every month from March to November. Pupal duration can be up to 173 days. When the moth is ready to emerge, the pupa wriggles up the shaft helped by 12 abdominal ridges that help it to work its way out of its burrow. The moths once emerged from the pupa live for only 48 hours.

The large grubs were regarded by Maori as good eating and were extracted by pouring water down the entrance hole-forcing the grub to evacuate.

The 4 photos below are of a female Puriri moth, (Aenetus virescens )It is New Zealand's largest moth.
A female moth looks quite different from the all-green or white-spotted green male.  The females have squiggly markings on the bottom of the forewing. These patterns are variable, only the female has them. Females are not often seen.

Female with a  wingspan of 16 cm 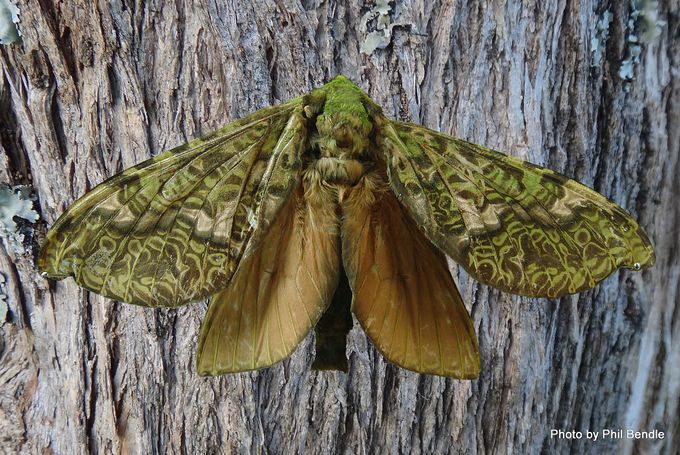 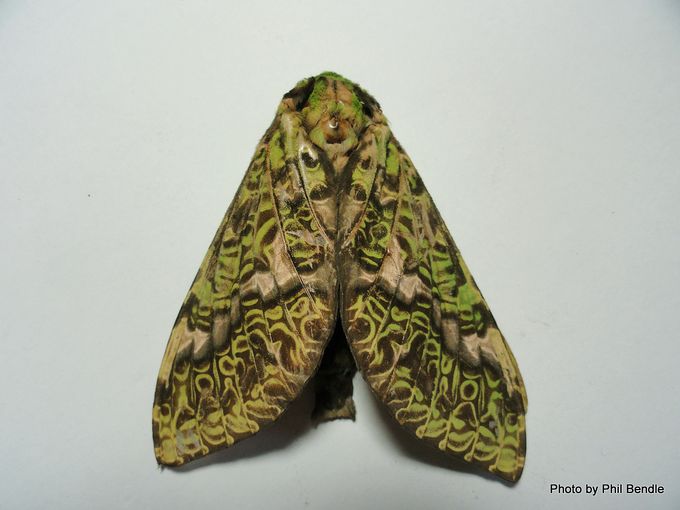 The distinctive camouflage colouring of a female moths wing 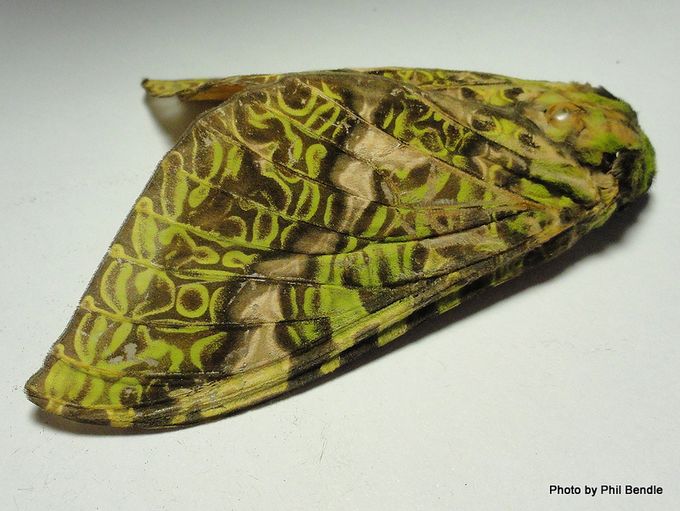 A male Puriri moth, Aenetus virescens is the most common of this species that is seen.  The males are all-green or white-spotted green. Males do not have the squiggly markings on the bottom of the forewings like the female moth. 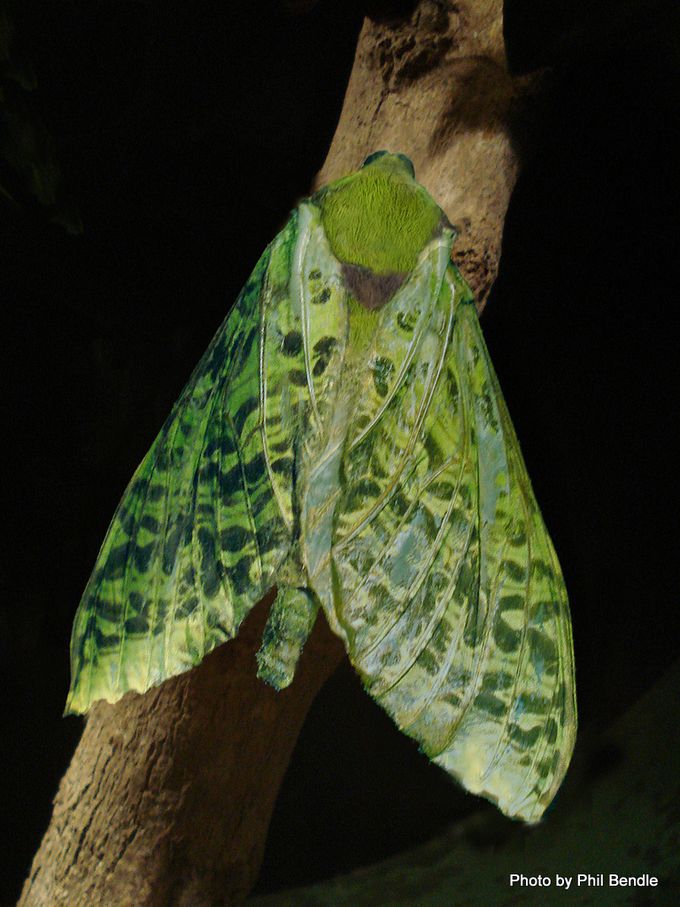 An old puriri moth (Aenetus virescens) burrow in a puriri tree trunk...The trunk below has lost its bark, revealing a pepperpot of burrow entrances and feeding scar. 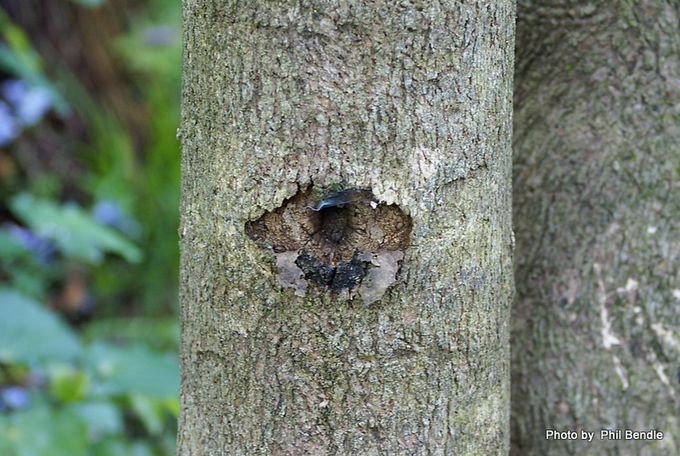 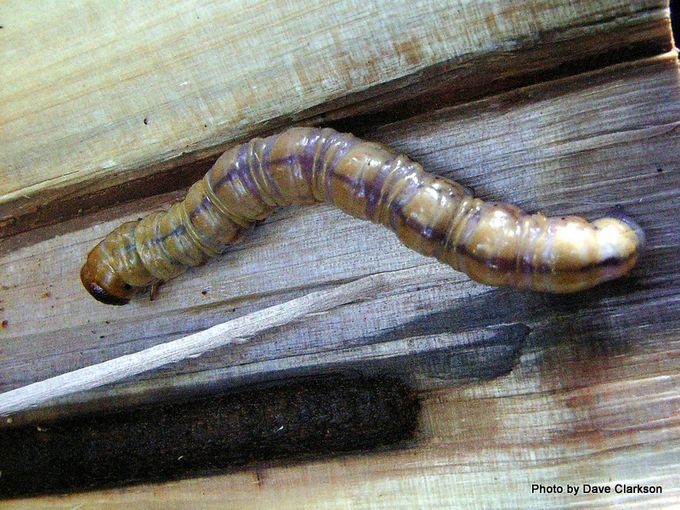 The damage that is done by the bugs of puriri moths on a piece of puriri timber. 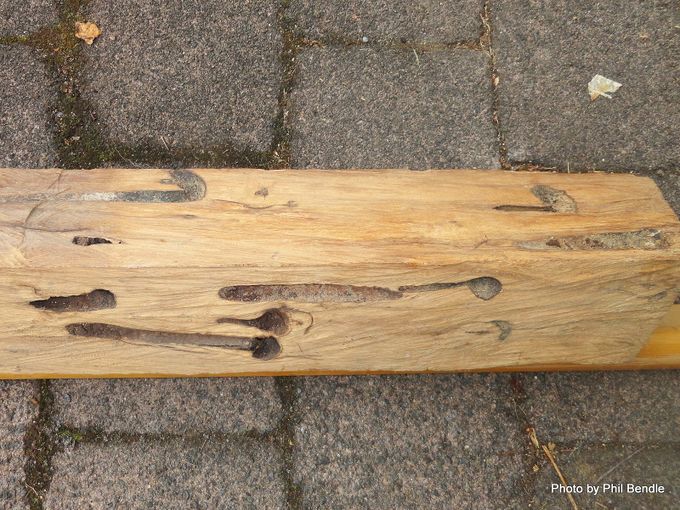 The distinctive '7'  shape of the burrow. 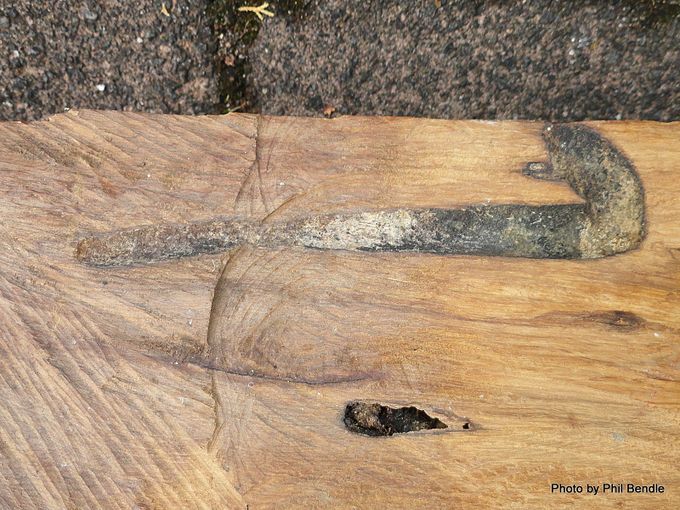