This plant is poisonous. The toxic principles acts prominently upon the liver and portal system, causing congestion, and giving rise, secondarily, in the colon, rectum, and anus, to catarrhal inflammation. The haemorrhoidal vessels become intensely congested, resulting in haemorrhoids in their most aggravated form. The chief characteristic is a severe aching pain in the lumbar and sacral regions.
Visit Phil Bendle Collection:Poisonous Plants in New Zealand

Aesculus hippocastanum is a large deciduous tree native to a small area in the Pindus Mountains mixed forests and Balkan mixed forests of South East Europe. It is widely cultivated in streets and parks throughout the temperate world.
A. hippocastanum grows to 36 metres tall, with a domed crown of stout branches. Old trees outer branches often are pendulous with curled-up tips. The bark is usually dark gray/brown and exfoliates in plates on the older branches and the trunk to reveal an orange bark underneath.
The leaves are opposite and palmately compound, with 5-7 leaflets; each leaflet is 13-30 cm long, making the whole leaf up to 60 cm across, with a 7-20 cm petiole. The leaf scars left on twigs after the leaves have fallen have a distinctive horseshoe shape, complete with seven "nails". The flowers are usually white with a small red spot; they are produced in spring in erect panicles 10-30 cm tall with about 20-50 flowers on each panicle. The flower is the symbol of the city of Kiev, capital of Ukraine. Usually only 1-5 fruit develop on each panicle; the shell is a green, spiky capsule containing one (rarely two or three) nut-like seeds called conkers or horse-chestnuts. Each seed is 2-4 cm diameter, glossy nut-brown with a whitish scar at the base.
The nuts, especially those that are young and fresh, are slightly poisonous, containing alkaloid saponins and glucosides. Although not dangerous to touch, they cause sickness when eaten. If consumed by horses, they can cause tremors and lack of coordination.
In Britain and Ireland, the nuts are used for the popular children's game conkers. During the two world wars, horse-chestnuts were used as a source of starch which in turn could be fermented via the Clostridium acetobutylicum method devised by Chaim Weizmann to produce acetone. This acetone was then used as a solvent which aided in the process of ballistite extrusion into cordite, which was then used in military armaments.
In the past, horse-chestnut seeds were used in France and Switzerland for whitening hemp, flax, silk and wool. They contain a soapy juice, fit for washing of linens and stuffs, for milling of caps and stockings, etc., and for fulling of cloth. For this, 20 horse chestnut seeds were sufficient for six litres of water. They were peeled, then rasped or dried, and ground in a malt or other mill. The water must be soft, either rain or river water; hard well water will not work. The nuts are then steeped in cold water, which soon becomes frothy, as with soap, and then turns milky white. The liquid must be stirred well at first, and then, after standing to settle, strained or poured off clear. Linen washed in this liquid, and afterwards rinsed in clear running water, takes on an agreeable light sky blue colour. It takes spots out of both linen and wool, and never damages or injures the cloth.
In Bavaria the chestnut is the typical tree for a beer garden. Originally they were planted for their deep shade which meant that beer cellar owners could cut ice from local rivers and lakes in winter to cool the Märzen Lager beer well into summer. Nowadays guests enjoy the shade to keep their heads cool. 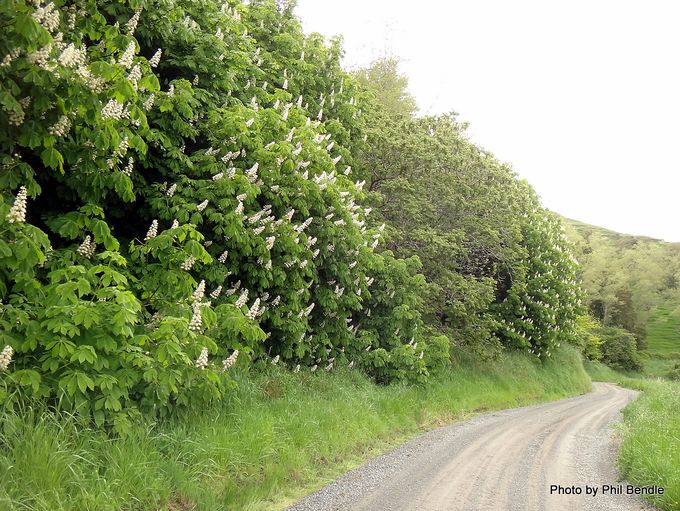 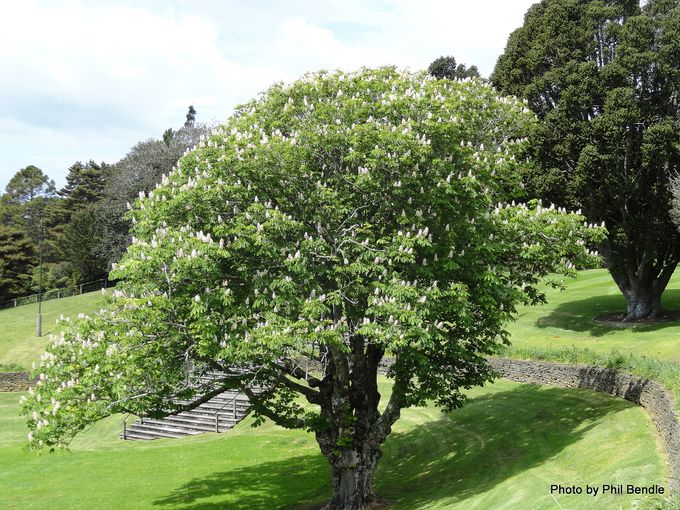 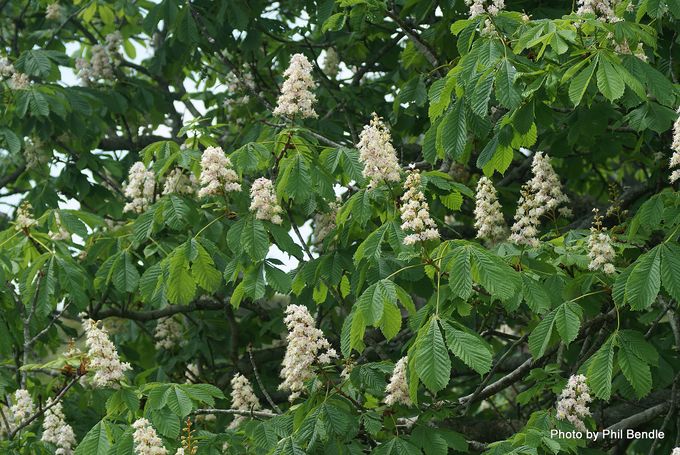 Flowers on an erect panicle. 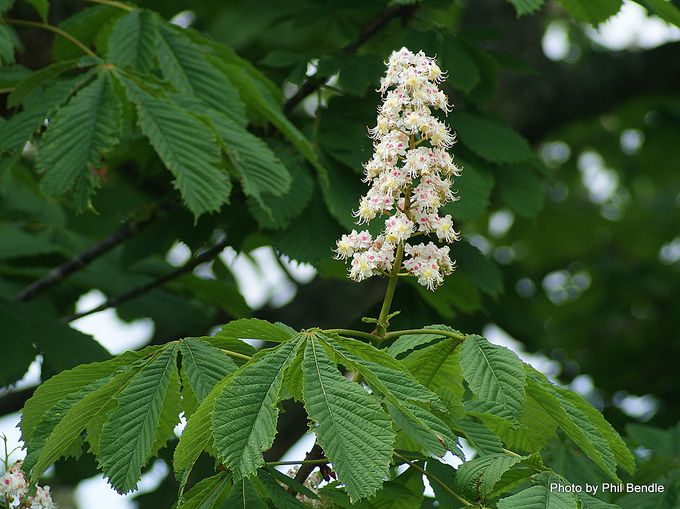 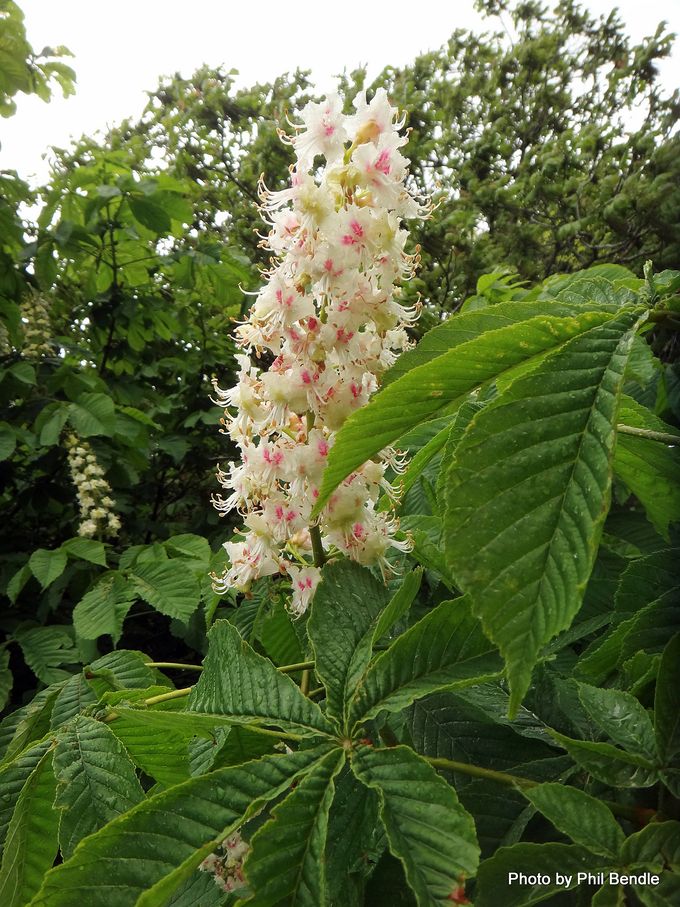 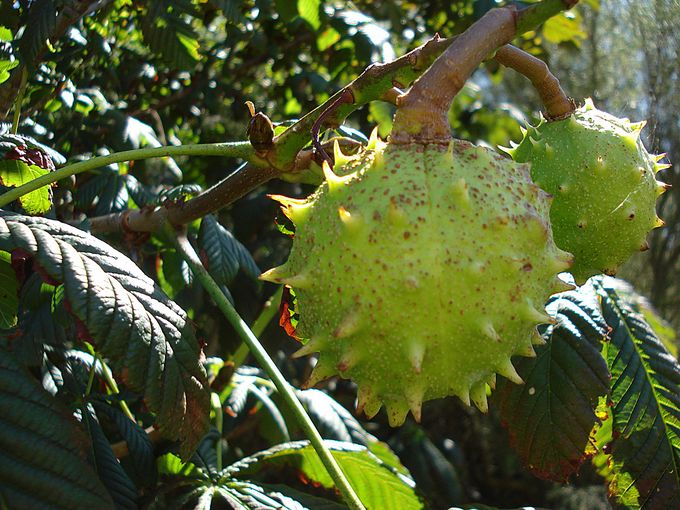 The capsules and conkers (seed) 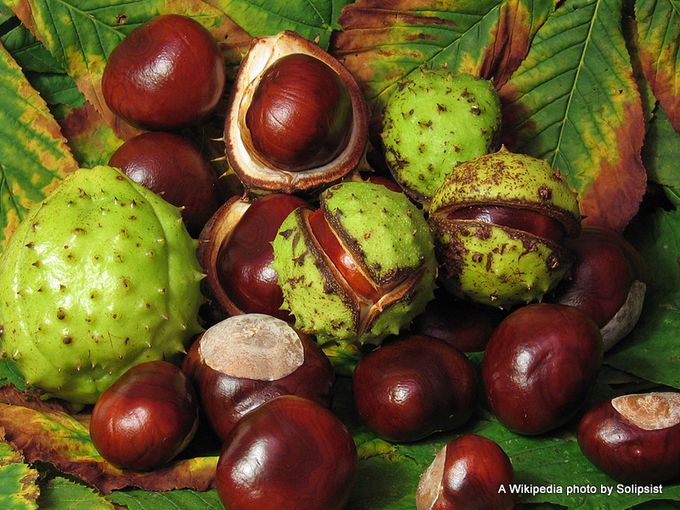