The Thalassarche melanophris (Black-browed mollymawk) is a large seabird of the albatross family Diomedeidae; it is the most widespread and common member of its family. They are circumpolar colonial annual breeders at subantarctic islands including Antipodes Islands, Campbell Island and Snares Western Chain in New Zealand, and at Macquarie Island (Australia), Kerguelen and the Crozet Islands, South Georgia and the Falkland Islands and Ildefonso Islands off southern Chile.
The black-browed albatross is a medium-sized albatross, at 80 to 95 cm long with a 200 to 240 cm wingspan and an average weight of 2.9 to 4.7 kg. It can have a natural lifespan of over 70 years. It has a dark grey saddle and upper wings that contrast with the white rump, and underparts. The underwing is predominantly white with broad, irregular, black margins. It has a dark eyebrow and a yellow-orange bill with a darker reddish-orange tip. Juveniles have dark horn-coloured bills with dark tips, and a grey head and collar. They also have dark underwings. The features that distinguish it from other mollymawks (except the closely related Campbell albatross) are the dark eyestripe which gives it its name, a broad black edging to the white underside of its wings, white head and orange bill, tipped darker orange. The Campbell albatross is very similar but with a pale eye. Immature birds are similar to grey-headed albatrosses but the latter have wholly dark bills and more complete dark head markings.

The black-browed albatross feeds on fish, squid, crustaceans, carrion, and fishery discards. This species has been observed stealing food from other species.

This species normally nests on steep slopes covered with tussock grass and sometimes on cliffs; however, on the Falklands, it nests on flat grassland on the coast. They are an annual breeder laying one egg from between 20 September and 1 November, although the Falklands, Crozet, and Kerguelen breeders lay about three weeks earlier. Incubation is done by both sexes and lasts 68 to 71 days. After hatching, the chicks take 120 to 130 days to fledge. Juveniles will return to the colony after two to three years but only to practice courtship rituals, as they start breeding around the 10th year. (Wikipedia) 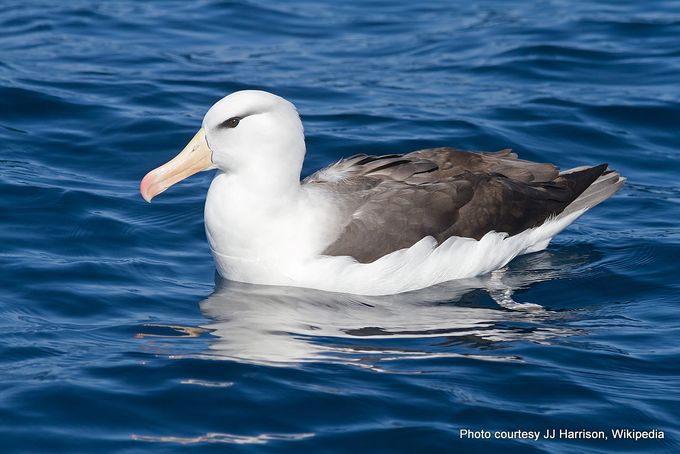 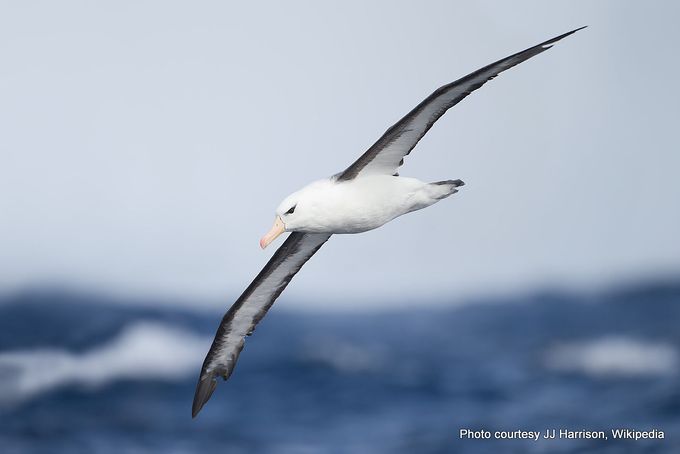