Diomedea sanfordi is a large seabird from the albatross family. It was split from the closely related southern royal albatross as recently as 1998, though not all scientists support that conclusion and consider both of them to be subspecies of the royal albatross.
Albatrosses belong to Diomedeidae family and come from the Procellariiformes order, along with shearwaters, fulmars, storm petrels, and diving petrels. They share certain identifying features. First, they have nasal passages that attach to the upper bill called naricorns. Although the nostrils on the albatross are on the sides of the bill. The bills of Procellariiformes are also unique in that they are split into between seven and nine horny plates. Finally, they produce a stomach oil made up of wax esters and triglycerides that is stored in the proventriculus (narrow glandular first region of a bird's stomach between the crop and the gizzard). This is used against predators as well as an energy rich food source for chicks and for the adults during their long flights.

The northern royal albatross is typically about 115 cm, weighs 6.2 to 8.2 kg and has a wingspan from 270 to 305 cm. The juvenile has a white head, neck, upper mantle, rump, and underparts. There is dark speckling on the crown and rump. Its lower mantle and back are white with blacker speckling than the crown, and it has dark black-brown upper wings with white flecks on its covert. Its tail is white with a black-brown tip, as are its underwings. There is a black band behind the leading edge of its wings between the carpal joint and the tip. As they age, its head, back, rump, tail, and scapular region whiten. All ages have a pink bill with a black cutting edge on the upper mandible, along with pale pink legs. The northern royal albatross can be distinguished from the southern albatross at sea by its upper wings, the plumage of which are all dark compared to the large areas of white on the southern. The two species also differ in behaviour.
The northern royal albatross feeds on fish, cephalopods, crustaceans, salps, and carrion. Squid is an important part of their diet and can make up 85% of it.
They will perform a very extensive mutual or group display, sometimes in the air or on the water. Once they form a bond, the displays lose extravagance. Breeding starts at eight years. They nest biennially and will build their nests on flat summits of the islands that they frequent. They prefer to be in grass or herbs, and their nest is a low mound of vegetation, mud, and feathers. A single egg is laid, in October or November, which takes both parents around 80 days to incubate. The chick is brooded for a month and is ready to fledge after around 240 days. Their colonies are denser than those of any other great albatross.
Northern royal albatrosses nest on the Chatham Islands (Forty-fours Island, Big Sister Island, and Little Sister Island), Enderby Island in the Auckland Islands, and at Taiaroa Head on the Otago Peninsula of New Zealand. The Taiaroa Head colony is the only albatross colony found on a human-inhabited mainland in the Southern hemisphere. When they are not breeding, northern royal albatrosses undertake circumpolar flights in the southern oceans, and in particular like the Humboldt Current and the Patagonian Shelf.

Northern royal albatrosses are listed as an endangered species by the IUCN,[1] and they have an occurrence range of 64,300,000 km2 (24,800,000 sq mi), with a breeding range of 8 km2. 6,500 to 7,000 pairs breed on the Chatham Islands annually along with 60 pairs at Taiaroa Head, for an estimated total of 20,000 birds, although this is a 2012 estimate. In 1985 their main breeding grounds on the Chatham Islands have been badly damaged by a series of intense storms and the resulting lack of nesting material has lowered their breeding success. Chicks and eggs of birds breeding on the South Island have also been preyed upon by introduced species, such as cats, bottle flies, and stoats. Finally, longline fishing is the biggest threat to this bird, even though it has been reduced.
To help in the survival of this species, bird banding is underway, Taiaroa Head has predator control in effect during the breeding season, and there are no predators on the Chatham Islands. Enderby Island and Taiaroa Head are nature preserves, and the Department of Conservation had eradicated feral cattle, rabbits and mice from Enderby Island by 1993. ( Text from Wikipedia) 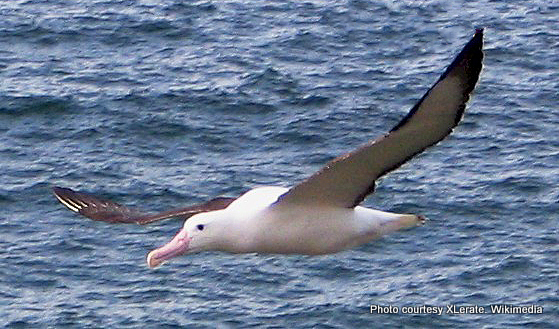 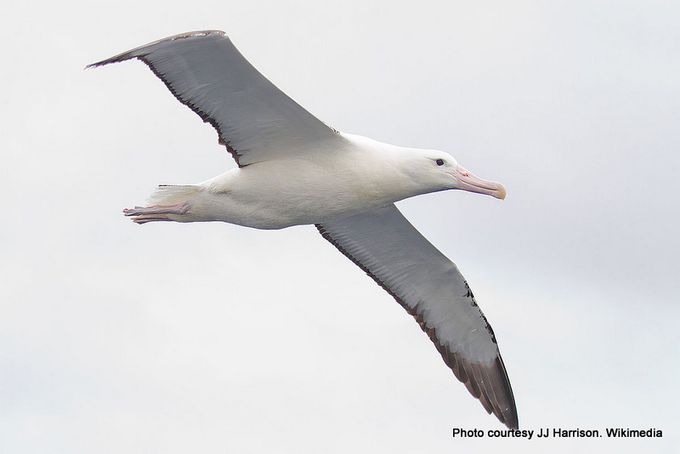