The Southern royal albatross (Diomedea epomophora) is a large seabird from the albatross family. With an average wingspan of above 3 m, it is one of the two largest species of albatross, the other is Diomedea exulans the Wandering albatross. They range along the southern oceans concentrating on the west and east coast of southern South America, and also in the waters surrounding New Zealand.

Diomedea epomophora has a length of 112 to 123 cm and a mean weight of 8.5 kg. The juveniles have a white head, neck, upper mantle, rump, and underparts. There are black speckles on the mantle, and they have dark brown or black wings with white flecks on coverts. Their tail is white except for the black tip as is the under-wing. Young birds soon lose the black on their tail and backs. White appears on the upper wing gradually, as speckles starting from the leading edge. All ages have a pink bill with black on the cutting edge of the upper mandible, and the legs are flesh. Young birds with all dark upper wings can be hard to differentiate from the northern royal albatross. There are clear but subtle differences compared to the wandering albatross, with the southern having a clean black and white appearance, lacking the peach neck spot often found on the wandering albatross. Most wandering albatrosses have dark feathers in the tail and crown and the white in this species expands from the middle of the wing, in larger blotches. The bill colour is also slightly paler, as well as the dark cutting edge along the middle. The average lifespan is 58 years.

The majority of the world's population of southern royal albatrosses nest on the rat free Subantarctic Campbell Island, around 8,200 to 8,600 pairs. There are smaller colonies on Adams Island and Auckland Island in the Auckland Islands, 20 pairs combined, and 69 pairs on Enderby Island. They prefer to nest on tussock grassland, plateaus, or ridges and will lay one egg biennially. This will normally take place in November or December. Both parents will incubate the egg, and rear the young. There are very low mortality rates of the laid eggs once the parents settle in. When feeding the young they will range south to the Campbell Plateau and north to the Chatham Rise. They eat squid and fish, with smaller amounts of carrion, crustaceans, and salps. Its foraging activities normally take place within a 1250 km radius of their breeding site. (Text thanks to Wikipedia). 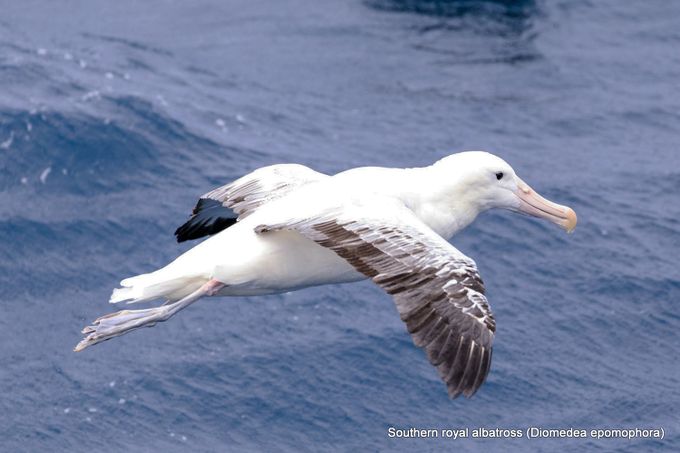