Diomedea exulans (Wandering albatross) is one of the largest members of the genus Diomedea and is one of the largest birds and most studied birds in the world. It is only surpassed by the southern royal albatross for size. They have the largest recorded wingspan of any bird, reaching up to 3.5 metres across.
They have tubular nostrils on either side of their upper hooked pink bill.
There is a salt gland which is situated above the nasal passage which helps desalinate their bodies, due to the high amount of ocean water that they imbibe. It is excreted as a high saline solution from their nose.
The body and wing colours vary. Their legs and web feet are flesh-coloured.
They feed on squid and marine fishes usually by surface-seizing but they can dive a few a few metres below the surface.
D. exulans spend most of their life in flight, landing only to breed and feed. They travel vast distances, one banded bird was recorded travelling 6000 km in twelve days.
They breed on South Georgia Islands (southern Atlantic Ocean), Prince Edward Island, Marion Island, Crozet Islands, Kerguelen Islands (southern Indian Ocean). Only a few pairs breed on Macquarie Island (New Zealand territory).
In New Zealand, they are normally found wandering offshore in southern waters and northwards to Cook Strait, and in lower numbers further north.
Their threats at sea are interactions with fishing vessels hooks and gear.

Call of the Wandering albatross


Photographs are of a display at the Southland Museum, 108 Gala Street, Invercargill. 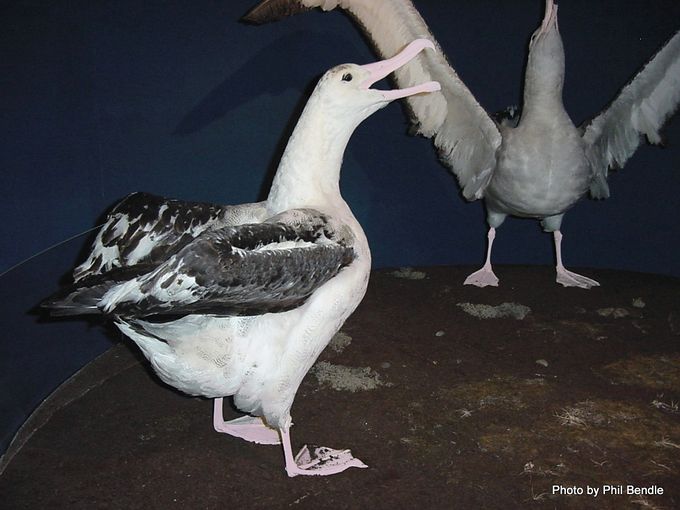 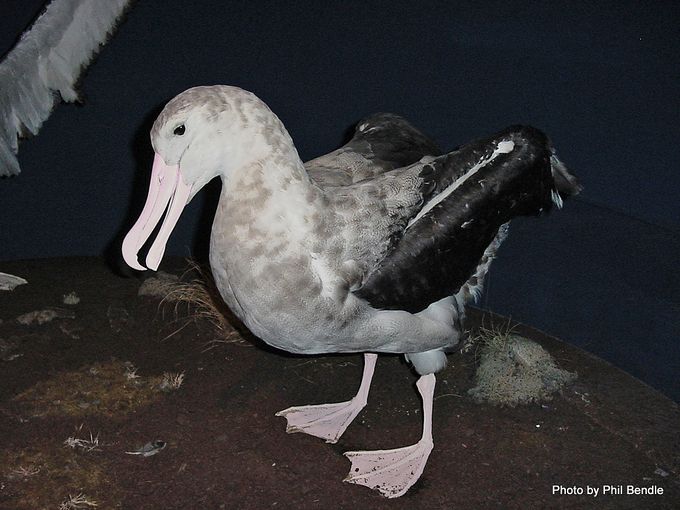