Apis mellifera, the most commonly domesticated species, was the third insect to have its genome mapped. It seems to have originated in eastern tropical Africa and spread from there to Northern Europe and eastwards into Asia to the Tien Shan range. It is variously called the European, Western or Common honey bee in different parts of the world.
Early settlers realised that without native long-tongued (pollinating) bees, the fruit trees and crops they had brought from Europe would not become established.
The first recorded importation of Apis mellifera (Honeybee) was on the 13th March 1839 by a Mary Bumby, the sister of the missionary John Bumby. She brought to the Hokianga two bee colonies in traditional straw skeps. Skeps are essential upside down baskets, which were used to house bee colonies many years ago. The first recorded importation of bees to the South Island was by Captain Arthur Wakefield of the new Nelson settlement in 18th April 1842. 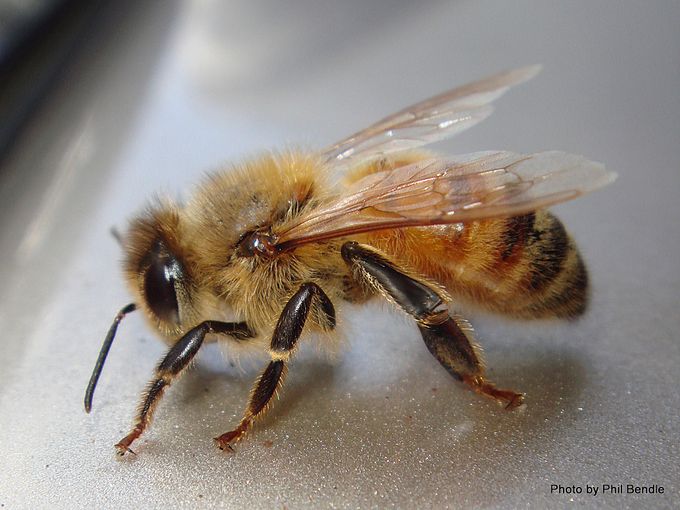 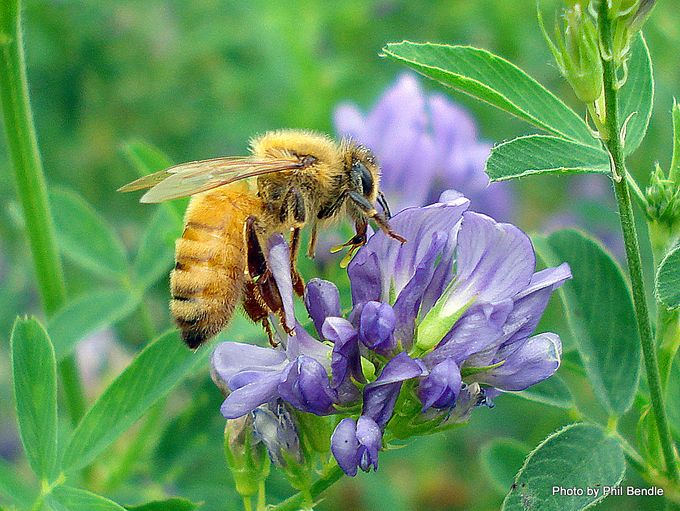 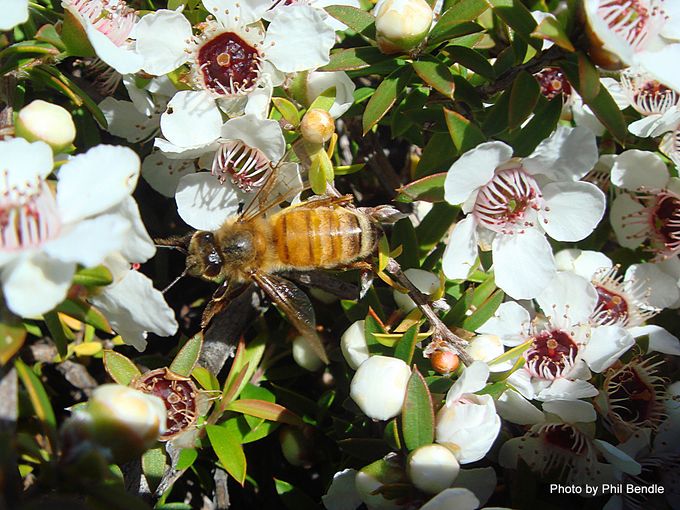 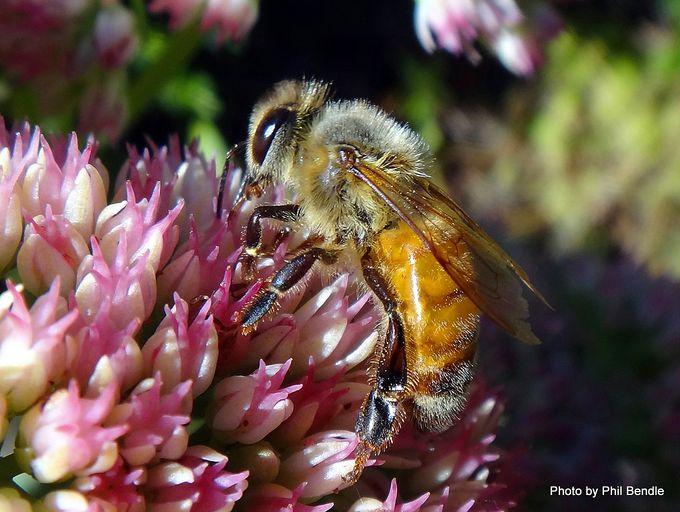 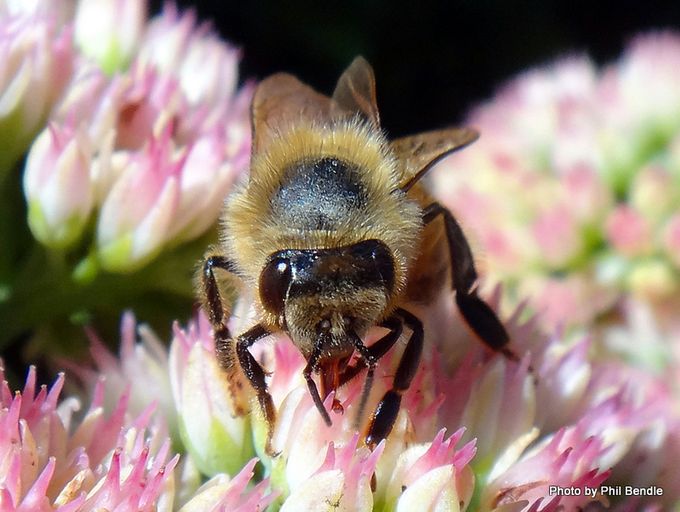 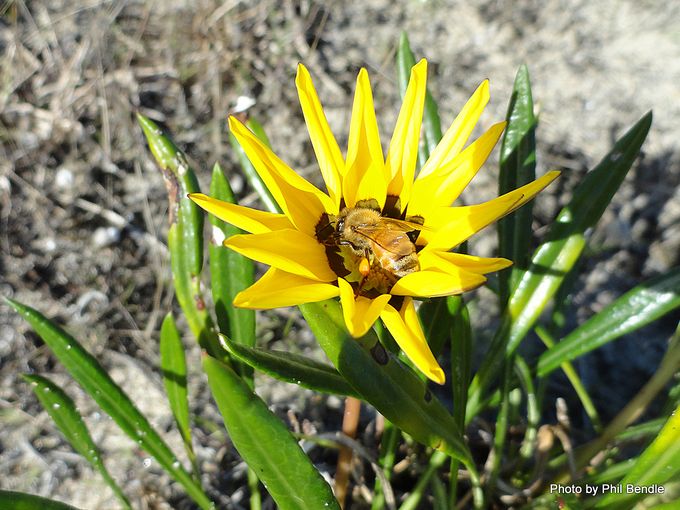 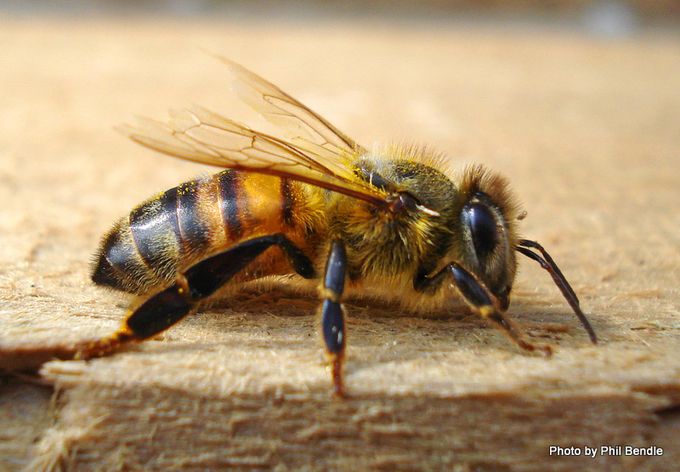 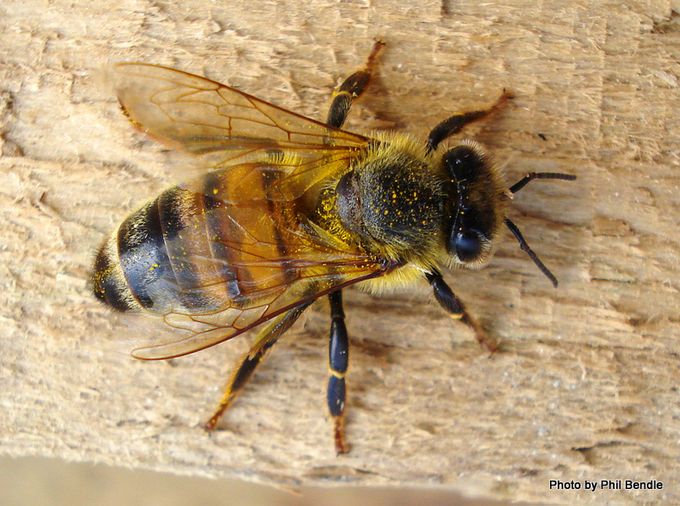 The underside of a bee 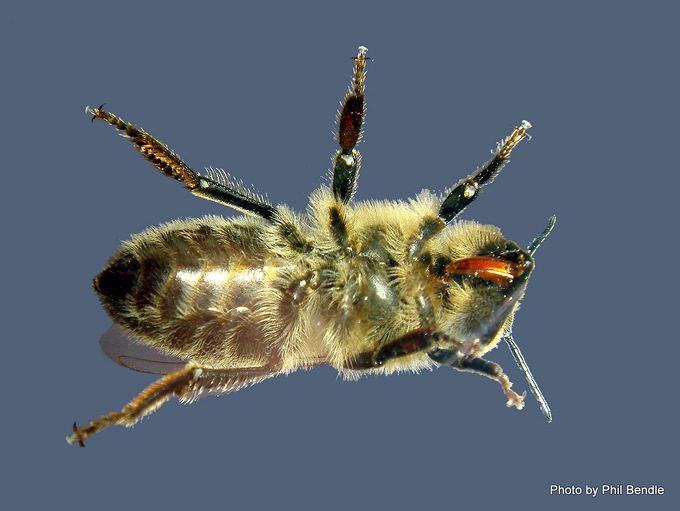 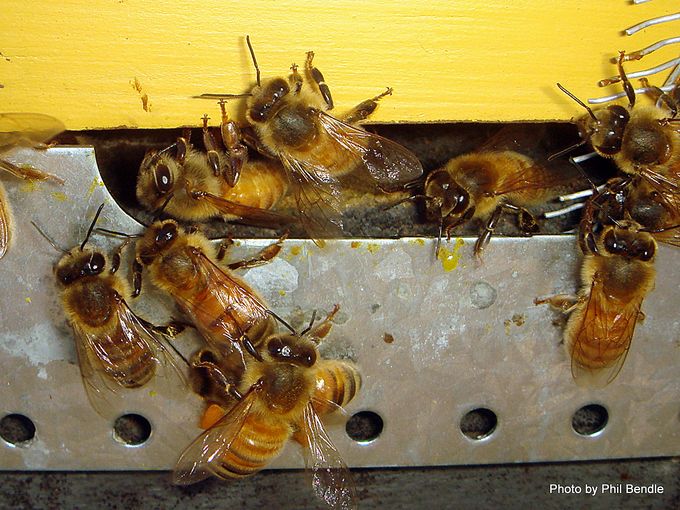 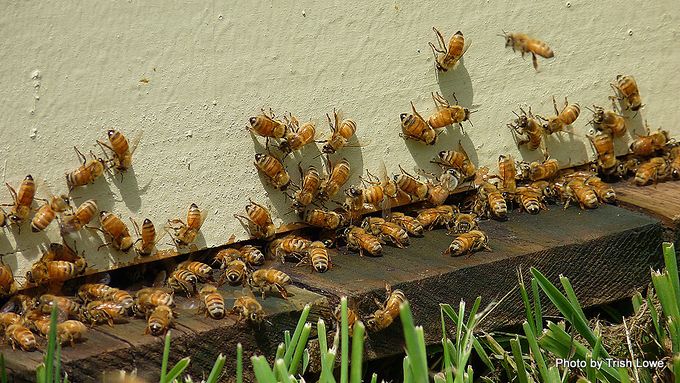 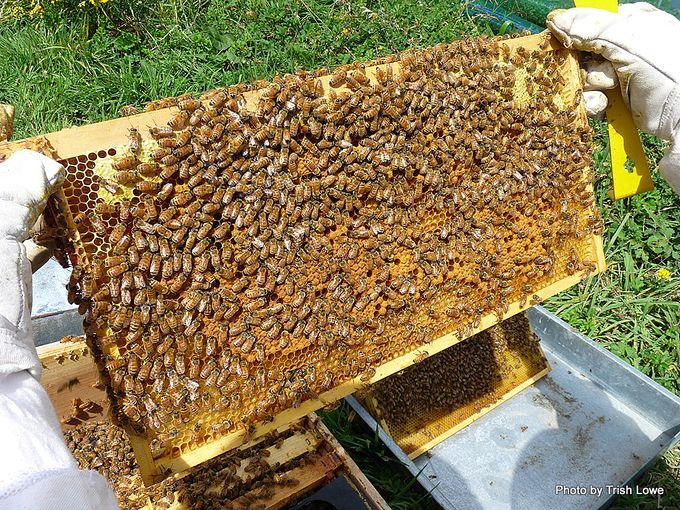 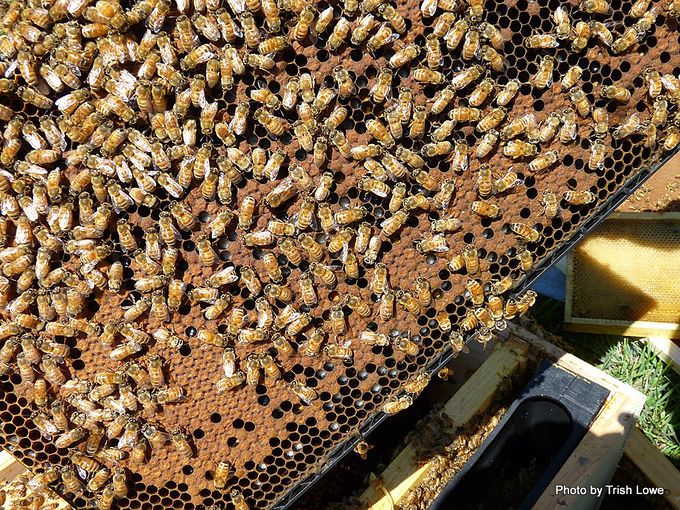 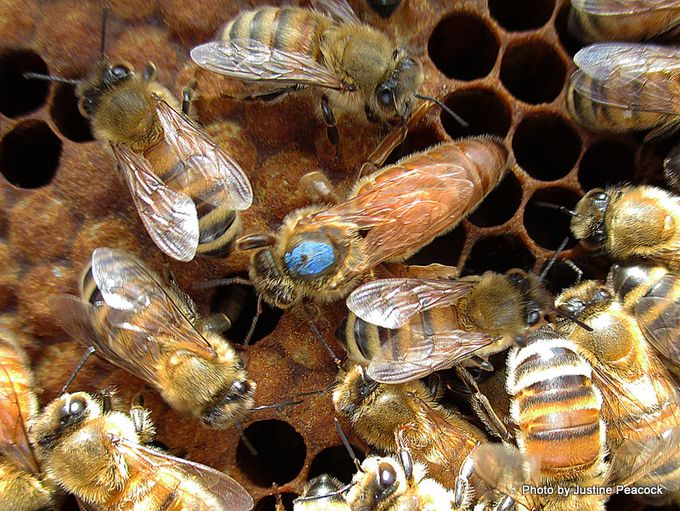 The sealed brooding chambers
The brood chamber houses worker-made cells where the eggs, larvae and pupae develop. Some of the cells in this part of the hive also hold pollen, nectar or honey that's used to feed the developing larvae. 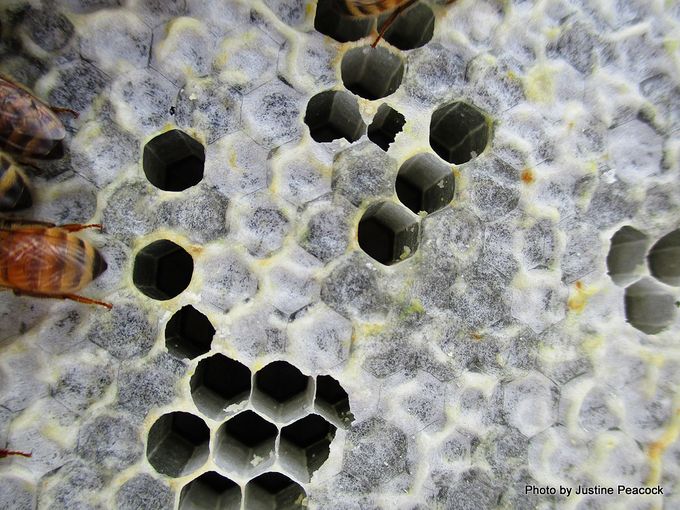 Queen cells are very different from the normal cell. They are elongated and have a rough textured. They are about 2.5 cm in length and they hang vertically off the frames. When unfinished they are called queen cups. After an egg is laid in a cup, the cell is enlarged into a “peanut” shape by the workers.
If queen cell hanging somewhere in the middle of the frame is usually a supersedure (emergency queen cell). A cell hanging from the bottom of a frame is usually a swarm cell which is constructed in preparation for swarming and are not intended to replace the hives ageing queen. 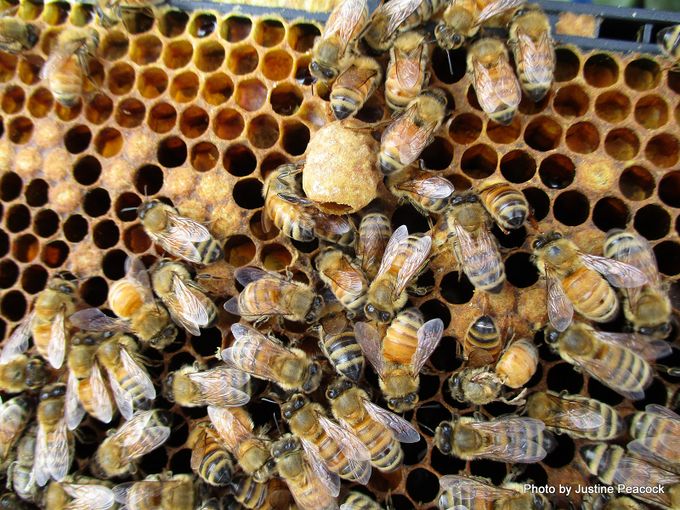 Swarming is the natural means of reproduction of honey bee colonies. A new honey bee colony is formed when the old queen bee leaves the colony with a large number of bees. This is after she has laid an egg that will grow into another queen to replace her. 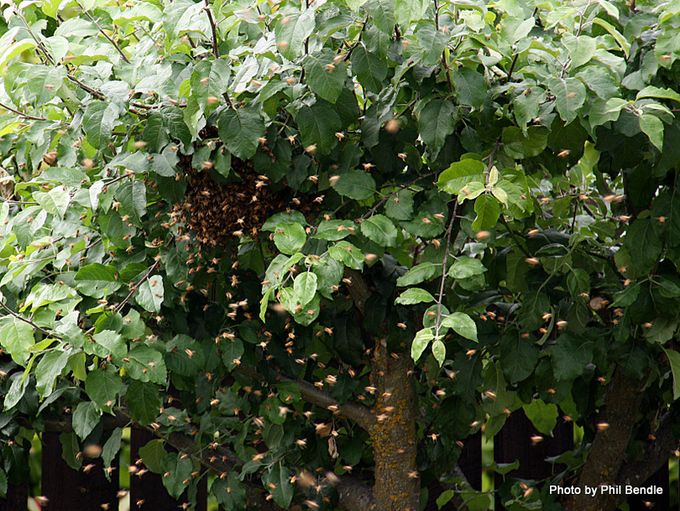 The worker bees will then fly to a location and get into a big clump surrounding the Queen. In the meantime, scout bees have left and are flying around looking for a good spot to build a new hive. 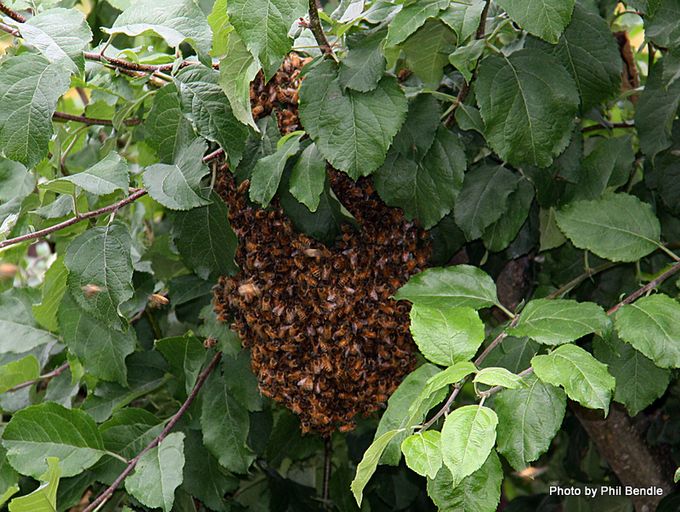 Varroa destructor is an external parasitic mite that attacks honey bees.
Photo below shows a Varroa mite on the abdomen of an adult bee.
For more details on this mite visit: http://www.terrain.net.nz/friends-of-te-henui-group/spiders/mite-varroa-mite-varroa-destructor.html 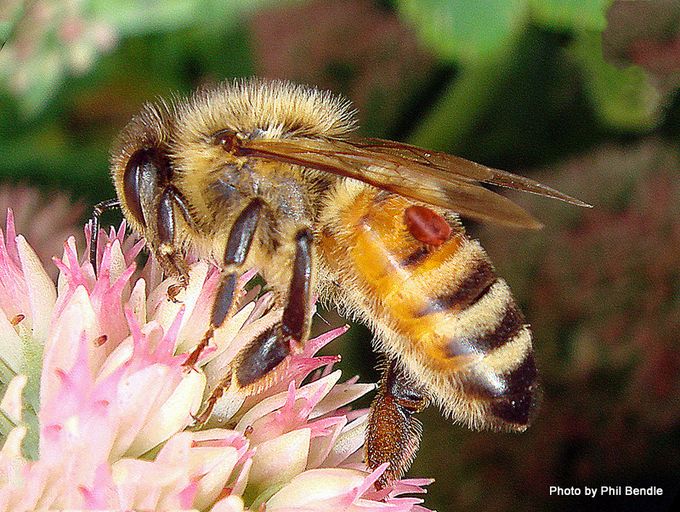