Megachile rotundata is a European bee that is a member of the Leafcutter and Resin Bees. It is the smallest of the leaf-cutting bees, ranging in size from 6 to 19 mm and is partially bivoltine (two generations a year. They are dark grey in colour and demonstrate sexual dimorphism. Females have a white scopa (pollen-carrying apparatus), elongated hairs for carrying pollen, on the underside of the abdomen, and shorter white hairs on the rest of their body. Males tend to have a pair of creamy white to yellow spots near the end of the abdomen.

Megachile rotundata has been introduced to various regions around the world including New Zealand. As a solitary bee species, it does not build colonies or store honey but is a very efficient pollinator of alfalfa, carrots, other vegetables and some fruits. Because of this, farmers often use M. rotundata as a pollination aid by distributing M. rotundata prepupae around their crops. Each female will construct and provision her own nest, which is built in old trees or log tunnels. Being a leafcutter bee, these nests are lined with cut leaves. These bees feed on pollen and nectar and display sexual dimorphism. This species has been known to bite and sting, however, it poses no overall danger unless it is threatened or harmed and its sting has been described as half as painful as a honey bee.

Below is an article by Barry Donovan who introduced Megachile rotundata to New Zealand.
“The lucerne leafcutting bee Megachile rotundata was introduced to New Zealand from North America by me beginning in 1971 for management as a specialist pollinator of lucerne flowers for production of seed. A specialist pollinating bee was needed because although honey bees readily visit lucerne flowers, they collect mainly nectar and avoid `tripping’ a spring-loaded reproductive column which can deliver a debilitating punch to the soft-bodied bees. Consequently, the flowers are not pollinated. The short-tongued bumble bee Bombus terrestris which has a more resistant body will readily trip the flowers, but there are rarely sufficient bumble bees to pollinate most of the flowers. Female lucerne leafcutting bees are more strongly built than honey bees and will trip more than 10 flowers a minute as they collect pollen (and nectar) for their larvae.

Lucerne leafcutting bees were imported as overwintering prepupae (the mature larval form in cells), and adult bees were hatched in quarantine so all foreign insect enemies could be removed. Consequently, our bees are free of all the pests that reduce their numbers in other parts of the world. However, and unfortunately for us, one native parasitic insect which normally attacks tube-nesting mason wasps and sometimes tube-nesting native bees will also attack leafcutting bees, but it can be controlled by storing the bee nests in a fridge right after nesting ceases by about early April, until placement back in the field by about early November.

The introduced leafcutting bees thrived through the 1980s and where we had sufficient numbers on flowering lucerne, large increases in seed yield resulted. However the disestablishment of the old Department of Scientific and Industrial Research in mid-1992 caused the collapse of our project, and without scientific and management support the leafcutting bee population collapsed. Additionally, grapes for wine began to take over former lucerne seed crops, and seed began to be imported, so the demand for pollinating bees fell.

Several years ago interest in leafcutting bees (and other species of bees) began increasing again because of the threats facing honey bees, and so efforts are being made to increase the numbers of leafcutting bees for wide distribution. Leafcutting bees can be valuable pollinators of a range of flowers, and because the females are not aggressive and the bees can be easily managed, they can be readily utilized by home gardeners and owners of small holdings for interest and fun.”

The Scopa is a brush of hairs that bees use to carry pollen. They are usually found on the hind legs of bees but the Megachilidae are unique in that they store pollen on the underside of their bodies. See photo below. 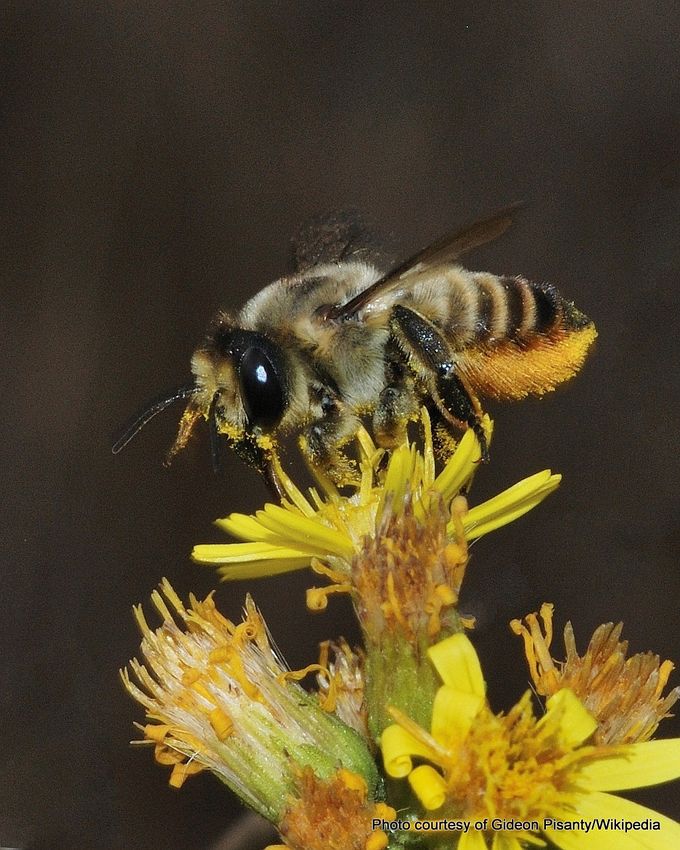 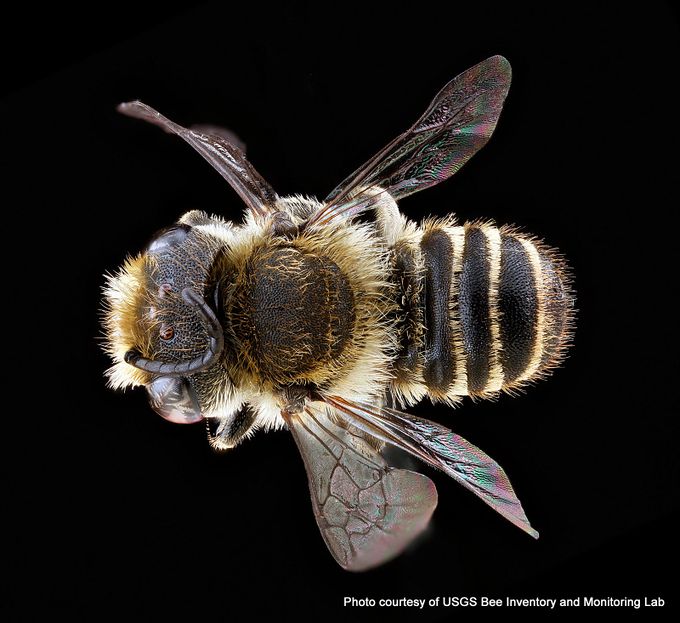 A female cutting leaves for her nest. 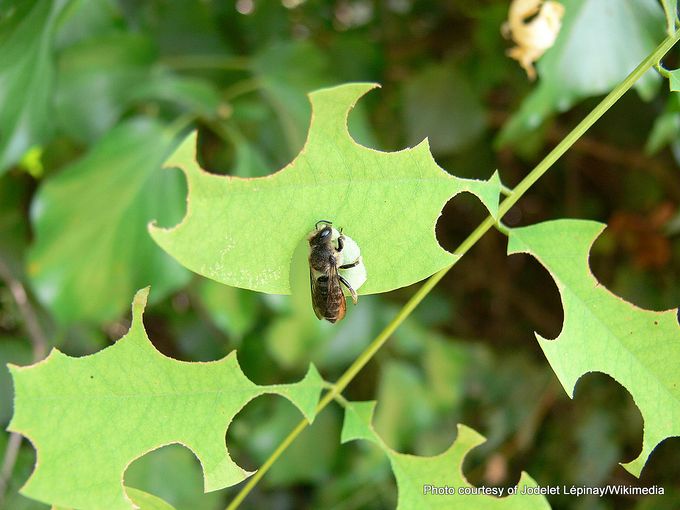