The mountain ringlet butterfly is a member of a special sort of rock group. It’s one of a few small animals and plants that have adapted to the high life in New Zealand, making their homes among the shifting rubble of mountain scree slopes. Here they have to endure cold, drought, wind, rock falls, and burial for long periods of snow and ice.The endemic Percnodaimon merula (Percnodaimon pluto) are found throughout the mountain ranges of the South Island – from 800 to 2500 metres high. You’ll usually see the butterflies only between November and March, during the short alpine summer and then usually only during sunny weather.

The pluto part of the mountain ringlet’s original scientific name recalls the Greek god of the underworld and signifies its adult colour, dark-brown to black. This colour helps the butterfly to use its wings as a solar panel, an important strategy for living in an alpine environment.

It has other strategies that enable it to survive in this harsh climate. For example, the female lays her eggs on the top of stones, not directly onto the caterpillar’s food supply. The mountain ringlet is unique among New Zealand butterflies in this, but a few other species in the Himalayas and the European Alps do the same. The benefit for the eggs is that rocks are better incubators than plants – they heat up more, and retain their heat longer. The warmth speeds up the development of the eggs – maximising the growing season.

The eggs are bright blue at first, but soon become mottled with brown spots, and merge into the rocky background. They take about twelve days to hatch. When the little black-headed, spotted caterpillars emerge, they tuck into the only food available – their eggshells. This presumably sustains them for their first great larval mission – the journey in search of their only known food plant, the grass species Poa colensoi. Like other alpine dwellers, this poa grass is tough. It can survive the climate, and it has roots that go deep and wide enough to enable it to hang on tight in the scree. It grows about twenty centimetres high.
The caterpillars climb the grass blades to nibble the tips. But this is at night, not during the day. By day, they hide at the base of the grass plants or among the rocks. The caterpillars aren't heat seekers. Maybe that would just expose them to being picked off by insect-eating passers-by.
What the caterpillars gain in protection by this strategy, they lose in the speed of development. Matching their cold temperature surrounds, mountain ringlet caterpillars go slow and grow slow. They pass through five instars (larval stages) – that is, they moult four times before they become pupae. In the most favourable summer weather, an instar lasts at least a month. When the caterpillar has to overwinter, an instar may last up to eight months. Caterpillars can’t get through all their growing in one summer, so they’re not ready to pupate until at least their second summer.
To pupate, the mountain ringlet has another unusual strategy. It crawls under a suitable stone and hangs itself up, not vertically like most other kinds of insects, but horizontally. This allows the pupa to fit within narrow spaces between stones. But it’s also another example of heat-seeking. The pupa can make the best of the rock’s warmth for its development. The adult emerges from the pupa after two to three weeks.
In full sun, the butterflies are very active and alert. They glide in erratic zigzags about ten to twenty centimetres above the ground, holding their wings open in a wide V, soaring along on the mini-thermals rising off the sun-warmed rocks. They usually avoid flying over plants, though they will occasionally pause to feed on the nectar of mountain flowers.

The mountain ringlet is a remarkable combination of qualities – the delicacy we associate with a butterfly, and the hardiness of a mountaineer. It has shown an amazing capacity to adapt to the extreme climate. This has probably happened in a relatively short time – only about four million years. Before then, there were no mountains here for the mountain ringlets to evolve in.
And even high-living butterflies can’t get away from parasites – at least two species of tiny high-living mites have been found attached to the mountain ringlet’s thorax.
Text originally published in Tai Awatea, Te Papa's on floor multimedia database (1998). 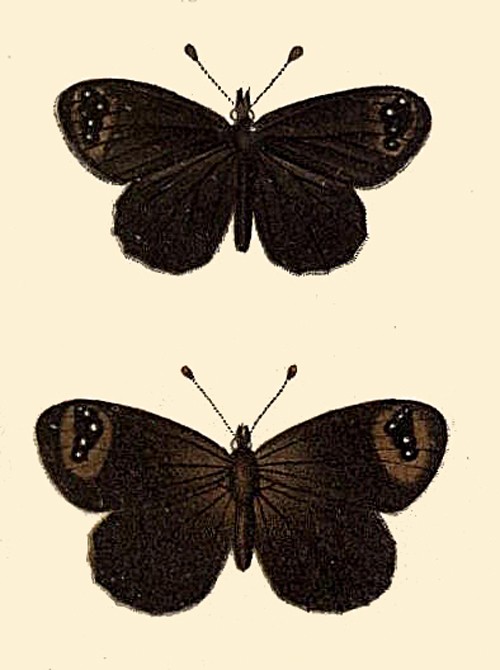