Bombus terrestris, the buff-tailed bumblebee or large earth bumblebee is one of the most numerous bumblebees. The queen is 2–2.7 cm long, while the workers are 1½–2 cm. The latter are characterized by their white-ended abdomens.

The first bumblebees to be seen in spring are the queens – the queen is the only bumblebee to hibernate through the winter. The queen is much bigger than the workers, which appear later. As soon as the queen has found some nectar, to replenish her energy reserves, she starts looking for a suitable site to build her nest.
The nest site is usually underground; an abandoned rat or mouse burrow is often used. Inside, the queen first builds a nectar pot, which will sustain her during bad weather. She also begins to build up a pollen larder, which will feed her brood.
The queen then lays a small batch of eggs. Once these hatches she tends the larvae, feeding them with nectar and pollen. When the larvae are grown they pupate, and about 2 weeks later the first worker bumblebees emerge. These workers will forage for nectar and pollen for the colony and tend later generations of larvae. The queen can now concentrate on egg laying and does not need to leave the nest again. The workers are smaller than the queen, and will only live for a few weeks. The foraging range and frequency of workers depend on the quality and distribution of available forage but most workers forage within a few hundred metres of their nest.
Towards the end of summer, the queen lays some unfertilized eggs which develop into male bees. Some eggs are also laid which receive extra food and pupate to become new queens. When the males emerge from the nest they do not return, foraging only for themselves. They seek out the new queens and mate with them.

B. terrestris is thought to be a mainly singly mating species. This is unusual for social insect queens where mating with several males (polyandry) has been shown to have several benefits. The lack of multiple mating by B. terrestris queens may be caused by male interference in the process.
B. terrestris males plug the female's sexual tract with a sticky secretion during mating which appears to temporarily reduce the female's ability to successfully mate with other males for several days. When the autumn cold weather sets in, all but the young queens will die. The latter seek out a safe place to hibernate they are the only ones to survive the winter. 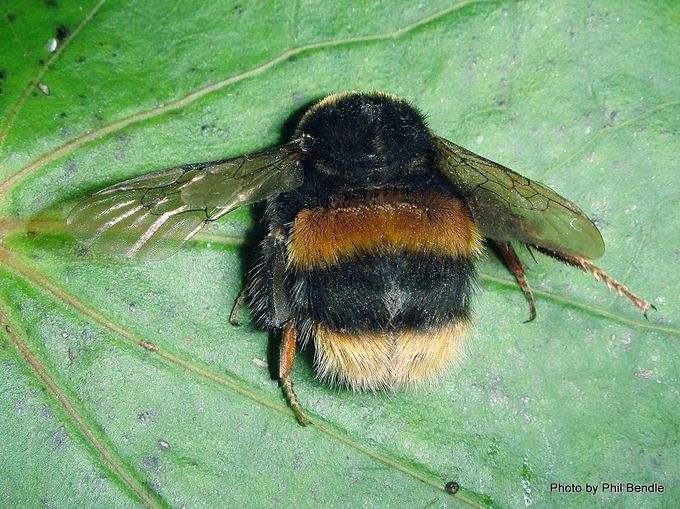 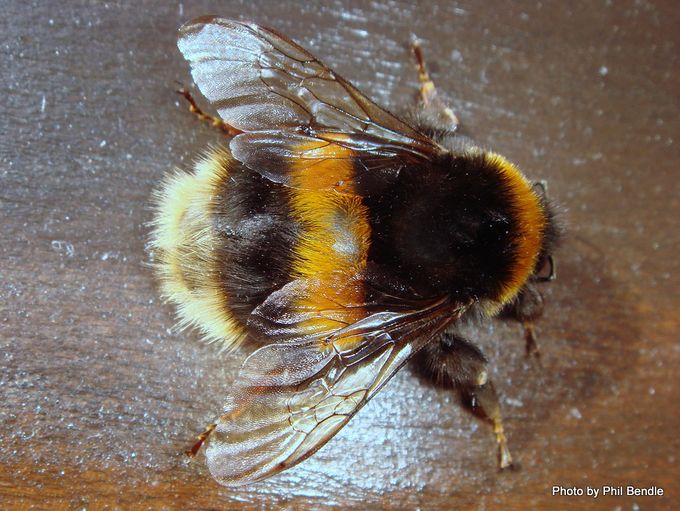 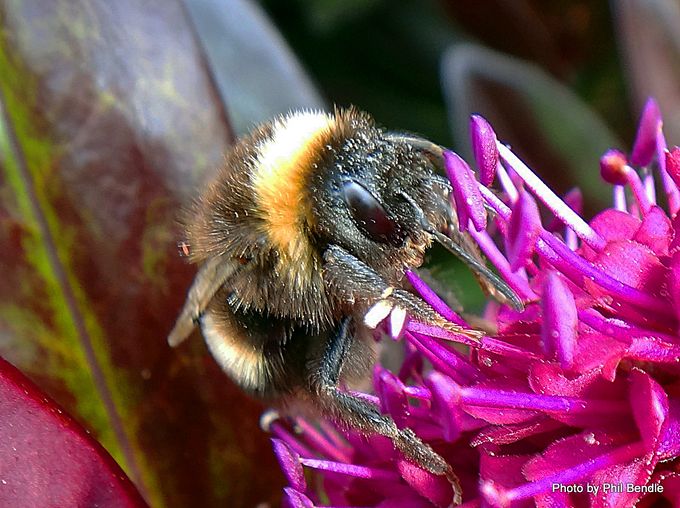 A worker bee emerging from the underground nest. 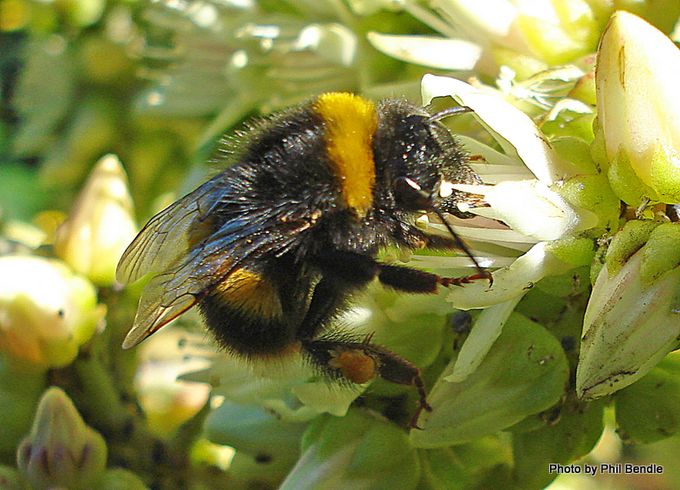 One worker on the left is about to leave and the other is a returning worker with hind legs covered with orange pollen. Bumblebees have something called ‘pollen baskets’ on their legs. This is a large flat space or hollow on their hind legs surrounded by hairs to make the ‘basket.’ The inside of their legs have lots of hairs that make brushes or combs. After they have climbed around a flower and have lots of pollen stuck to them they run the combs over themselves to pick up the pollen. Then they mix it all together with a bit of nectar to make it sticky and pack it into the pollen basket. 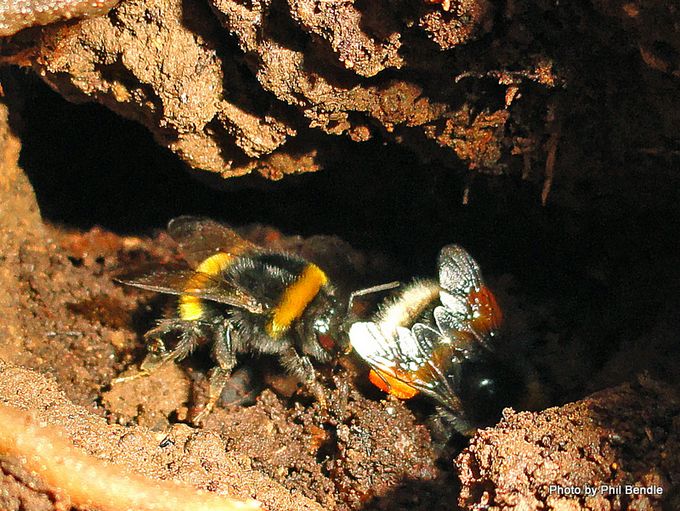 The four photos below are of a queen. 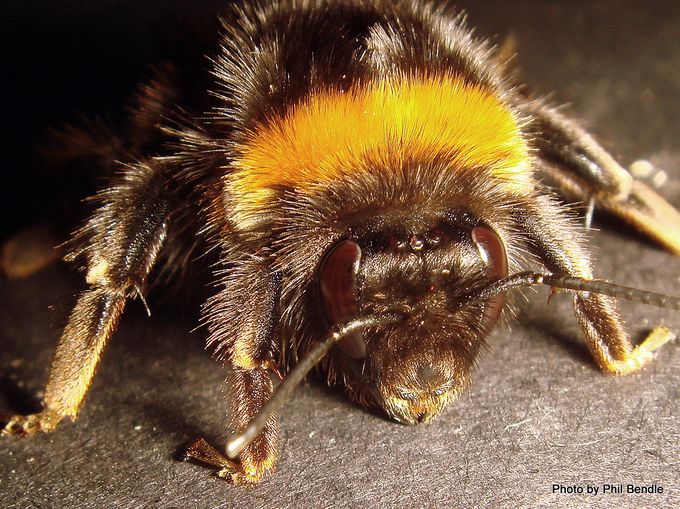 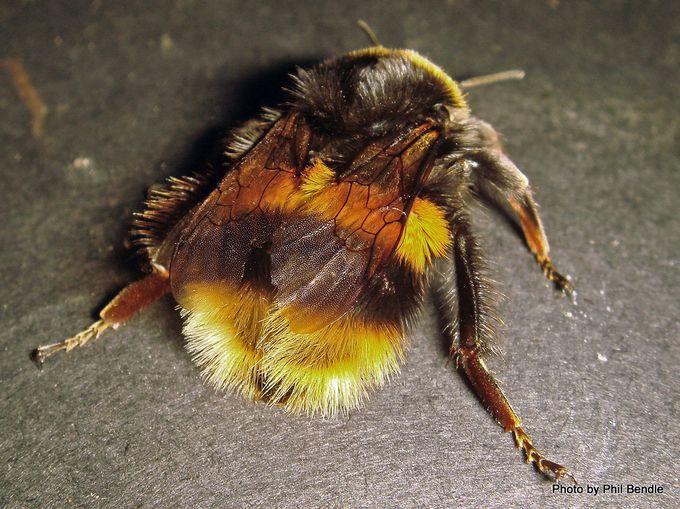