Butler's ringlet (Erebiola butleri) is an elusive New Zealand endemic butterfly, discovered in 1879 by John D Enys at the 'Whicombes' alpine pass at the head of the Rakaia River in Canterbury. It was described as a new species and genus in June 1879 by Richard W.M. Fereday who named it after Mr.A.G.Butler who contributed valuable lists and papers on the Lepidoptera of New Zealand. It is the only member of the genus Erebiola. Globally important butterfly.

Butler’s ringlet is confined to the subalpine zone in the South Island. It has been identified at only a few sites along the main divide of the Southern Alps. It favours subalpine terraces at altitudes 900-1300m in areas of snow-tussock with Hebe and Dracophyllum shrubs. Its preferred locations are often damp, almost boggy, or next to mountain lakes. It is very difficult to find even in areas where it has previously been seen, and so little is known about its actual range. It is a common butterfly if one is in the right place, at the right time. It flies late summer to autumn so most people are not at alpine levels at that time of the year so it is not reported very often. It is known to be able to remain aloft for long periods of time and to cover great distances.

Butler’s ringlet has a wingspan of 35-43mm, with a 40mm average for males and a 37mm average for females.
Both males and females are smoky brown, though males tend towards the richer browns while the females tend towards the paler browns. The underside of the hindwing has wedge-shaped silvery-white marks. Both the underside and the topside of the wings have eyespots at the distal-most ends, surrounded by reddish-brown shading. There is variation between individuals in the number of eyespots, the extent of the reddish-brown colouring around the eye spots, and the silvery-white markings on the undersides of the hindwings.

An egg is an ivory colour with vertical ribbing. It is laid singularly on a nearby shrub and hatches after 14 days. The larva is a yellow-brown with dark and light lateral striping. A fully grown larva is roughly 20mm long. The pupa is grey and cream with fine black spotting along the abdomen, changing to a brown on the rest of the body.
The larva grows from 3mm to 20mm over an unknown length of time, before pupating. Pupation lasts about 21 days. It is unknown how long adult butleri live for.

Butler's ringlet is visually similar to the Black mountain ringlet (Percnodaimon merula). The two species may be differentiated by where the individual in question is sighted. Butler’s ringlet prefers to fly over vegetation, settling among snow-tussock, subalpine shrubs and herbaceous flowers, whereas the Black mountain ringlet tends to congregate over rock and scree. (Wikipedia). 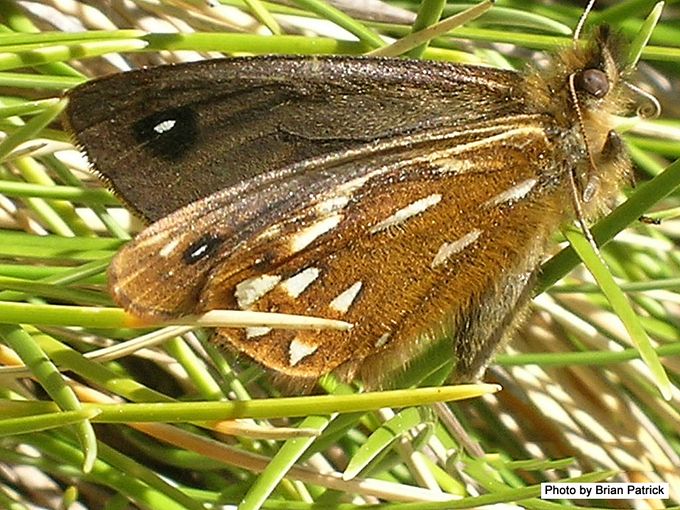