Sidymella longipes are a medium-sized, brownish, square-ended crab spider with long legs. It is native to Australia and is now common in modified habitats in the upper North Island of New Zealand. They are usually found on leaves and twigs in gardens. The species-specific epithet ‘longipes’ means long legs.
The females are 9mm to 15 mm in body length, with the male a little smaller. It has a comparatively smooth-looking, trapezium-shaped body, not like the rounded abdomens that are typical of the majority of spiders.
The spider has pale, semi-transparent legs. The first two pairs of legs are the longest and are armed with strong spines. When the spider is at rest the first two pairs of legs are pointed forward in a parallel position. This resting position on a twig makes it had to be seen. It is not known to be aggressive and may be too small to cause serious illness in humans. 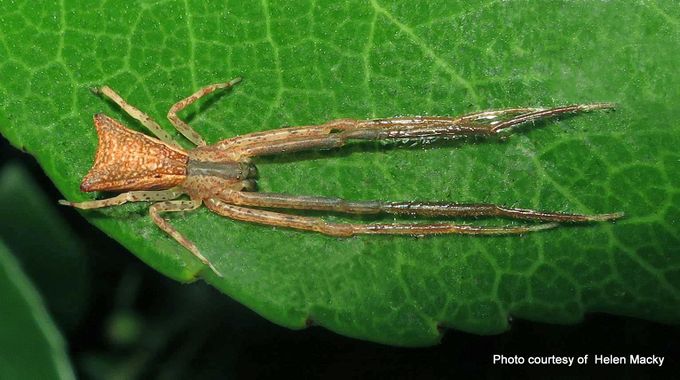