The spider genus Steatoda includes over 120 recognized species, distributed around the world. Many spiders of the genus Steatoda are often mistaken for widow spiders (Latrodectus), and hence the common name. Steatoda are significantly less harmful to humans than the widow spiders (Latrodectus). Most Steatoda are shaped similarly to widow spiders, with round, bulbous abdomens and many of them have distinct colouring and are significantly smaller than Latrodectus specimens.
Steatoda spiders construct tangle webs. They have very poor eyesight and depend mostly on vibrations reaching them through their webs to orient themselves to prey or to warn them of larger animals that could injure or kill them. They are not aggressive, and most injuries to humans are due to defensive bites delivered when a spider gets unintentionally squeezed or pinched. The bites of some members of this genus are medically significant in humans (such as Steatoda grossa and Steatoda nobilis), however, bites by Steatoda species generally do not have any long-lasting effects. Symptoms may last for a couple of days but the total effect is unlikely to be more serious than that. However, if symptoms were to persist it would be advisable to seek medical attention immediately. 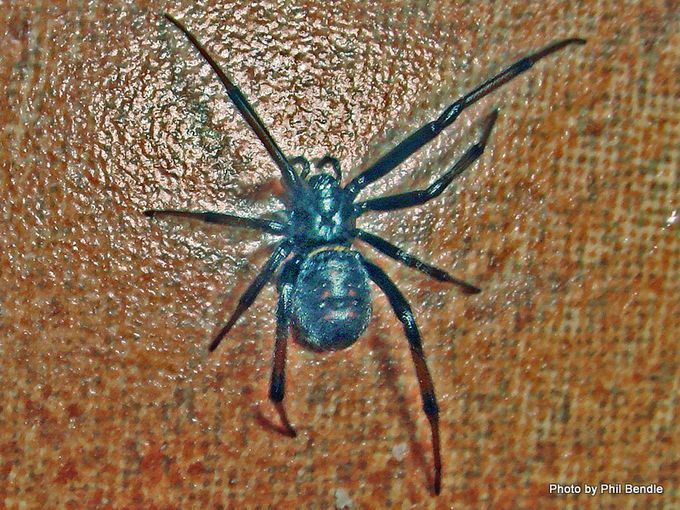