Woodworthia sp. 'Southern Alps' is a small, robust, largely nocturnal gecko that sun-basks at the entrance to their retreat. Its habitats are scree, outcrops, talus slopes and creviced bluffs (mostly among greywacke rock) and associated scrubby vegetation) up to 1800 above sea level. They are usually terrestrial but may climb shrubs and dense vines at night; some populations arboreal.
This gecko (50-63 mm SVL, up to 72 mm) is normally grey, olive-grey or green with pinkish green or brown tones with transverse bands or blotches, often also with fine longitudinal streaks.
The mouth lining pink, tongue pink with a grey tip.
The eyes are greenish or brown, sometimes with a blue edge.
This gecko varies in colour, patterns and in size geographically.
The variation areas are
Marlborough/North Canterbury: from Arthur’s Pass north it is medium-sized and has simple transverse bands
Mackenzie: Similar size as the Marlborough/North Canterbury, but the colour is very silvery grey, often with streaky markings and a vertebal stripe.
Tekapo: Smaller 55-60mm, and very dark colouring
Northern Otago and South Canterbury: In Otago, they are found in Wanaka, Chain Hills, Hawkdun Range and Kye Burn and all the islands in Lakes Wanaka and Hawea except Ruby Island.
In South Canterbury, they are found in the mountainous and arid regions.
In the Waitaki and Hakataramea Valleys, some are striped.
Their predators are ferrets, stoats, rats, and hedgehogs. 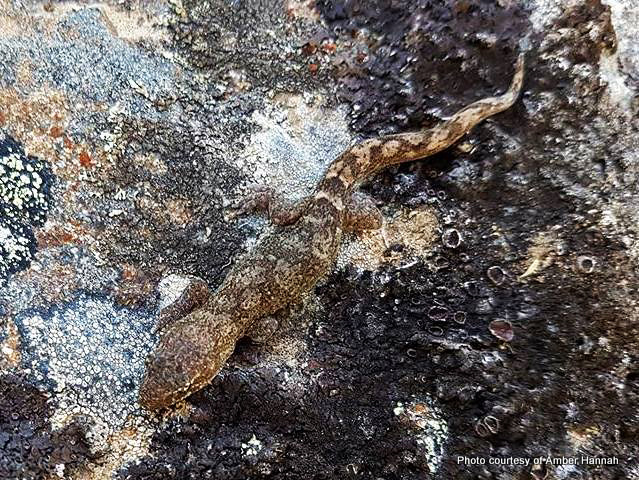 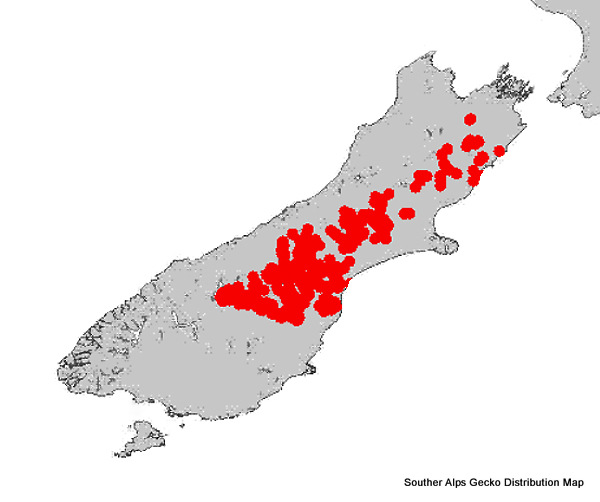