Trite planiceps is a common jumping spider endemic to New Zealand and one of about 150 species of jumping spiders in New Zealand. Males and females range in body length from 6 to 14 mm. As the common name suggests they are black-headed with a yellow/green colour strip down the middle of a darker abdomen. Females can often have a red strip down the thorax. The front pair of legs is longer than the rest.  In males, the first pair of legs is elongated, and they bear a row of dark hairs above the frontal eyes. Their chelicerae (the mouthparts including fangs which connected to venom glands) are also more robust than the females.

Trite planiceps often is found in flax and cabbage trees, during the day you can find them out and about hunting for prey. At night, they often hide in the curled up ends of flax and cabbage leaves. They often enter houses.

T. planiceps jumping spiders are active hunting spiders which have acute eyesight and intricate vision guided prey-capture behaviour. They pounce on prey from a few centimetres away. These spiders use silk as a dragline when hunting. It is harmless to humans. The Salticids is the largest family of spiders.

While most jumping spiders rely mostly on their very acute eyesight, T. planiceps has been shown to seize on prey in the dark, probably by means of vibratory signals. Unlike typical jumping spiders, they do not make nightly web shelters. As T. planiceps lives in low altitudes, this could be an adaptation to cool overcast winters, where they need to survive within the dim recesses of rolled-up leaves of New Zealand flax (Phormium tenax) and similar plants.These leaves are typically one to two meters long and 5 to 10 cm wide.
They also change from vision-based courtship in the open to vibratory courtship when mating inside a rolled-up leaf. If an immature female is within about ten days of maturing, the male will live with her for this time and then mate inside the leaf. The two are in physical contact for a while after mating and communicate using tactile signals. Upon entering a rolled-up leaf, both sexes will tap the leaf surface with the first pair of legs and vibrate their abdomen.
Juveniles and subadults build flat, tubular silk cocoons with a door at each end inside rolled up leaves. Adult females build a silk platform 50% longer and two to three times wider than their own size before laying up to seven egg batches with 8 to 40 eggs each. Each batch is enclosed in its own silk casing. Males normally do not build nests.
A wide array of behavioural patterns has been observed, among others ritualized male duels.

Female spiders have a red patch on the cephalothorax. 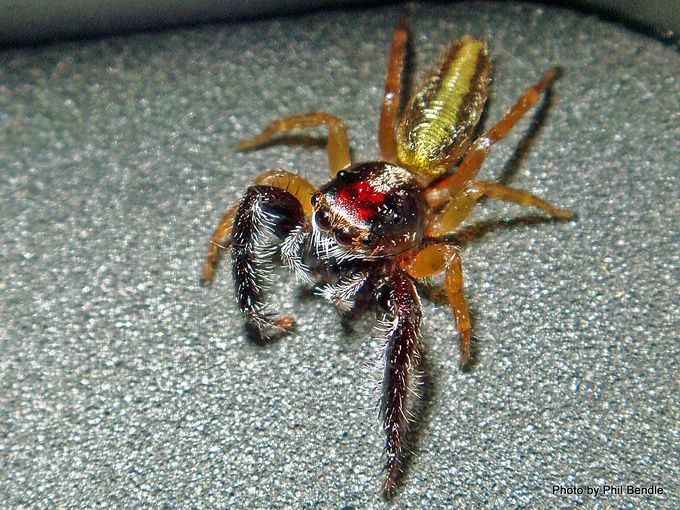 Same female as in the photo above. 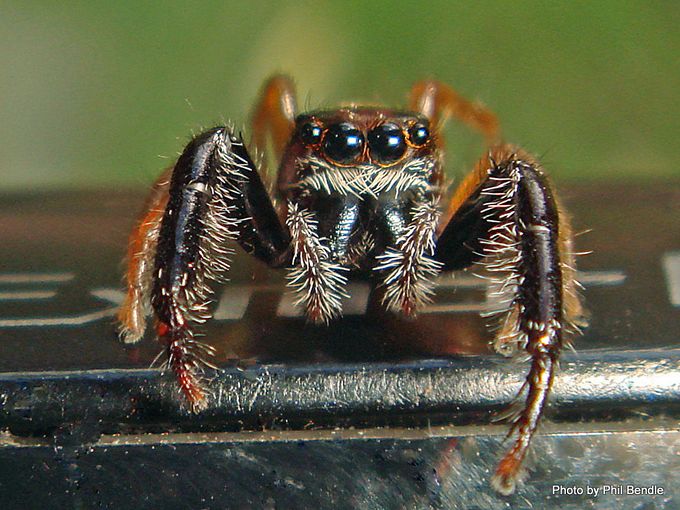 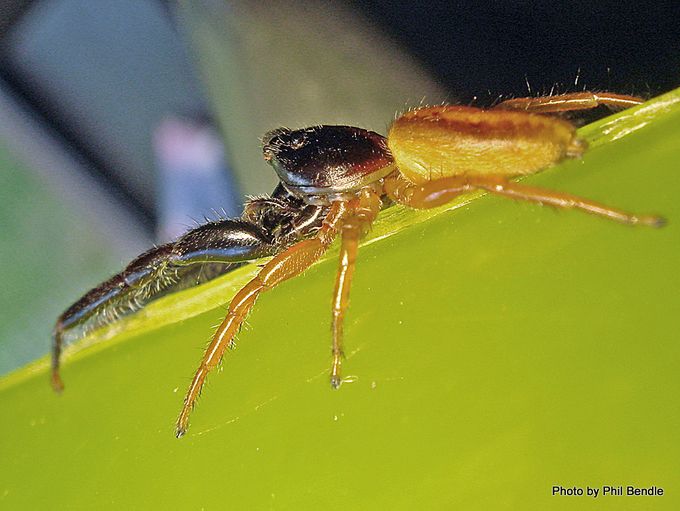 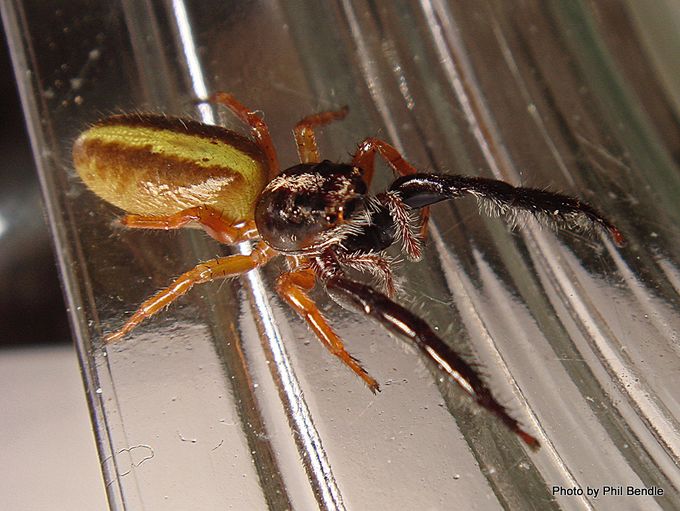 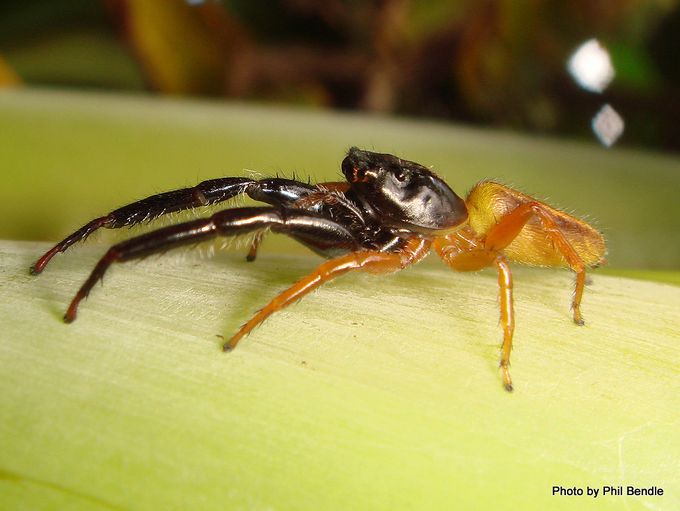 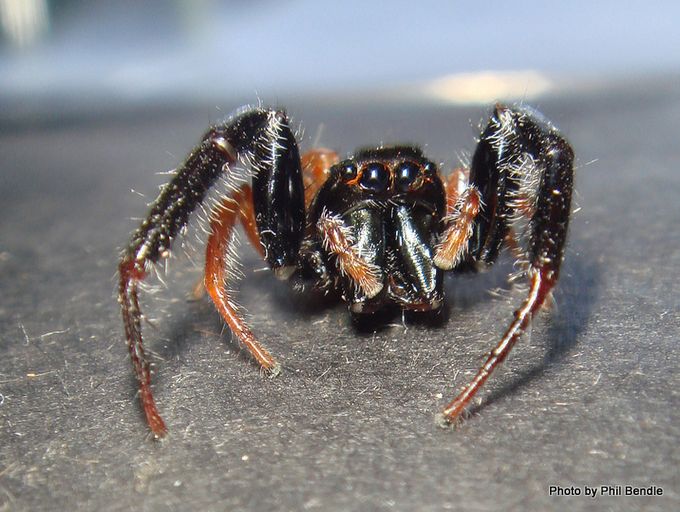 A young male with white patches on their cephalothorax it disappears as they mature. 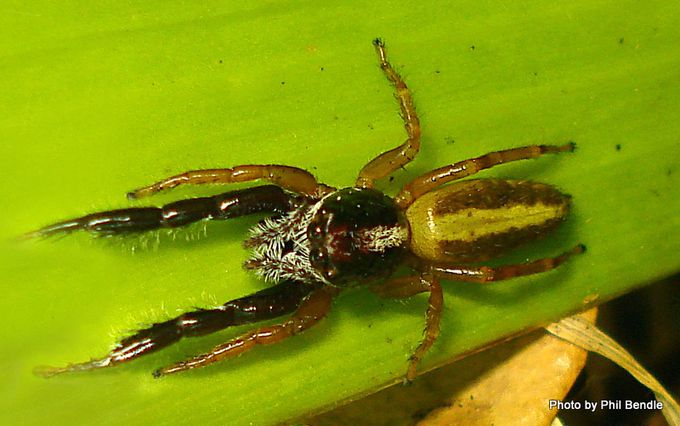 Male whose white patches on its cephalothorax has disappeared 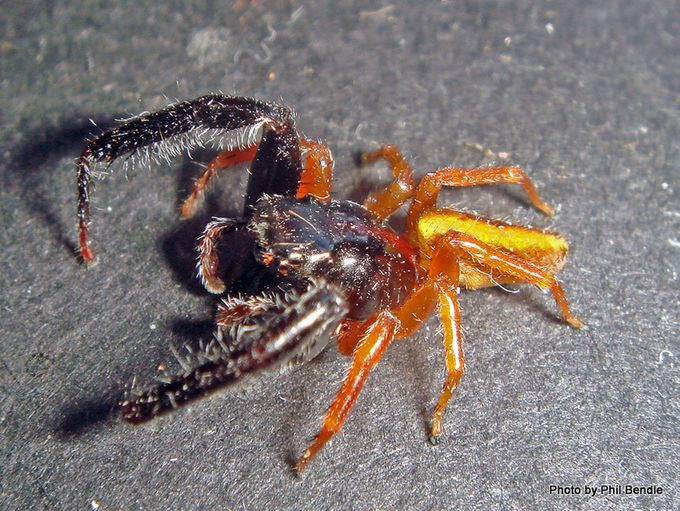 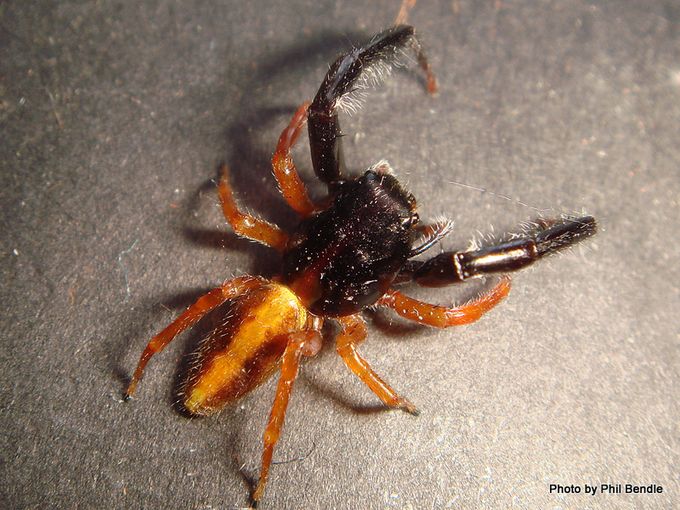 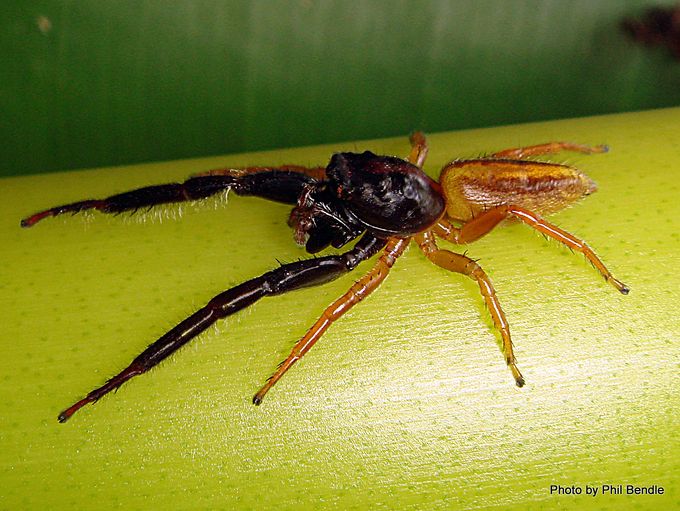 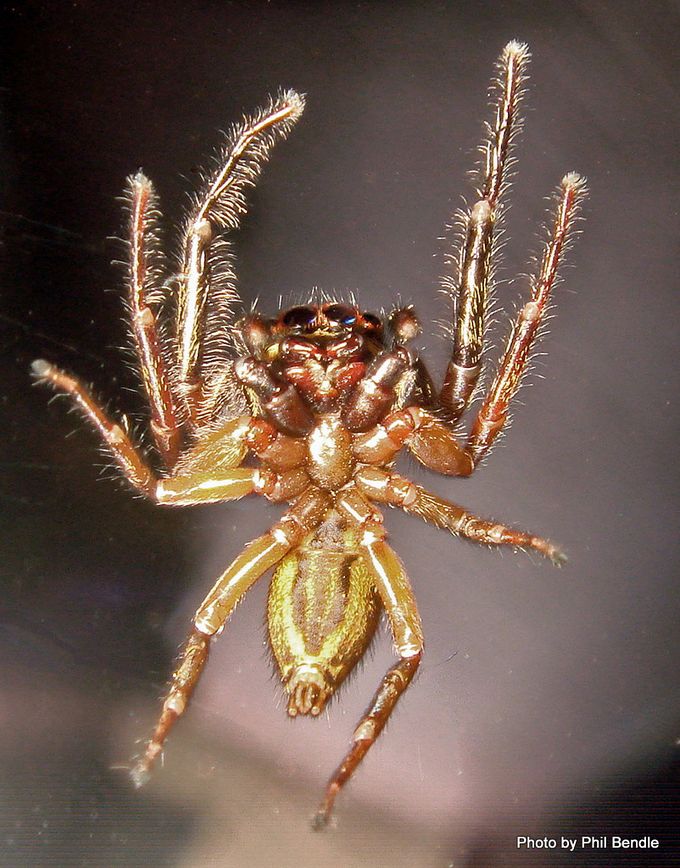 A form of Trite planiceps with a green body. Was found on a flax which might explain the green body. 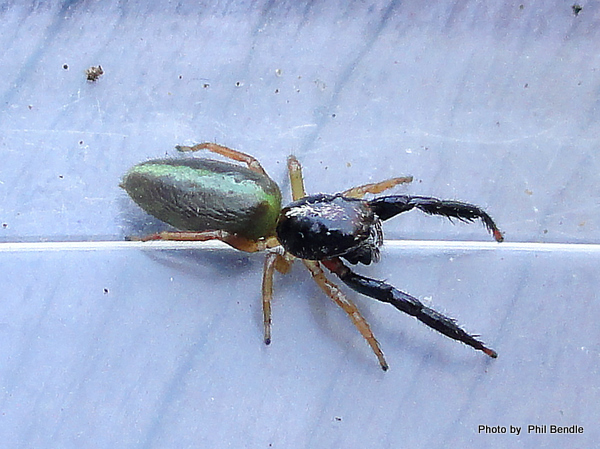 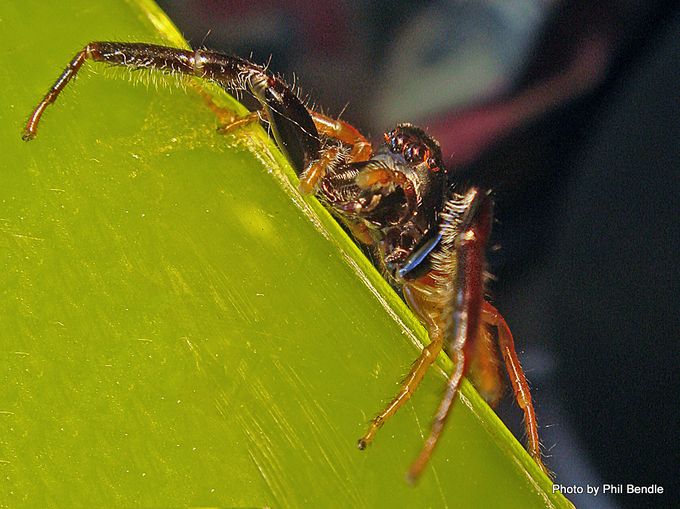 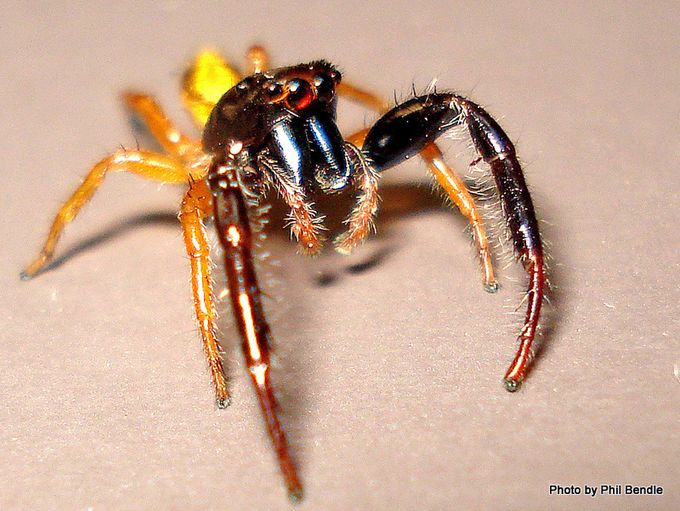 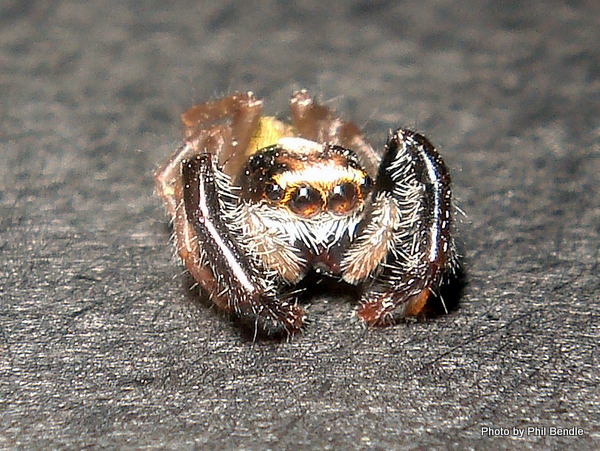 A Trite planiceps being attacked by a cellar spider. 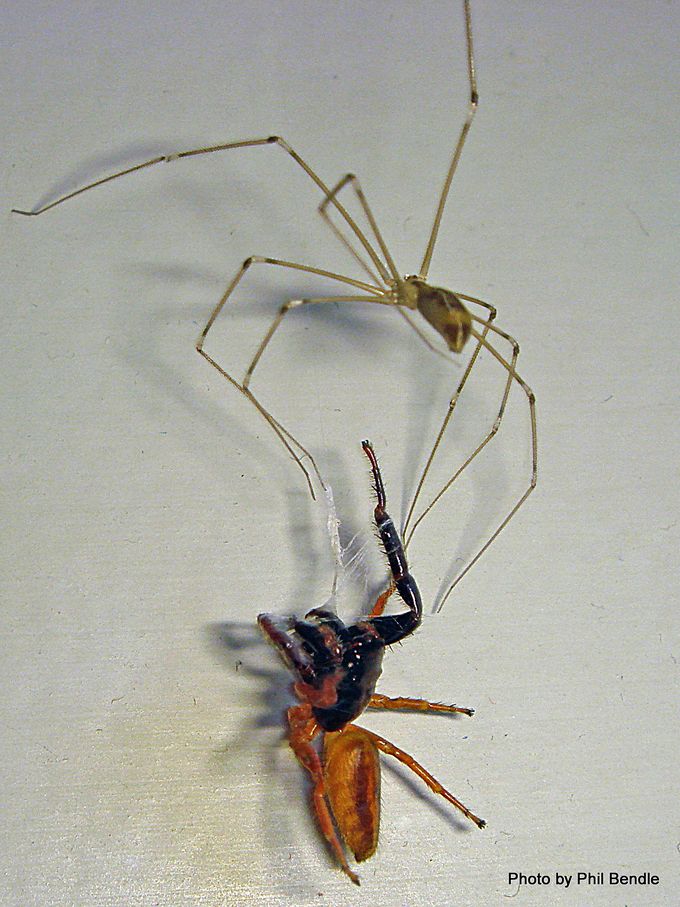 The diagram below is of the visual fields of a jumping spider as viewed from above. The function of the small posterior medial eyes (PME) is not known. 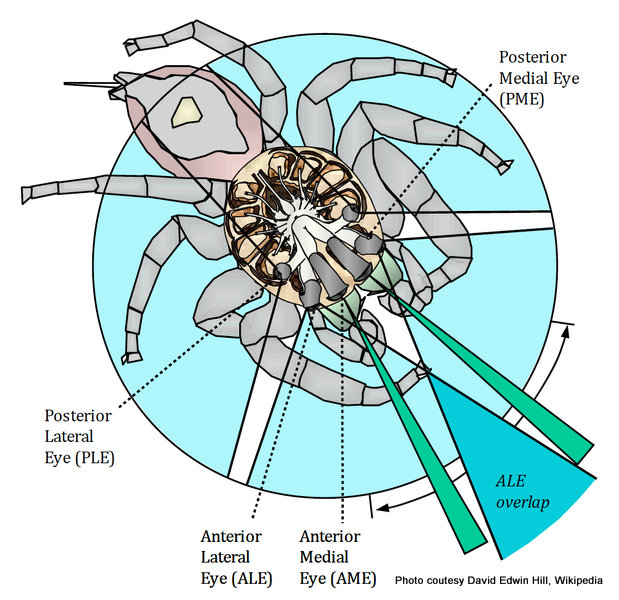