Deleatidiums are one of New Zealand's most common and widespread mayfly. They have the three long tails, a feature typical of mayflies. The flying adult's lifespan can vary from just 30 minutes to one or even two days depending on the species. The primary function of the adult is reproduction; the mouthparts are vestigial (non-functional), and the digestive system is filled with air.
Deleatidium aquatic macroinvertebrate nymphs are the most abundant invertebrates in many fast-flowing, stony-bottom streams with cool, well-aerated water, especially in the South Island’s mountains and bushy areas. They have a flattened body form that allows them to hold on to stones in fast flowing streams. The nymphs, like most mayflies, have leaf-like gills along the sides of their body. In many mayflies, these gills are arranged in pairs, but in Deleatidium the gills are single. Deleatidium has a wide labrum, this is a flap-like structure that lies immediately in front and top of the mouth.
The nymphs feed by scraping diatom algae and other organic matter from stone surfaces. They are not found in streambeds that are too heavily covered by algae. High numbers of Deleatidium suggest good water quality conditions, especially if other mayfly or stonefly groups are abundant.
Deleatidium larvae provide an ideal food source for fish so their abundance can increase the growth rates and size of fish in streams and rivers. 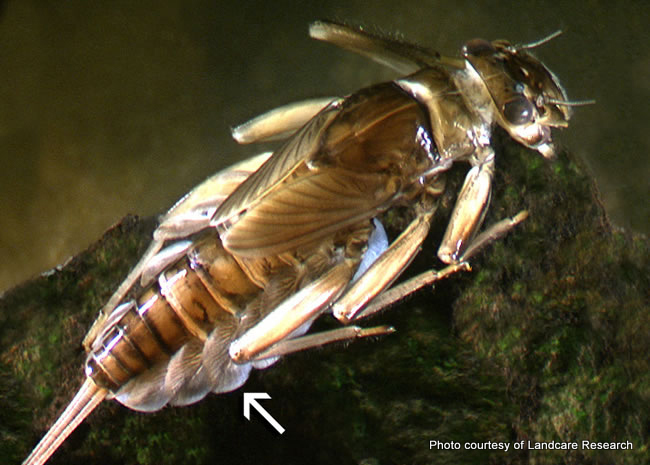 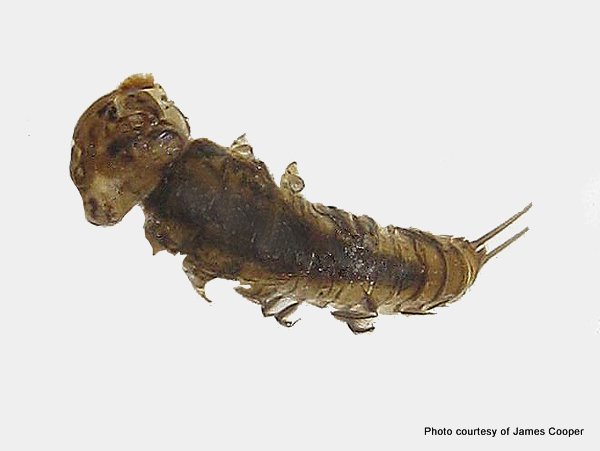