Water mites are arachnids with four pairs of legs (at least as adults). Mites have only one main body segment. Freshwater species are good swimmers which is made possible by the presence of swimming hairs on their legs.
Some feed on organic mater while some are parasitic and attach themselves to other invertebrates, like the damselfly in the photo below.
Ectoparasitic water mites are important parasites of aerial stages of aquatic insects. Their larvae parasitise semi-aquatic hosts and must detach while the host is in a suitable habitat for reproduction of parasite and host. Adult mites detach during tandem oviposition by the host. Detachment occurs only at a height up to 10 mm above water. 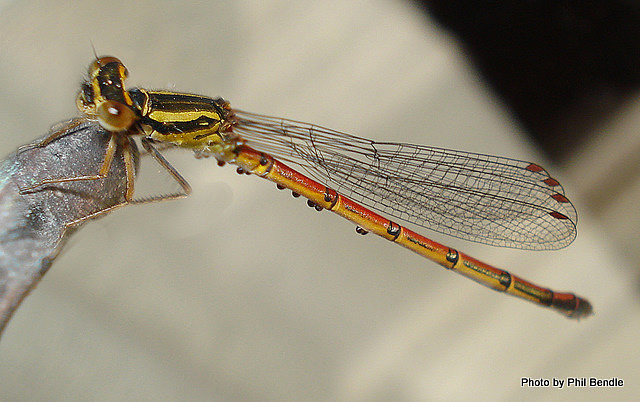 Scientists Jose Andres and Adolfo Cordero of the Universidade de Vigo, Pontevedra, Spain, took a close look at parasitism in their research “Effect of Water Mites on the Damselfly, Ceriagrion tenellum,” published in a 2002 edition of Ecological Entomology.

They pointed out:
1. "Water mite parasitism is expected to have an important effect on damselfly survivorship and reproductive success, because mites drain considerable amounts of body fluids from their hosts," they wrote in their abstract. "This study tests the effect of water mite parasitism in a marked population of the damselfly Ceriagrion tenellum during 1995 (individuals marked as mature adults) and 1996 (individuals marked as tenerals)."

In conclusion, they found that "water mite parasitism does not reduce damselfly survivorship, but it could reduce male mating success in some circumstances. Further long-term studies are needed, especially in populations with a lower incidence of parasitism."