Gambusia affinis is small freshwater fish which was first released for mosquito control into an Auckland Botanical Gardens pond in the 1930s from a shipment from the Gulf of Mexico. They were also released in Northland, Taranaki and Wellington. They have now spread to many North Island waterways due to a natural spread and also by further illegal introductions. There are now populations throughout Northland, Auckland, Waikato, Bay of Plenty and Hawkes Bay and around Whanganui.

Gambusia affinis is now a pest fish which is negatively impacting our freshwater ecosystems as they are aggressive and attack native fish nipping at their eyes and fins. They also compete with native fish for food and have been known to eat native fish eggs.

Their habitat is the shallow margins of slow flowing ponds, wetlands and streams, particularly around aquatic plants. They can tolerate poor water quality, high salinity levels and a wide range of water temperatures.

Gambusia affinis have a greenish sheen. Mature females reach an overall length of 7 cm and males are smaller at 4 cm. The female can be distinguished from the male by her larger size and a gravid spot at the posterior of her abdomen. A single gambusia female produces several broods a year and around 50 offspring per brood. The young mature at six weeks old and are short-lived but breed rapidly and repeatedly enabling populations to build up to large numbers very quickly. Females give birth to live young. Consequently, only one pregnant female is needed to start a new population. 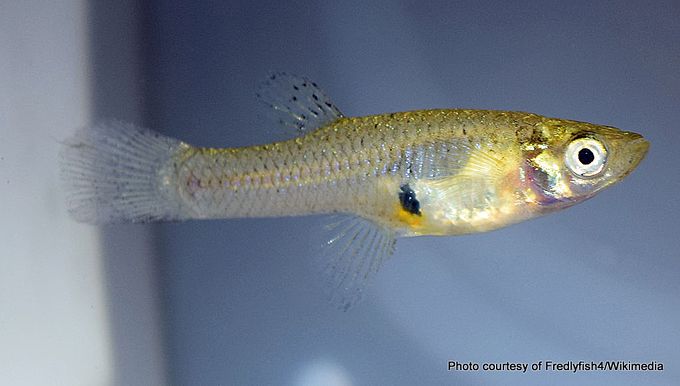 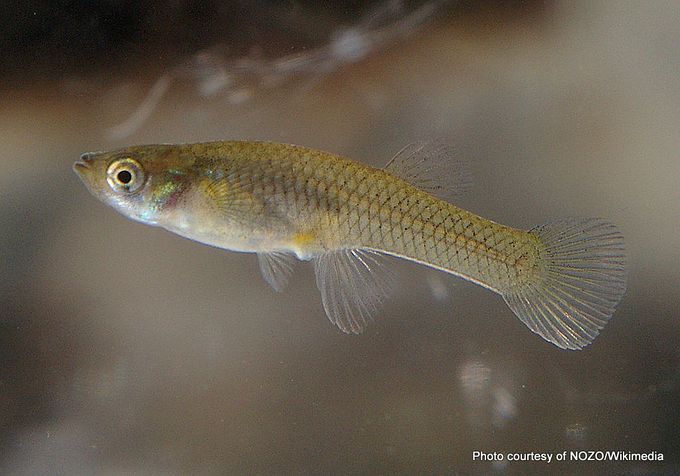