Nursery web spiders are large and fast-moving with a leg span of six centimetres or more in adult females. Males are somewhat smaller. These spiders are typically pale brown or greyish in colour with yellow bordering around the cephalothorax (the frontal portion of the spider that bears the legs, fangs, and eyes).
The D. minor species typically has a substantial yellowish stripe running lengthwise from the front to the middle of the abdomen (the rear portion of the spider). .The males are much smaller with thinner legs. Dolomedes minor can be found throughout New Zealand.

Nursery web spiders are known for their webs, yet they do not use them to catch prey. The webs of these spiders are a common sight on gorse and other shrubs and are, as the name suggests, literally nurseries for young spiderlings.During summer, the female nursery web spider can be seen roaming about carrying a large white ball underneath her. This is her egg sac and she carries it everywhere in her fangs until her young are ready to emerge. When this time comes, she takes the egg sac to the top of a tree or shrub and constructs the nursery web. The mother stays close, and during the day can often be found near the base of the plant where she has deposited her young. Secure inside the nursery web, the young spiderlings emerge from the eggsac and remain here for about a week or so before dispersing by ballooning.

Dolomedes minor actively hunts and scavenge for food at night. The prey spectrum of the spider consists of a variety of small organisms including locusts, other spiders, Dobsonfly larvae, earthworms, bees and other small insects. 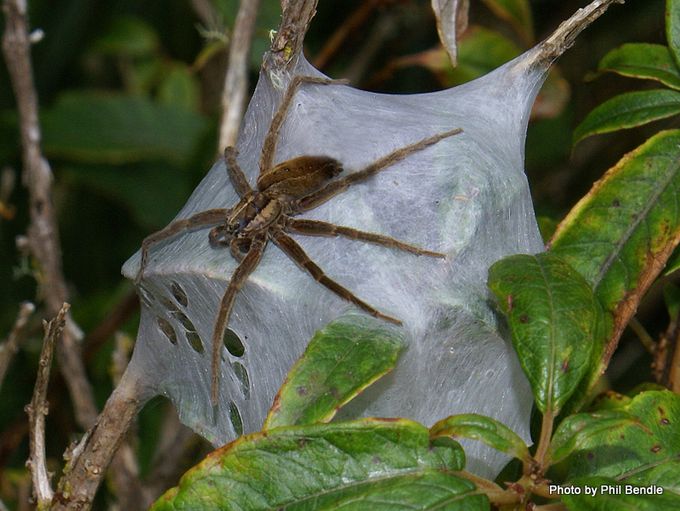 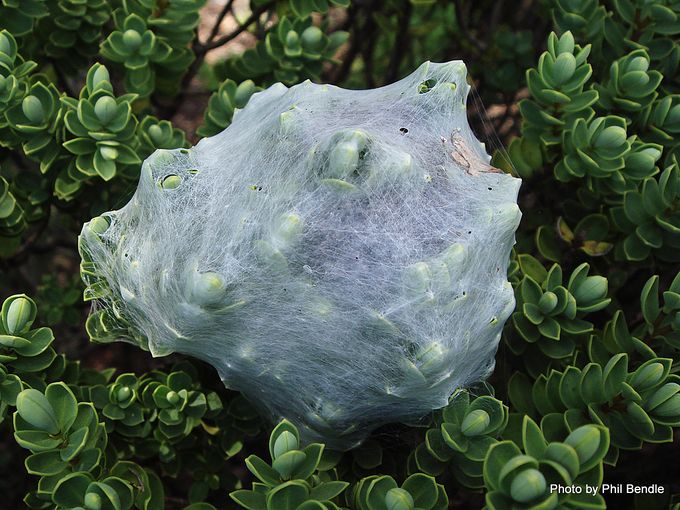 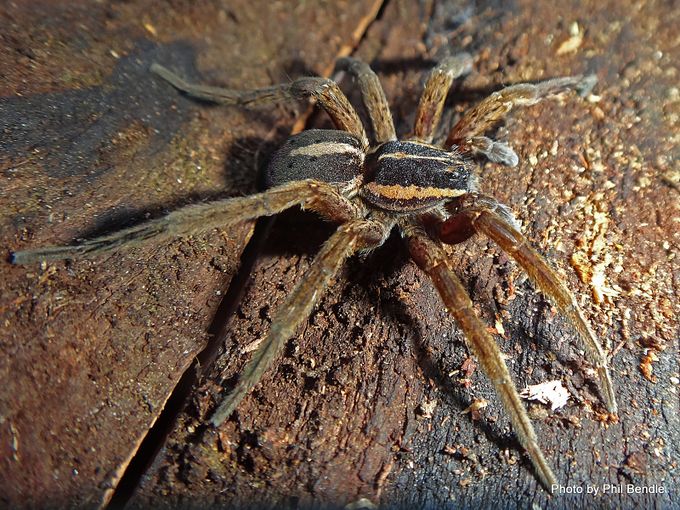 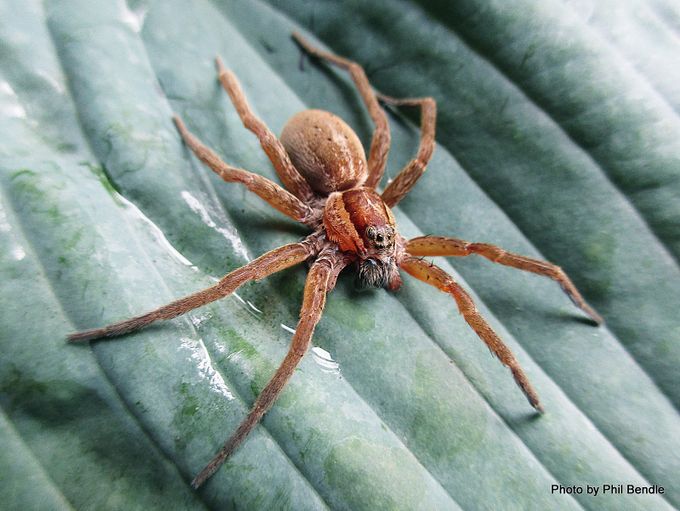 A male The males are much smaller with thinner legs. A leg of this male was 2 cm long, Body 14 mm long 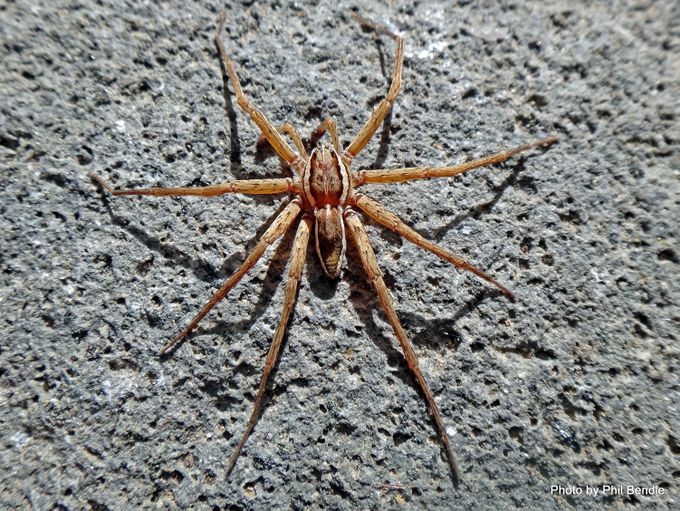 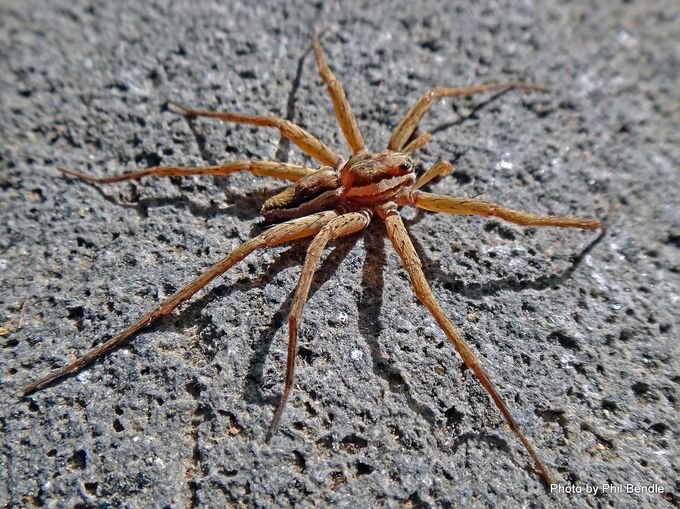 A male, notice the swollen palps. 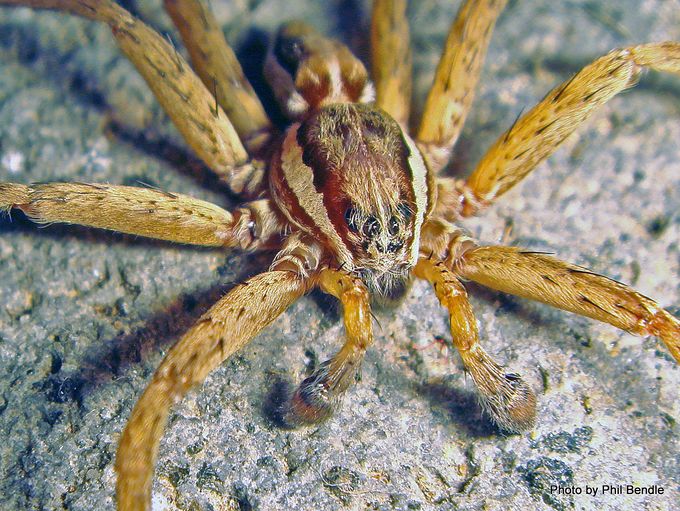 Female of a darker colouration. 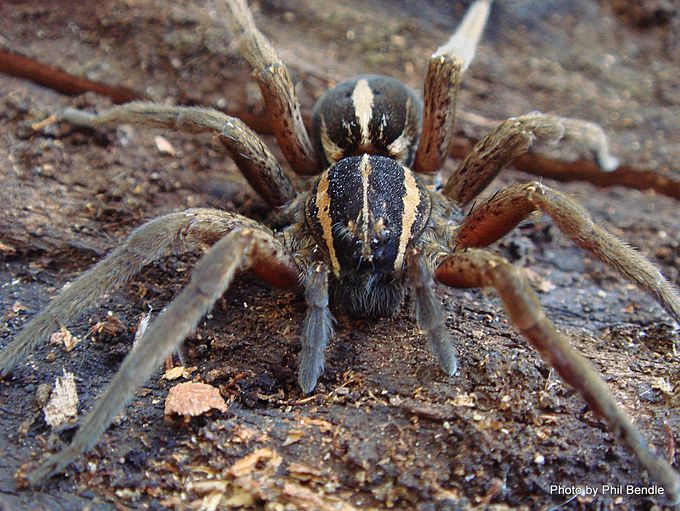 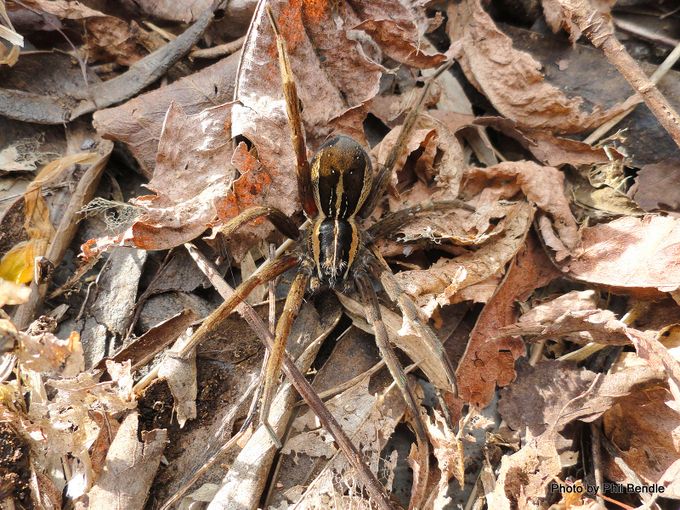 The Dolomedes minor spider in the photo below has a leg span of 6 cm. 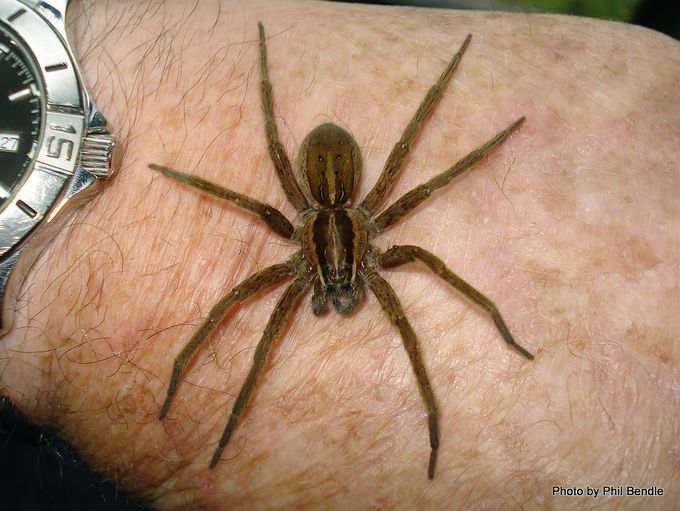 Close up of a female Dolomedes minor head showing fangs and palps. The palps in the front are used for sensory purposes. In the male the palps are modified for putting sperm into the epigyne of the female, that is situated on the underside of the abdomen. The jaws are located below the eyes and are called chelicera. The piercing parts of these jaws are the fangs that deliver the venom via a small hole at its tip. 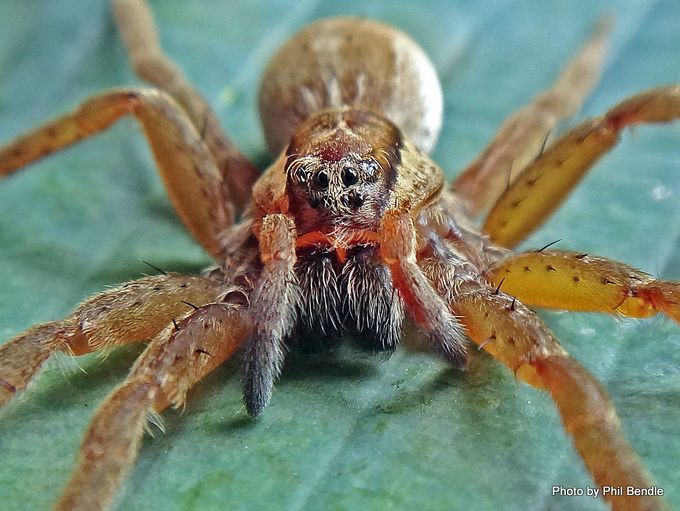 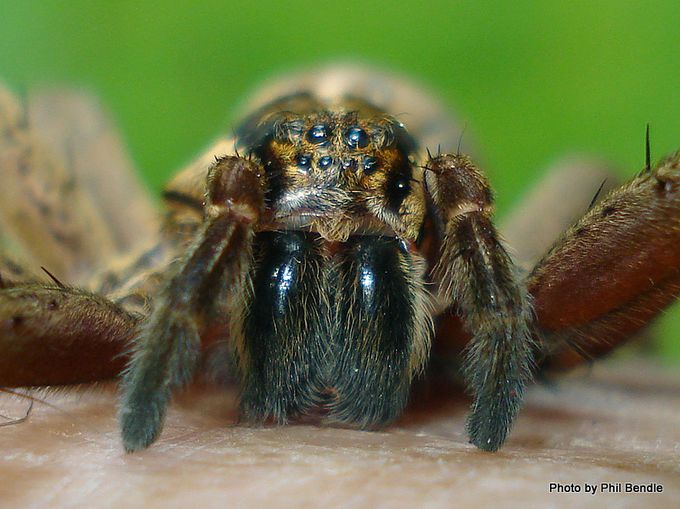 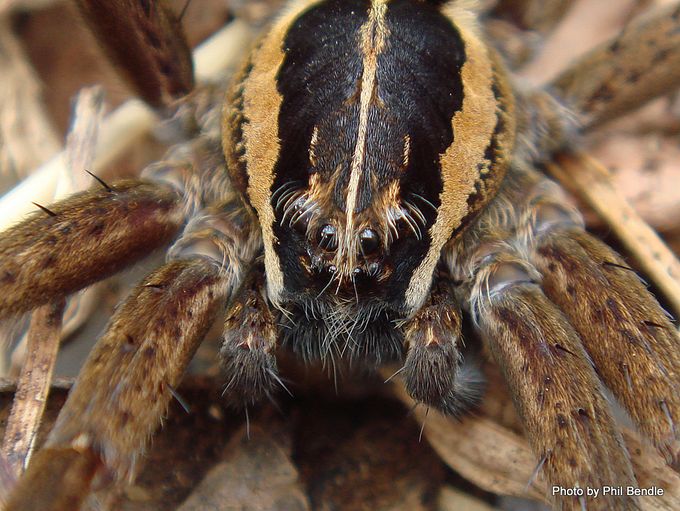 Dorsal view of a Dolomedes minor. 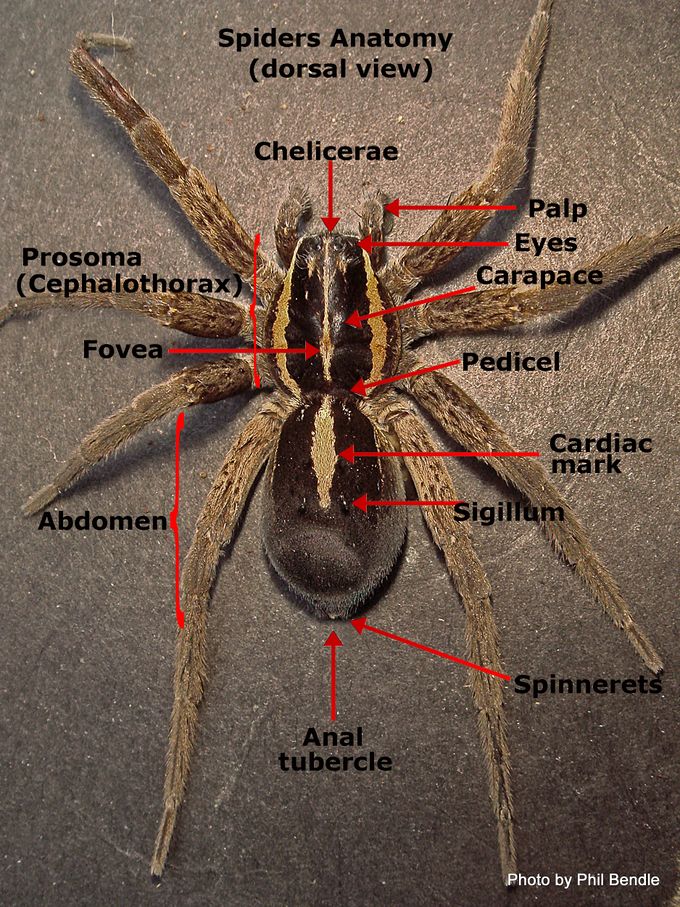 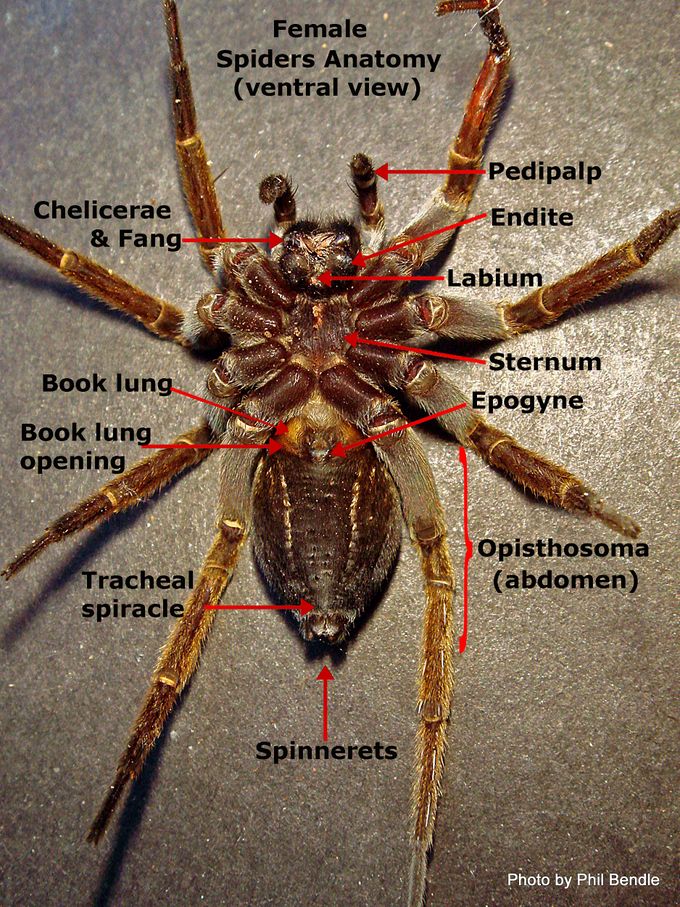 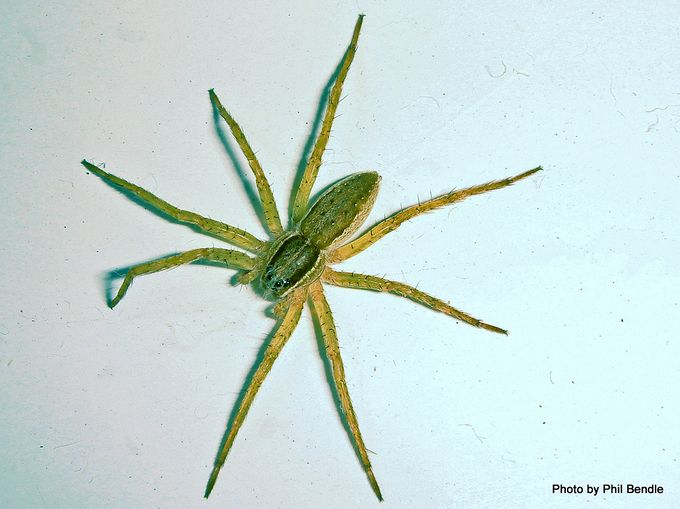 A nursery spiders nursery web and her eggsac inside 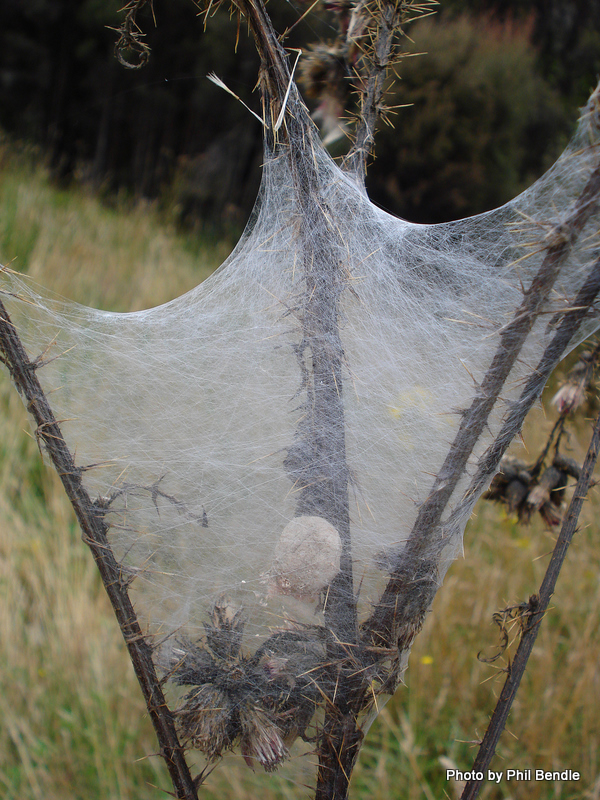 Inside a nursery spiders nursery web,  The egg sac from which the spiderlings have left can be seen bottom left. 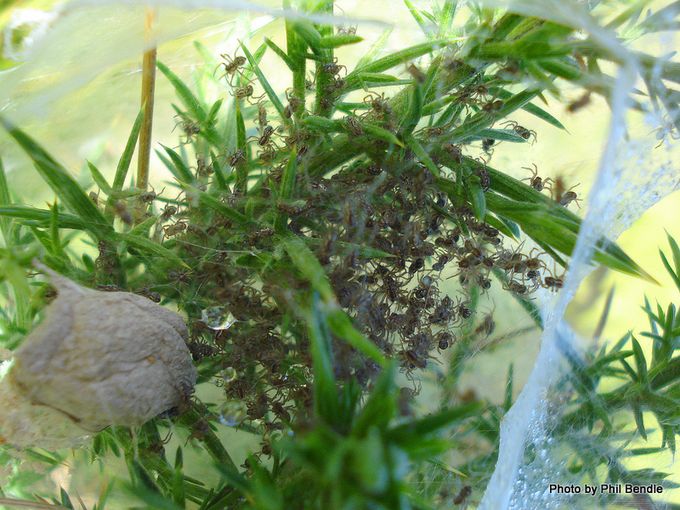 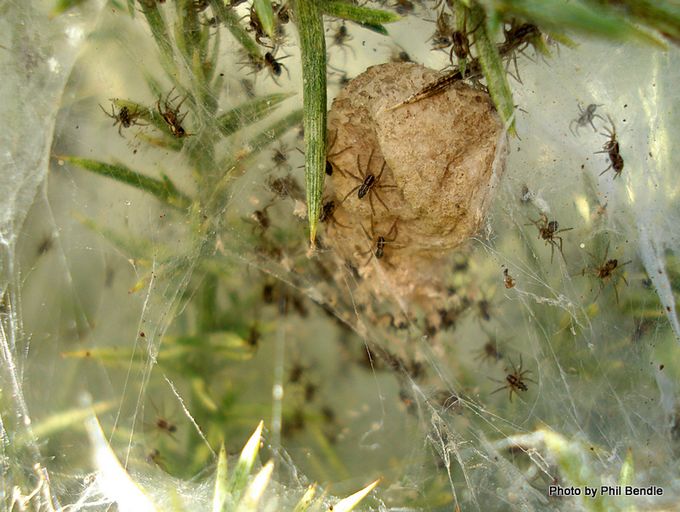