This spider is an Australian immigrant and is now one of the commonest orbweb spiders in New Zealand.
It is thought that this spider originally floated here in the jet stream from Australia. This species colour pattern is incredibly variable, from white to black and yellow to orange through to amazing mosaic patterns.
This species can be recognised by five large knobs on its back. Two large ones are on the highest point of the back and three smaller ones at the end of its abdomen. They have sometimes a couple of other small ones in the end group.
It is a small to medium sized spider with a body length up to 12 mm. It is a maker of the classic circular webs. At night they sit in the centre of the web waiting for any flying insects that are caught on the web. When the insect is trapped it wraps the prey in silk to reduce struggling and then eats it at leisure.
A typical orb web spider will construct or repair its snare by night, then sit in the centre. This central portion of the web is dry, but the spiral of silk a little further out from the centre is sticky. This is the part of the web that actually traps prey.
By day, the spider usually hides outside the web but will rest a leg on a thread that runs to the centre. This allows the spider to remain out of sight of predators while still being aware of any prey that gets caught in the web.

This species of orbweb spider is very variable in colour and patterns.See photos below. 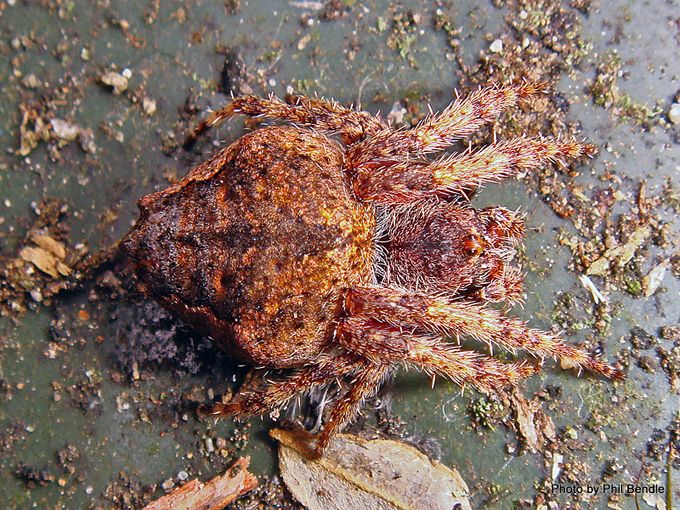 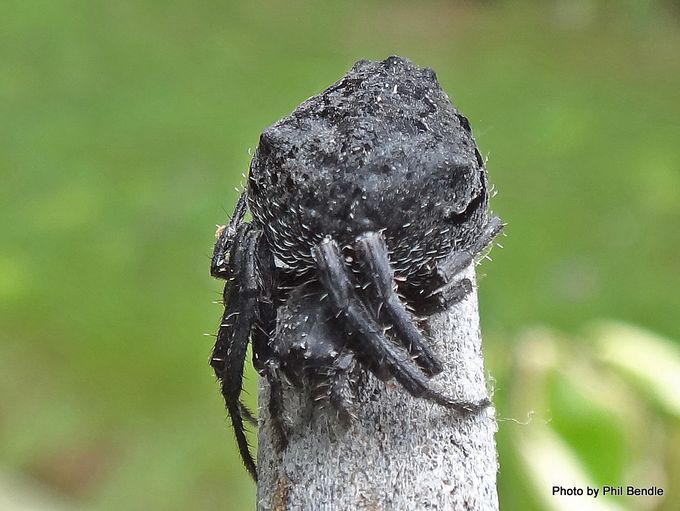 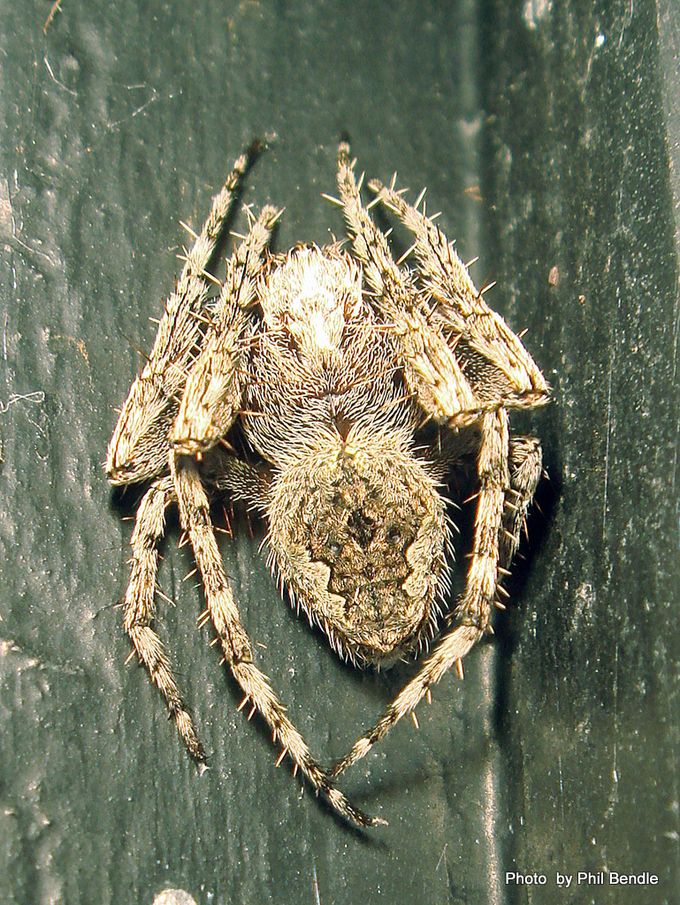 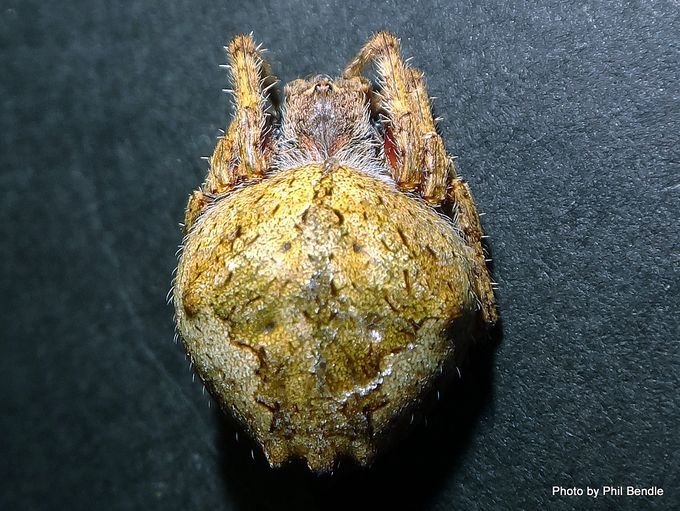 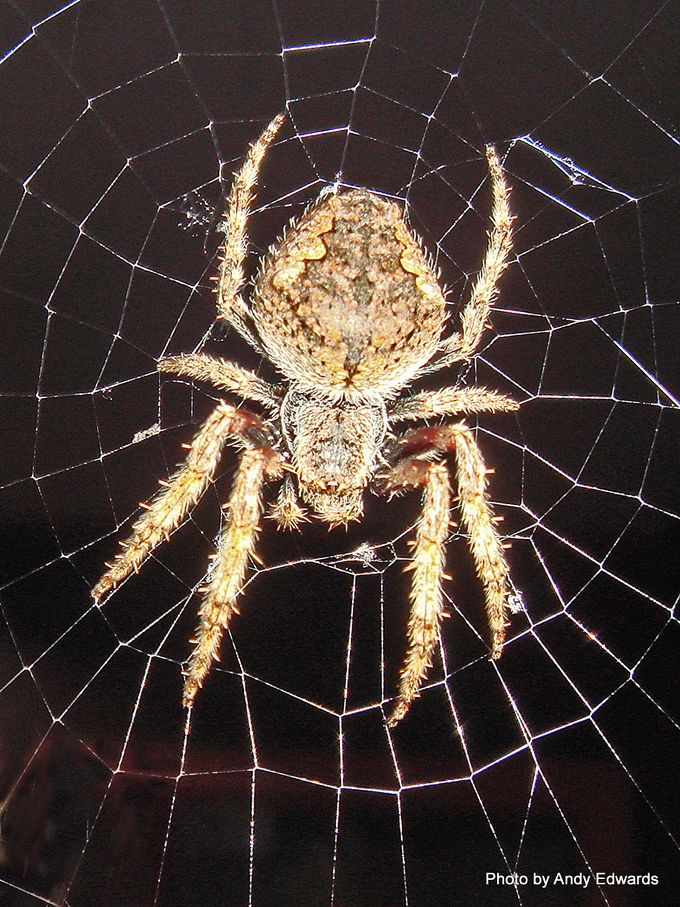 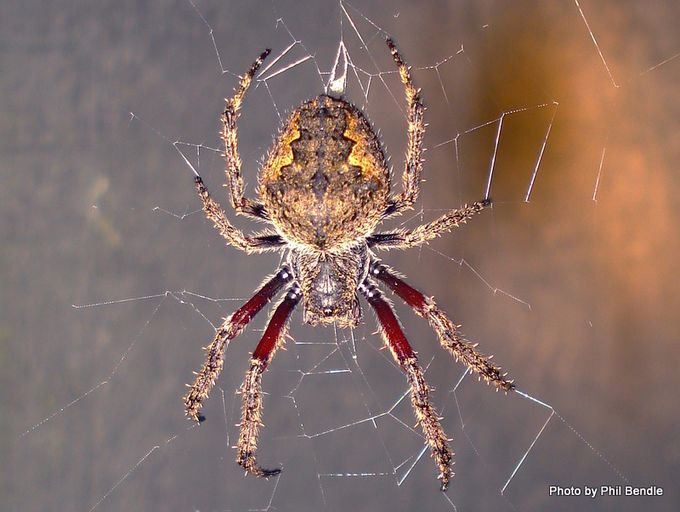 This species can be recognised by bumps on the abdomen. 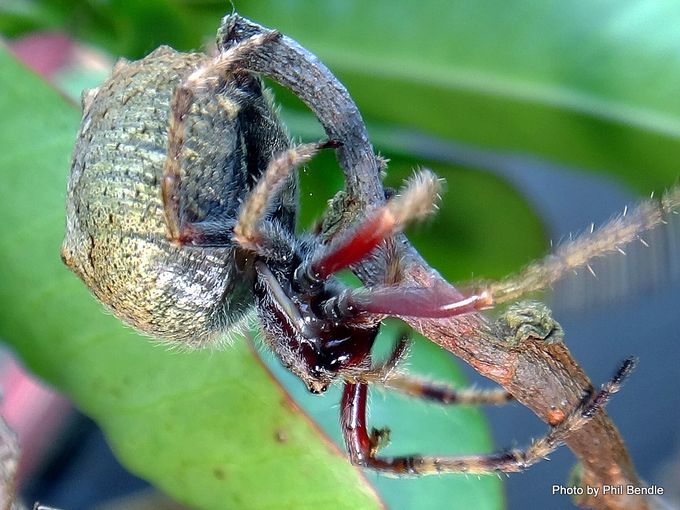 Eriophora pustulosa with an unusual white band across the front of its abdomen. 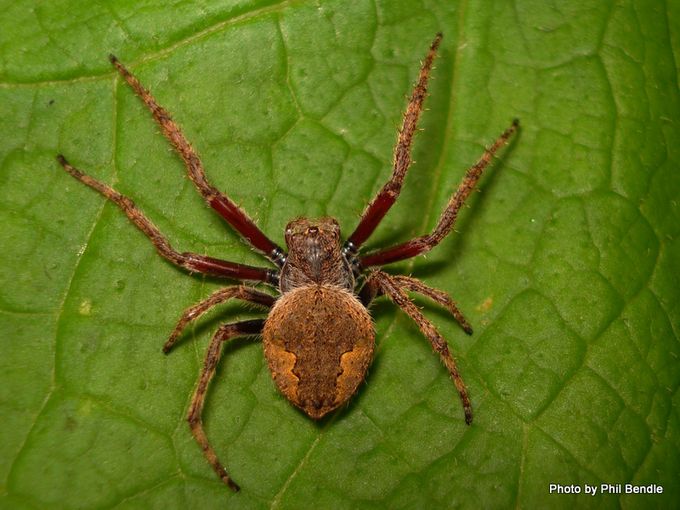 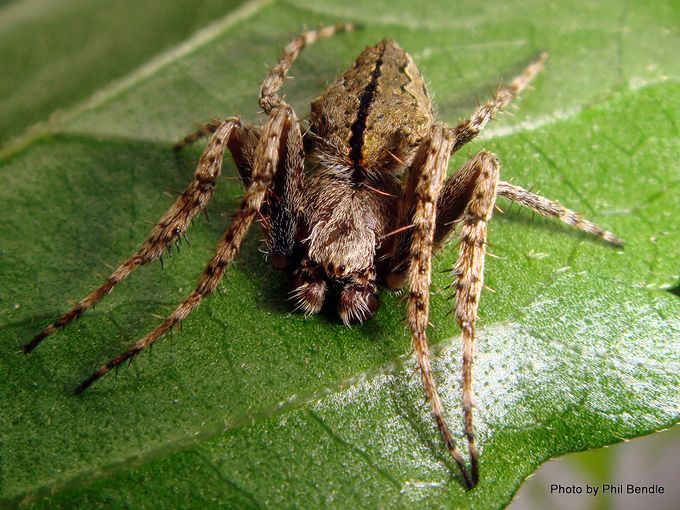 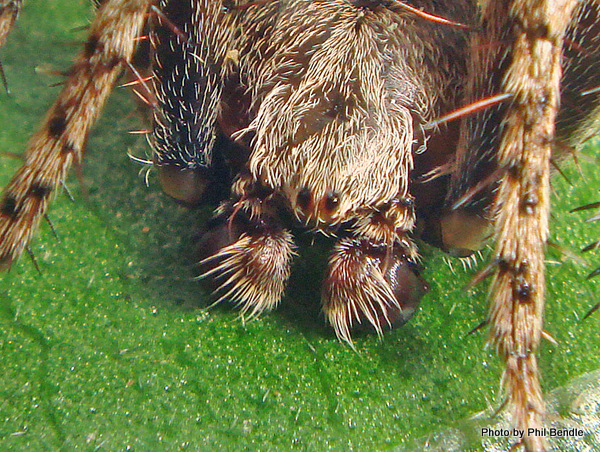 The underside of an Eriophora pustulosa 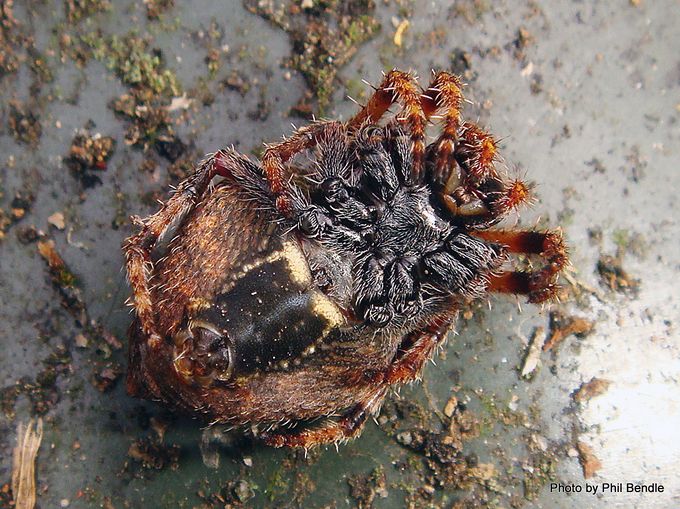 A spider in defence position[http://ketenewplymouth.peoplesnetworknz.info/image_files/0000/0006/6704/Eriophora_pustulosa__Garden_orbweb_spider.JPG

]
A black orbweb aside its egg nest.

The photo below shows the distinctive five lumps on their back. Two high on the front and three at the tail end 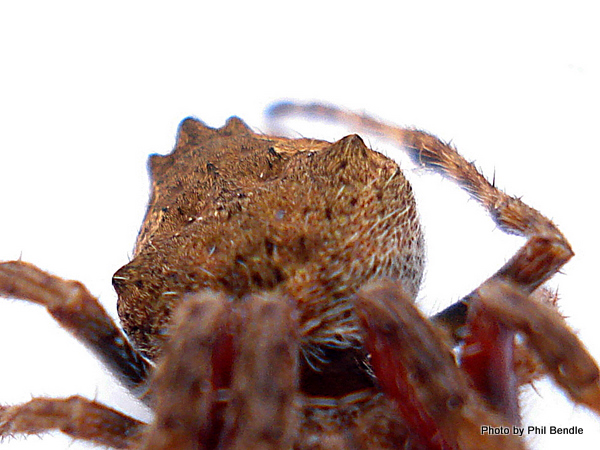 The male which is smaller.than the female. 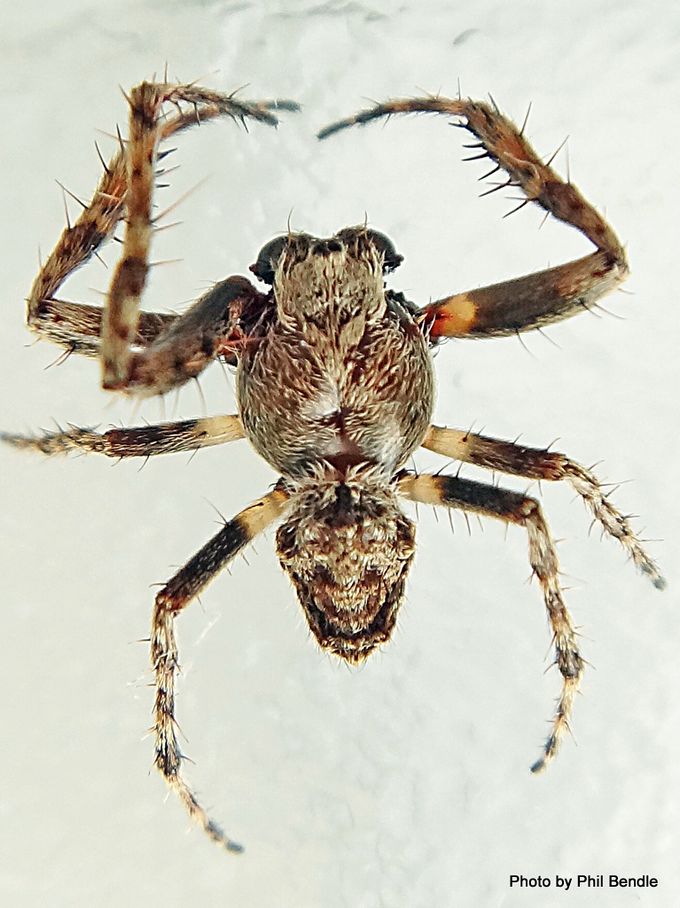 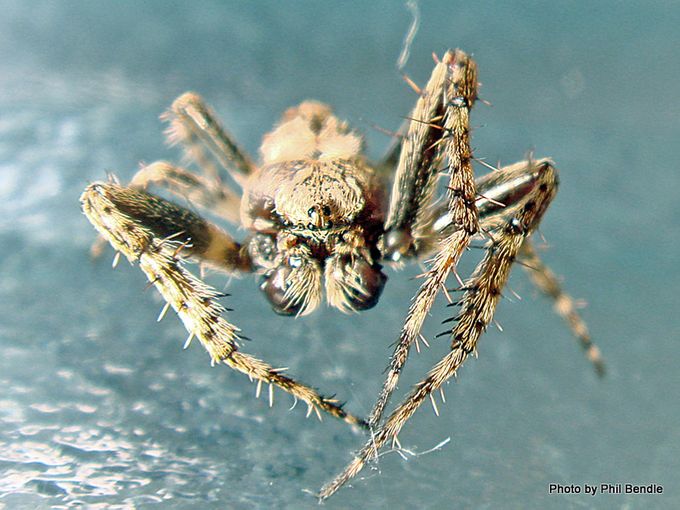 The egg sac of Eriophora pustulosa resembles a messy tuft of wiry threads and is usually grey-green in colour. 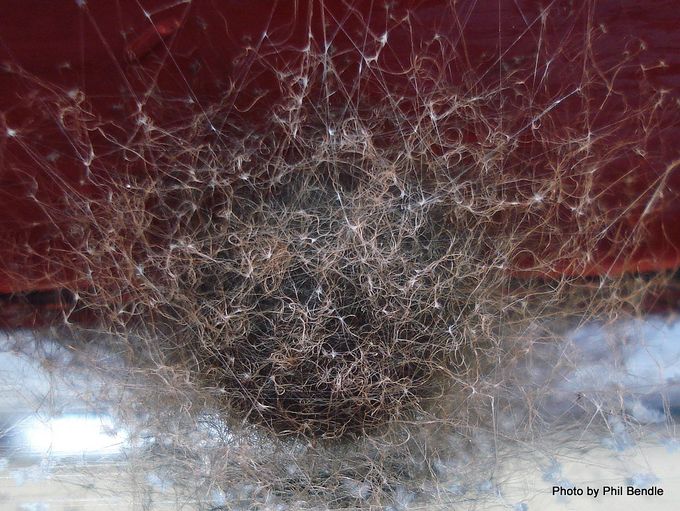