Zygiella x-notata (The Missing Sector spider) is orb-weaving species found worldwide and is one of the few spiders to remain active throughout the year.
The females are up to 11mm in size, males up to 7mm. The abdomen of the male is smaller than the female. Females can be seen all year round. Males are usually more active during the summer months.
The Missing Sector spider has a silver-grey coloured abdomen with a brown oak leaf pattern on the back. The legs dark brown with light brown bands. It is usually building its web on windows frames, around houses but can also be found on walls, fences.
This spiders orb-web has a triangular section missing in the upper part of the web, being left free from any crossing spirals. This missing section is the reason for its common name. A single signalling strand of silk runs through the middle of that missing section, this leads to the spider's retreat. In the evening and at night, however, the spider sits in the centre of the web. It renews the web in the morning hours.
The spider when alerted by movements of caught prey, it moves out and kills its prey and then takes it back to its hideout.
Females and males can often be seen together in one nest. Before mating, the male plucks and drums on a special thread attached to the web of the female. The eggs overwinter in a cocoon, the spiderlings hatch next spring. 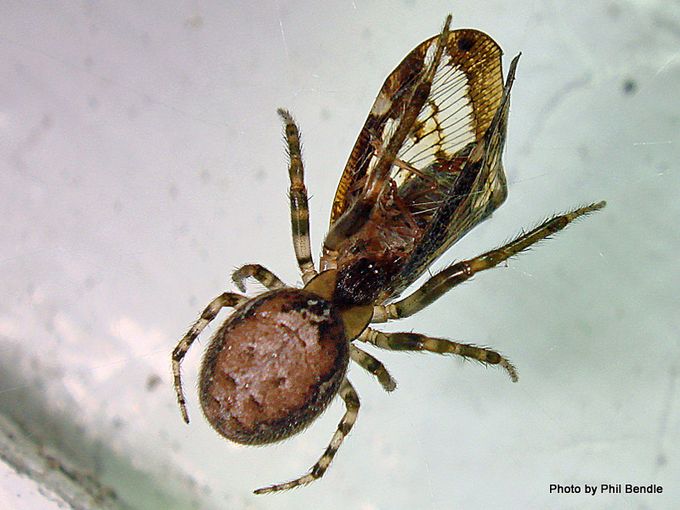