Rainbow trout (Oncorhynchus mykiss) are native to the westward draining rivers of North America and also to the Kamchatka Peninsula on the western side of the Pacific Ocean. The New Zealand rainbows are descended mainly from Californian steelheads, a rainbow trout that migrate to sea and spend most of their lives there. New Zealand rainbow trout do not migrate to sea.
They were first introduced to New Zealand in the early 1880s. Ova imported in 1883 by the Auckland Acclimatisation Society survived, and fry was released into local waterways. In 1892 the species was liberated in Lake Rotorua, and in 1897 in Lake Taupō. Rainbow trout are less widespread than brown trout. There has been virtually no natural dispersal. Nearly all the rivers where they did establish themselves flow into large lakes – in the central North Island, and the southern South Island.

The colour pattern of rainbow trout is variable. Lake-dwelling fish are generally uniformly silver with small, darker spots along the back, mainly above the lateral line. The backs of river-dwelling fish are often more olive-green, and the red band, or rainbow along the lateral line more prominent. When rainbow trout move into rivers and streams for spawning, this band intensifies in colour, and red slashes may occur on the cheeks and in the folds beneath the lower jaw.

Spawning occurs during June and July, but the season can be extended to October in some lakes. Several hundred to several thousand eggs are laid in a small hole by the female and fertilised by the male. After 1–3 months the eggs hatch into alevins (fry with yolk sacs attached). These live in the gravel, feeding on their yolk sac. They then emerge as fry, about 25 millimetres long. By late summer they have reached 50–70 millimetres.
As juveniles and spawning adults they live in streams, where they are exposed to predators on the banks. Adults usually run upstream from a lake to spawn in late winter and early spring, in headwater streams with gravel beds. Not all rainbow trout survive spawning.
Much of the central North Island winter fishing is centred on rainbow trout running upstream from Lake Taupō to spawn in tributaries such as the famed Tongariro River. 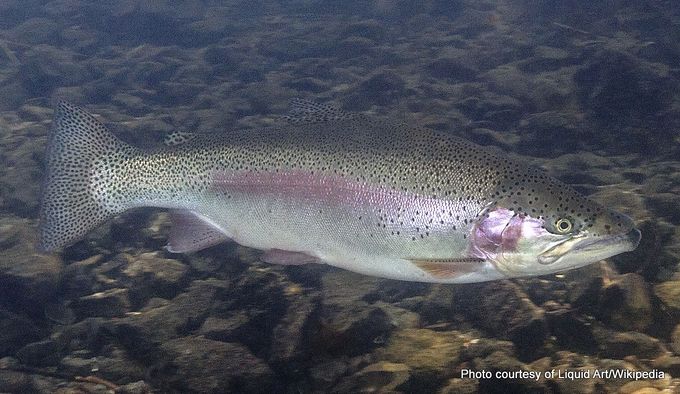