Porrhothele antipodiana is a large, bulky, funnel web spider that is found in the lower NorthIsland, the South Island and the Chatham Islands. These shiny dark funnel-web spiders are identifiable by their size (30 mm in body length), aggressive manner, hairy grey/purplish abdomens, black hairy legs and a leathery looking red/brown carapax (headplate). The carapax can sometimes be totally black.

They typically live under logs and rocks in bush and gardens or in other places where can spin a tubular web tunnel (about 200 mm deep and 20-30 mm across) and can have a broad area of sheet web at the entrance for the detection of prey. This entrance web figures strongly in prey capture and shows considerable variation in different environments. Vibrations of the sheet of silk at tunnel entrance alert the spider to prey nearby. The sheet web is not sticky like an orbweb spiders web, so P. antipodiana has extra speed and hunting ability to ensure that captures are made when prey enters its web. Though some spider species remain in the one burrow for the duration of their life, P. antipodiana will move from one site to another.

During the day it hides inside and when it’s dark it comes out and waits at the entrance of the tunnel. P. antipodiana eats almost anything that comes near its web. Its prey usually consists of beetles, spiders, millipedes, slaters, moths, snails, bumble bees and wasps. It has been reported that they have eaten mice. In the case of wasps and bumble bees, the spider invariably grasps them from behind the thorax thus avoiding the sting. When capturing its prey it usually stabs the animal with its chelicerae (jaws). It stabs more than once to ensure deep penetration of the venom. In dealing with hard-bodied forms such as the beetles the spider has to manoeuvre the fangs until they slide into a joint or a soft spot.  The chelicerae, along with the palps serve to hold the prey for carrying it back to the tunnel where it will be eaten.

Bites are painful as they have very large fangs and may cause localised swelling, itching, or numbness like a bee sting. Victims are advised to clean and disinfect the area to reduce the risk of infection. There haven't been any reports of fatalities from bites of Porrhothele. 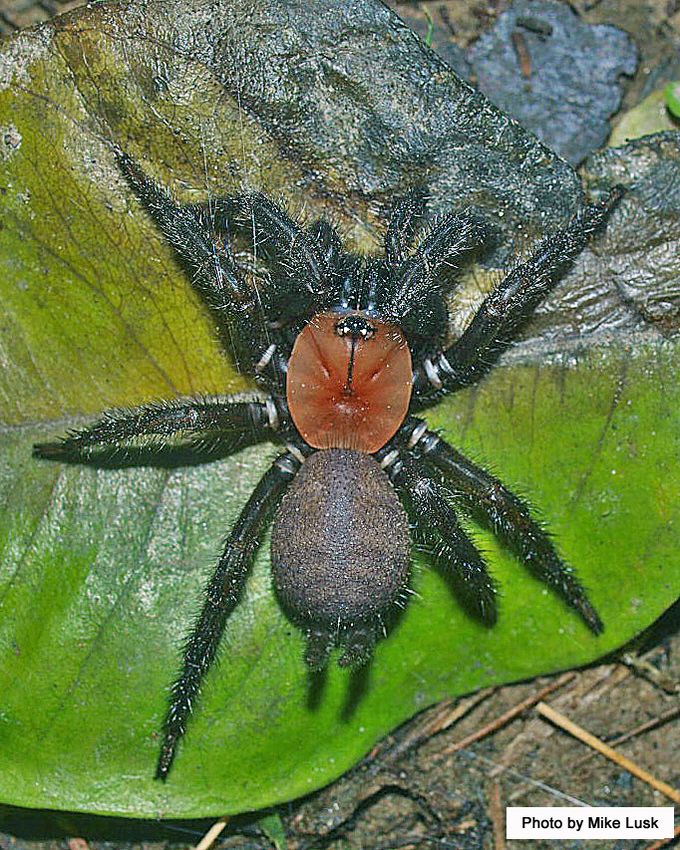