The following information is thanks to the Canadian Food Inspection Agency from their plant pest section.They are found in Europe, northern Africa, Mongolia, Siberia and Turkey and were Introduced to Australia, New Zealand, South Africa, Argentina, Brazil, Uruguay and eastern North America.
Adult wasps have four clear yellow membranous wings. Both sexes also have a stout, cylindrical body measuring 9 to 36 mm and a pointed abdomen. Males have thickened black hind legs and orange-yellow middle segments on the abdomen. Females have reddish-brown legs and a steel-blue body. Females also have a spike-like projection on their abdomen, which protects the ovipositor.

Females use their saw-like ovipositor to cut oviposition holes 12 mm into the wood of the host tree. Up to 5 holes are drilled into the outer sapwood. The spores of a symbiotic white rot fungus (Amylostereum areolatum), which are fed upon by the larvae, and a toxic mucus are injected into the sapwood by ovipositing females. Up to three eggs are laid per oviposition hole. The fungus and the mucus act together to kill the tree and create a suitable environment for developing larvae. When the bark is removed, a dark fungal stain can be seen extending vertically from each oviposition site.
Larval galleries, 5 to 20 cm long, are packed with chewed wood and a fine powdery frass. These galleries occur at all depths in the sapwood and heartwood, even to the centre of large trees. The length of the gallery and the size of the developing wasps are dependent upon the moisture content of the wood. If the wood is dry, the galleries will be short, the smaller larvae will pupate earlier and become adults at a smaller size. Mature larvae pupate close to the bark surface. 4 Adults emerge through circular emergence holes 3 to 8 mm in diameter.
Symptoms of attack also include beads of resin flowing from oviposition holes. Needles on attacked trees wilt and turn from green to yellow and finally to reddish brown. Stem growth is drastically reduced as a result of an attack. Mortality occurs in heavily infested trees. 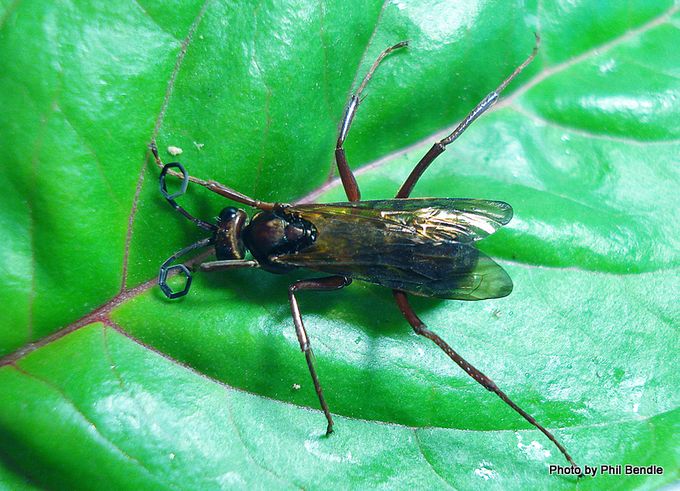 A male with orange middle segments on the abdomen 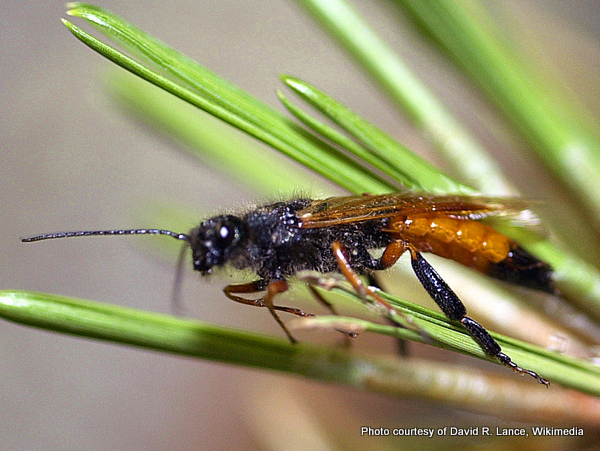