Lumbricidae is the dominant earthworms of pastures and croplands of Europe. The New Zealand lumbricid worms are all of European origin and were probably brought to New Zealand by early European settlers with soil on the roots of imported plants or in ship ballast. Lumbricidae since has become the dominant earthworms in all cultivated soils of New Zealand, with four species - Aporrectodea (= Allolobophora) caliginosa, A. trapezoides, Lumbricus rubellus, and Octolasion cyaneum - very widespread.  These Lumbricidae are topsoil species and live in soil close to the surface, where they feed on dung, dead roots and other dead plant material.

Octolasion cyaneum is a large sluggish species commonly found in the topsoil of low-fertility pastures on many soil types, the population being of the order of 100,000 per acre.found in pastures and arable land, gardens and woodlands. It lives in the topsoil.  Its diet is soil. Its typical size of an adult is 10cm. The body from the first segment to the saddle is partly or entirely pale in colour. Can vary from faint blue-grey to a pale rosy pink colour. It has a distinct yellow tail (last four or five segments). It may have a lilac blue line on the upper surface.

Earthworms are hermaphrodites: They typically have two pairs of testes, surrounded by 2 pairs of testes sacs. There are 2 or 4 pairs of seminal vesicles which produce, store and release the sperm via the male pores, and ovaries and ovipores in segment 13 that release eggs via female pores on segment 14. However, most also have one or more pairs of spermathecae (depending on the species) that are internal sacs which receive and store sperm from the other worm in copulation. Mature earthworms display a glandular ring or saddle - clitellum - on the front portion of the body. Clitellum has a function in reproduction, and its size, shape and position vary between species. 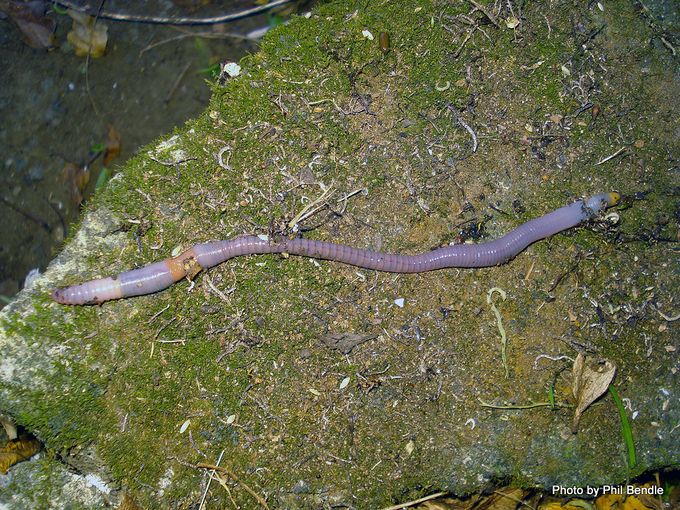